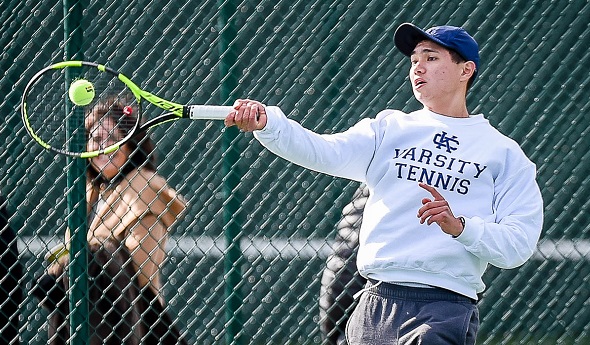 There are a lot of emotions winning an MHSAA Finals tennis championship as an underclassmen can produce, but wanting to give up the sport entirely usually is not one of them.

But that’s something that was on the mind of Bloomfield Hills Cranbrook Kingswood tennis player Lucas Bosch.

Last year as a sophomore, Bosch won the Division 3 flight title at No. 2 singles, which figured to be a great springboard into this season since he was going to take over at No. 1.

However, there was one problem.

Bosch didn’t know whether he wanted to come back at all.

“I actually took three months off just to refocus, see where my head was at and see what my goals for tennis really were,” Bosch said.

But while considering giving up the sport, there was one carrot dangling in front of Bosch that he couldn’t resist.

“I love the team atmosphere of varsity tennis,” Bosch said. “I definitely knew I wanted to come back for that.”

Because of that camaraderie, Bosch said he was excited and ready for the season to start in August, and Saturday was validation that he made the right decision.

Bosch and his teammates were on the court at The Sports Club of West Bloomfield celebrating their fourth straight Division 3 championship, and Bosch himself had another Finals flight medal.

This time it did come at No. 1 singles, as he came back after losing the first set to top rival Nikolas Gruskin of Detroit Country Day, 3-6, 6-1, 6-4.

Bosch entered as the top seed, while Gruskin was seeded second.

The match capped off a season that saw Bosch go 19-8 while playing some of the best competition in the state.

Cranbrook might be Division 3, but it always plays a loaded schedule against Division 1 and 2 powers.

One big win for Bosch came over Gabe Liss of Birmingham Groves, who was a semifinalist at No. 1 singles in the Division 2 tournament.

“I think it was exciting to see all that come together for him,” Cranbrook head coach Steve Herdoiza said. “Obviously the No. 1 singles spot in this area is very difficult. You are playing strong competition every time you are playing a match. He had well above a winning record and was competitive with some of the best guys in the state. It was a great moment for him to play at the level he did.”

During the season, the big adjustment Bosch made to his game had nothing to do with technique or physical components.

It had everything to do with the mental side, and more specifically, just having fun playing the game.

“I feel like in the past years, I would overthink sometimes,” Bosch said. “I was really trying to focus less on my strokes and techniques, and more on having fun and enjoying the atmosphere instead of technical things, because I struggled with that.”

It certainly worked, and now Bosch is looking forward to a busier offseason playing tennis than the last one.

Bosch said he is not certain he wants to play tennis in college, but he is looking forward to playing in more summer tournaments.

He already can’t wait to be out there with his teammates next fall as a senior when Cranbrook will go for its fifth Finals team title in a row.

It’s certainly a different mindset than at this time last year, when Bosch couldn’t even imagine playing, let alone celebrating another Division 3 title and a terrific individual season.

“Definitely not,” he said. “I think over the season, I definitely improved and gained confidence. This moment is surreal."