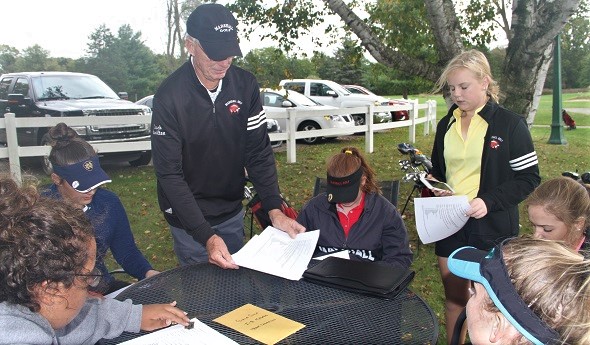 MARSHALL — When Dick Hamilton signed on to coach the Marshall girls golf team, never in his wildest dreams did he think he would still be doing so 40 years later.

He is not only alive, but thriving on working with what he calls “close to the best team I’ve had.”

After winning the Division 3 Regional on Oct. 7 at Niles, the Redhawks are headed to the MHSAA Final this Friday and Saturday at The Meadows at Grand Valley State University.

It will be the 29th time Hamilton’s teams will have competed at the Finals level and, with five seniors, he hopes this is the year to win the previously elusive championship.

Third place is the highest his teams have finished. These Redhawks are ranked third in Division 3 and finished eighth last year.

The team is led by four-year varsity golfer Karlee Malone, who was Regional medalist with an 83 at Orchard Hills Country Club.

“When I started, there was one division and everybody was in the same division,” Hamilton said. “Ironically, my first year, we hosted the state championship at Marshall High School.

“Our AD said, ‘You run it.’ It had to be the worst-run state championship in history. I was a rookie and everybody was coming in with these powerhouse teams.”

The Redhawks actually qualified for that year’s championship tournament and ended up eighth.

While the game, itself, has not changed much over the years, the coaching and the golfers have, Hamilton said.

The Michigan Interscholastic Golf Coaches Association pushed for more divisions, and today the MHSAA has four divisions for golf in the Lower Peninsula.

“There are a lot more good players now,” Hamilton said. “When I started, we were in the spring and we would just go play and that was it. 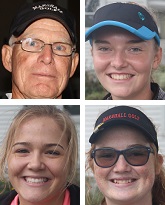 “When I started, girls were players if their dads were (golfers),” Hamilton said. “Now, out of the girls on my golf team, maybe one or two of their dads are players.

“It’s a game where they get into it, they take lessons, they go to First Tee, they go to Foundation Golf Center, they have private swing coaches and that makes a difference.”

Having the best equipment also is a plus. Hamilton had that advantage when he was growing up in the Thumb.

“My grandfather owned the local hardware store, so I got a set of golf clubs the day I went to play golf (at age 6 or 7). Not every kid in town had that.”

Another change in high school golf was the uniforms.

When he started coaching, the girls team had no specific uniforms.

“They looked at me like I was crazy. The AD bought into that, and I think that helped.”

While Hamilton did not coach any mothers of his current golfers, he did have his own two daughters on his team.

“They were basketball players who played golf when the season came on, but in those days, it was in the spring,” he said.

“They live in New York now and don’t play much anymore.”

Over the years, Hamilton has thought about giving up the position, especially once he retired from teaching history at the high school.

“A couple of times we’ve had rebuilding years, and I didn’t want to give that to anybody else so it just kind of kept going.”

These current golfers are happy he kept going.

In addition to the Regional title, the Redhawks won the Interstate 8 Athletic Conference (going undefeated) this fall, plus the conference tournament and four invitationals. 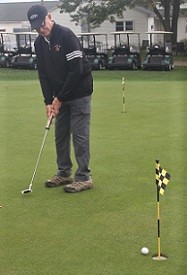 “He meets the needs of every individual player,” Malone said. “He is willing to take you aside individually and work with you.

“Golf is not only a team sport, but an individual sport, so he helps us with that aspect. But he also brings us together as a team and sets goals for us that we’re able to meet.”

After tying for fifth individually at the Division 3 Final last year, Malone said she feels a bit of pressure this season.

“I’ve been dealing with that all throughout the season,” she said. “I wanted to have an even better season than last year, so rising to those expectations has been an extra challenge.”

Marie Mathieu, another four-year varsity golfer, said with all seniors on the team, there is an advantage.

“We’ve all played together for so long that we know how to help everyone and give everyone confidence,” she said.

Another four-year varsity golfer is Emily McLane, who appreciates the coach’s sense of humor.

“He’s very encouraging, and he’s funny,” she said. “He cracks some jokes once in a while.

“Our practices are really structured. We work on chipping, we work at the range, we work at putting all the time so when we get on the course, we know what to do.”

The other two seniors are Malena Solis and Katie Kolassa. Assistant coach is Sal Konkle, who also led the Marshall girls basketball team to the Class B championship in 2016.

The Redhawks’ home course is Marshall Country Club, where Hamilton has been a member for 50 years.