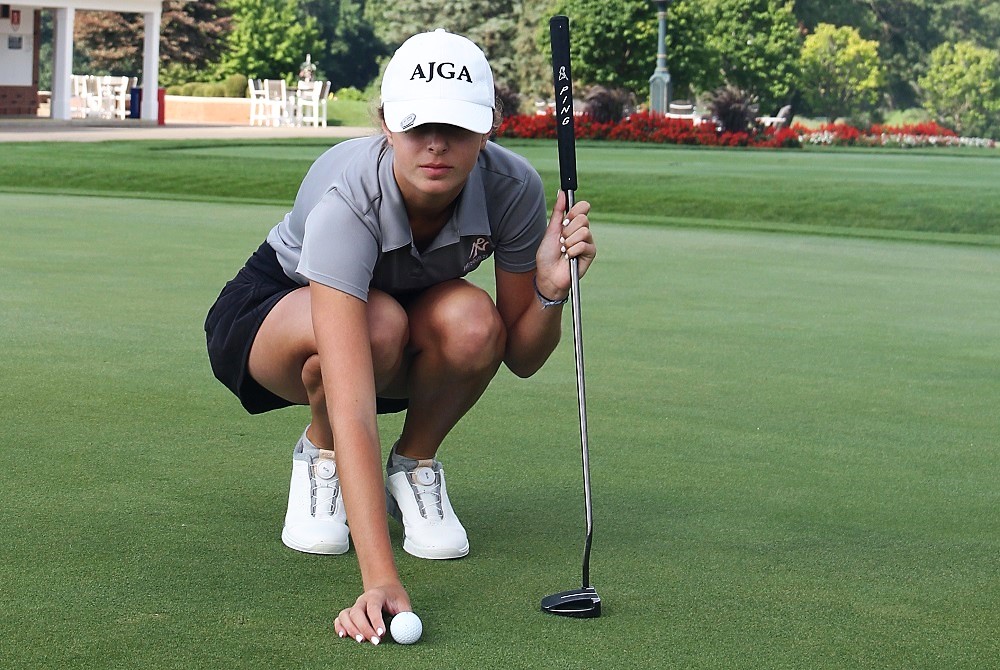 PORTAGE — When she was 4 years old, KT Leinwand’s parents joined the Kalamazoo Country Club, she said, to give their children something to do during the summer months.

Special events for children included “fun things around the (golf) course with little kids and little putt-putt matches,” Leinwand recalled this week. “They just wanted to keep me busy.”

Little did she realize that those “fun things” would lead to a passion for golf that has catapulted Leinwand into becoming one of the top high school golfers in the state.

What is more unusual is that no one in her family — her parents, three siblings or grandparents — plays golf.

By age 8, she was learning the finer points of the sport by attending clinics.

“I would come and play with my friends,” Leinwand said. “We met (KCC assistant pro at the time, now head pro) Kyle Horton, and I decided I wanted private lessons with him when I was 9.

“Kyle gave me the love of golf, and then I kept going. Then I went with another coach, Abby Pearson, and she made me love it even more. I just kept getting out there every day and playing. Been with her ever since.”

Leinwand, who turned 16 two weeks ago, is the top golfer for the Huskies.

“We have obviously a really good No. 1 golfer in KT, which offsets a lot of scoring because she’s consistently in the low- to mid-70s,” Portage Northern coach Chris Andrews said. “So that gives us a little bit of a buffer for our fourth and fifth golfers.

“This year, we really have a good No. 2 and 3 golfer. We have a handful of girls trying to get us that fourth score we need. I’m looking at if we can get 100 or less out of that fourth scorer, we could be a state qualifier.”

The No. 2 golfer is senior Zoey Quinn.

“She’s gotten to the point where she’s actually a really, really good softball player, but she’s switching her passion to golf and wants to play in college,” Andrews said. “She shoots in the 80s consistently.”

No. 3 is freshman Brooke Randall.

“She has had two good rounds so far,” Andrews said. “I see her scoring in the 80s consistently this year.

“If she gets out here the next couple weeks and plays more with KT and Zoey and just picks up some of the course management, she’s going to be a really, really good golfer as well.”

If the team does qualify for the MHSAA Finals, that would be a bonus for Leinwand, who was an individual qualifier the last two years.

Last fall, her two-day total of 148 at Bedford Valley in Battle Creek was just four strokes behind champ Gabriella Tapp of South Lyon.

If Leinwand qualifies again this year, “Gabriella will be a senior, and she’ll still be around so I’ll see her,” she laughed.

As a freshman, Leinwand finished 23rd individually in LPD2 at Michigan State’s Forest Akers West, the site of this year’s LPD2 Final. 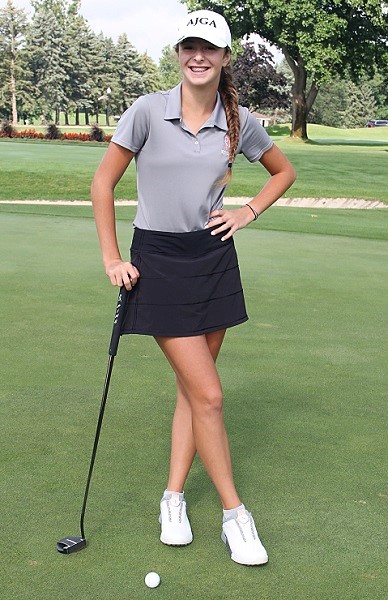 Jumping from 23rd to second in a year took a lot of work and practice, she said.

“I worked in the winter a bunch at the Dome Sports Center in Schoolcraft. I was out there all the time working on my swing,” Leinwand said. “In the summer and spring when it was finally nice out with no snow, I was playing every day.”

With no others golfers in her family, Leinwand relies on her coach and friends to hit the links.

Sometimes she will go out by herself or join up with another group, which can cause some surprises.

“I had a friend here and we played golf with my son,” he said. “KT joined us for one hole before she had to leave.

“My friend’s a scratch golfer. He was disappointed she left because he enjoyed watching her play. That’s a common reaction when people see her play.”

Leinwand credits her coach with helping her keep focus on the course.

As the Huskies baseball coach, he credits mental performance as part of the success that propelled his 2019 team to the Division 1 championship.

He also works with other teams and individual athletes in the area.

“I use a lot of mental strategies from my coach,” Leinwand said. “After a bad shot, I have to erase it and go to the next shot and totally clean slate and totally forget about that bad shot.”

However, her strength is her power off the tee, she said.

“I can hit it a good amount farther than a lot of the girls. When we’re playing short courses, I don’t always need to hit my driver off the tee, so I hit something like an iron or a wood that can be more consistent and straighter.”

Andrews looks to his junior as a role model for others on the team.

“KT brings a quiet confidence that I think the other girls can look at her and not just admire her physical ability, but her presence on the course and her presence around the course,” he said.

“She’s always in good spirits, and she doesn’t have too highs or too lows. She’s steady. Her mental game is probably her strength. She’s a good role model to the other girls to work hard and stay steady with the mental side.”