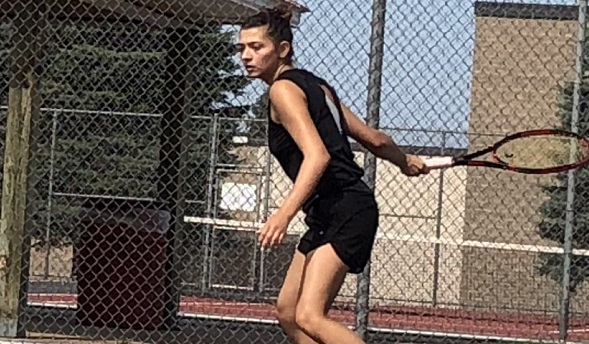 ESCANABA — Elyse Olivier has come full circle in her love for tennis.

The Marquette High School junior has been playing since eighth grade, but as part of a huge tennis family she was not into the sport until the past couple of years.

“I was never pressured to play,” she said after sweeping a pair of 6-0 decisions recently at a match at Escanaba High School. “It was always an option.”

Her dad, Wayne, is a long-time accomplished tennis fanatic. Her brother Alec, a Marquette senior, is unbeaten in three seasons with the Redmen. She also has two younger brothers.

Tennis has become a passion for Olivier, who said she didn’t like watching it just a couple of years ago. Last year she played No. 2 singles; this year she is unbeaten at No. 1.

“I just wanted to be good enough to make the varsity,” she said of her first foray into competitive tennis. To accomplish that she attended some tennis clinics and spent extensive time practicing.

“I did a lot of hitting with my dad,” she said. “He is my main coach out of season.”

“When she is on, it is fun to watch,” he said. “It is a matter of getting her to keep things even. Sometimes she is nonchalant, and sometimes she tries to hit shots she is capable of hitting but the situation doesn’t call for it.

“She has a real nice all-around game.”

Ground strokes are her strong point, which is why she prefers to lay back and hit from the baseline rather than charging the net in an attacking mode. “I’m not afraid to come up to the net. I try to be ready for anything,” she said.

There are times when the game can be frustrating “because you are playing by yourself. It is you, you and you.” She said the mental and physical aspects can also be frustrating.

Olivier is not expressive on the court, simply chasing after everything and returning shots with solid strokes. “I do talk to myself a little bit,” she said, indicating she does not want to draw attention for any antics or disrupt the other matches.

“It can be really hard out there by yourself,” she said, showing she will clench her fist after completing a successful volley. “I don’t like to yell. I don’t want to obstruct other people on the court,” she said. 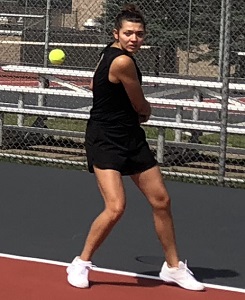 After getting her shutout at Escanaba on a windy, sun-baked afternoon, Olivier said she just tries to focus on the ball and her shot and ignore everything else. “I try not to let the wind affect me,” she said as it blew the hair around on her head.

Her love of the game is obvious as she goes about her business, then when she’s done she merely leaves the court, grabs her cellphone and talks to family and friends while walking around the court as the other matches continue.

“I am passionate about tennis. I love to be out here. I always want to play,” she said.

She has played against her brother Alec, but said “it did not go well for me. He is a lot better than me.” She also plays with her brother Nick, a Marquette freshman netter. “I can still beat him, but I don’t know for how long,” she admitted.

Olivier is hoping to get a chance to play tennis in college, then stay involved in tennis as part of a women’s group or perhaps move into coaching.

She loves the challenge of tennis, whether in matches or just hitting balls. “I am always learning about it. I am always improving. I love that,” she said.

She also enjoys playing a variety of opponents because each one provides a new and many times different challenge and style. Meanwhile she tries to improve her footwork, mobility and shot-making skills while enjoying being a part of a team.

“I’ve met so many people through tennis,” she said, indicating No. 2 player Mollie Kilpela is her best friend and they hit a lot of balls together. “We are all so different, but we do have that one thing going to tennis. It is nice to have that.

Olivier does go beyond tennis, indicating she likes to bike, draw, write about her daily life and sing. She also works at Marquette Pediatrics and thinks she may enter the dentistry field.

Denny Grall retired in 2012 after 39 years at the Escanaba Daily Press and four at the Green Bay Press-Gazette, plus 15 months for WLST radio in Escanaba; he served as the Daily Press sports editor from 1970-80 and again from 1984-2012 and currently is in a second stint as the interim in that position. Grall was inducted into the Upper Peninsula Sports Hall of Fame in 2002 and serves as its executive secretary. E-mail him at sportsdenesky@gmail.com with story ideas for the Upper Peninsula.