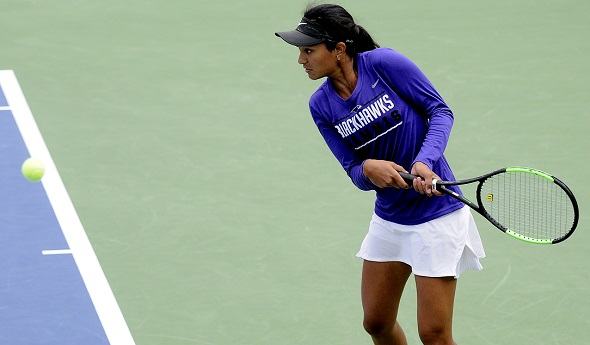 By John Walker
Special for Second Half

Mukherjee dominated for a 6-0, 6-0 win over Northville senior Shanoli Kumar in the championship match at No. 1 singles. Mukherjee lost 6-0, 6-0 last year in the finals to Ann Arbor Pioneer’s Kari Miller, and said that was motivation.

“It feels great after last year,” Mukherjee said. “That was tough. I didn’t want that to happen again. I was more prepared.

“I improved my fitness and my forehand. I did a lot of off-court conditioning. I didn’t have enough energy going into the finals last year.”

“Her fitness level is better,” he said. “Plus another year of maturity, poise and confidence. It makes a difference. She was highly motivated coming in.”

“At the end of the day, Tia was amazing,” Northville coach Linda Jones said.

“I thought she is the best player in the state,” Dobson said, “and she proved it. She played her best match and earned it.”

Northville had to earn its title, too, edging Midland Dow 32-30. Bloomfield Hills was third with 28 points.

Northville entered Saturday with 24 points and eight players in the semifinals for the first time in school history. Dow had 23 points with seven players, as did Bloomfield Hills.

Northville won key semifinals matches against Dow at No. 2 and No. 3 singles and advanced six to the finals. Dow advanced five, while Bloomfield Hills advanced three and dropped from contention.

In the finals, Northville and Dow faced off at Nos. 1, 3 and 4 doubles. Dow got the first victory, at No. 3 doubles, and briefly tied the score with a win at No. 2 doubles. But Northville prevailed in the other head-to-head matches, clinching the crown with the win at No. 4 doubles.

“It’s so sweet,” Northville’s Jones said. “This year we lost three important seniors and were seeded No. 2 all season behind Dow. We came in as underdogs. The girls just played over their levels. It’s the most satisfying (title). Three-time state champs is not too bad.”

“Absolutely there’s disappointment,” Dow coach Garrett Turner said, “which is a good thing, I guess. It means we’re doing the right things. We win one of those matches and the nerves are shifted to them. It’s hard to be upset with a second-place finish. We had our chances.”

At No. 1 doubles, Northville senior Serena Wang and junior Sophie Zhuang, the No. 1 seed, defeated Dow seniors Tatum Matthews and Kelly Livingston, the No. 2 seed, 6-1, 6-4.

At No. 3 doubles, Dow seniors Giacomina Fabiano and Christina Vanderkelen, the No. 3 seed, defeated Northville junior Madison DeYoung and freshman Michelle Tong, the No. 4 seed, 6-2, 6-3.