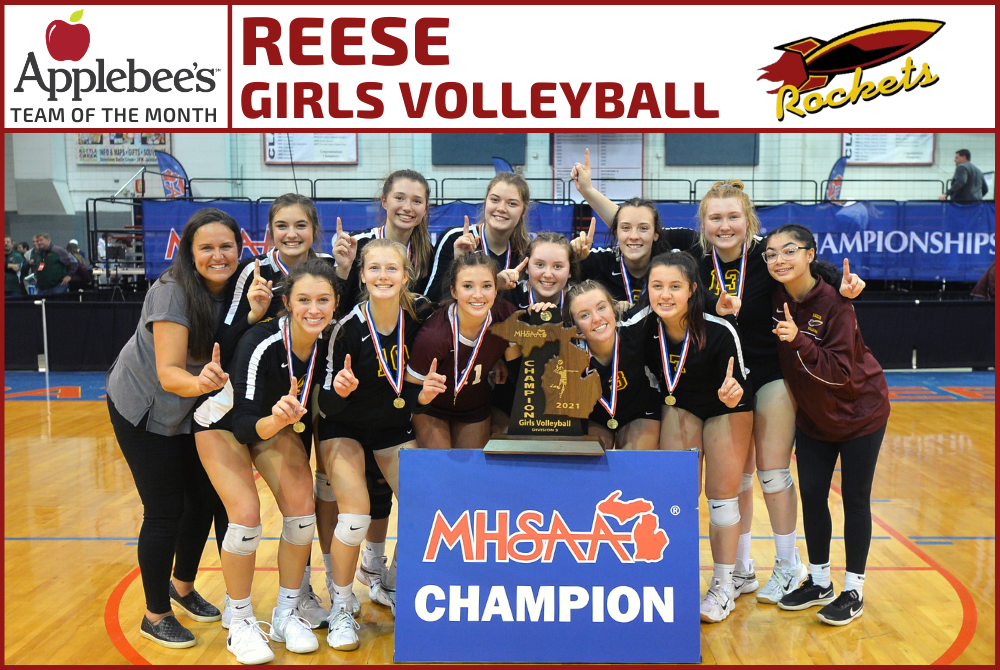 But the Rockets are still riding high like it happened yesterday – and there’s no reason to end the celebration any time soon.

As volleyball coach Angie Compton looked into the crowd during Thursday’s girls basketball game, she saw a sea of Reese championship shirts – many worn by people she’s never seen before.

“I’ll see people out, and they’re still congratulating us. The girls (Thursday) are like, ‘Oh my God, everybody is wearing our championship shirts today – the town must have all gotten them,’” Compton said. “I think so many alumni are just super excited about it. The school is still so excited for us, and other students, they know it’s a really big deal. It’s really given us something fun, and some pride.”

Reese’s volleyball team – the MHSAA/Applebee’s “Team of the Month” for November – gave us an unforgettable comeback that likely will be brought up for years to come when discussing the tournament’s most extraordinary finishes.

It’s not that the Rockets won, but how:

For starters, the Finals championship was the school’s first since the boys cross country team’s title in 1964.

Reese was up against Monroe St. Mary Catholic Central, which had won the previous two Division 3 championships and five titles total over the last 11 seasons.

The Rockets, meanwhile, had the day before played in their second Semifinal ever and first since 2010.

And then – as the story was told – the Rockets broke into some unexpected song and dance, keeping things light, and won the next two sets 25-15 and 25-21 and then the final two points of the fifth to clinch at 16-14.

Learning to find the fun in those moments, even the toughest ones, had been part of the team’s mental preparation earlier in the season, and those lessons clearly paid off. The Rockets didn’t enter the match focusing on St. Mary’s past successes, and were able to bounce back midway through the match when it seemed this golden opportunity was all but lost.

“A few years ago, if my team was in this position, I would’ve had a totally different demeanor about it – get refocused, this is what we need to do … it would have been a different talk,” Compton said of climbing out of the 0-2 deficit. “It’s because of this team, and what they respond to. … I think it’s amazing.”

Senior Maddi Osantowski’s 34 kills were the fourth-most in a championship match, senior Josie Johnson’s 29 digs tied for fourth, and senior Sarah Gray also made that digs list with 21. Senior Aydan Dalak – Compton’s daughter – just missed the list for most assists in a Final with 42.

Osantowski was named to the all-state first team after the season, while Dalak made the second and Johnson earned an honorable mention.