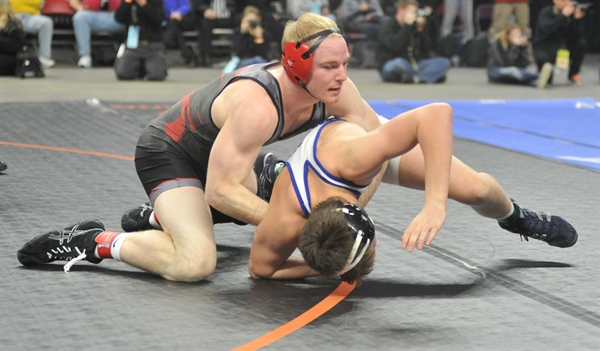 AUBURN HILLS – For Kent City senior Shane Rodenburg, winning this year’s MHSAA Finals title was not something he was doing just for himself.

He also was taking the mat with his younger brother Brendon in his heart.

Brendon, only 16, died unexpectedly Sept. 22. Bringing a 58-0 record into his 171-pound Division 4 title match against Nick Cooper of Springport, Shane Rodenburg capped off a year of wrestling that he will never forget by outlasting Cooper for a 3-0 decision.

“I don’t know what to say,” Rodenburg said, “just that this is the greatest day of my life so far. I’ve went through a lot of adversity this year, and it is such a great feeling to win it.”

Rodenburg was a three-time Finals placer coming into this weekend, having finished fifth as a freshman, third as a sophomore  and second last year. Last year’s second-place finish was a special one for Rodenburg as Brendon also made it to the medal stand, finishing sixth at 140 pounds as a sophomore.

“This title was for him,” Shane said. “I’ve always wanted to be a state champion. This one was just not for me. He was with me, and it’s for him too. This is pretty special. It feels real good.”

An early takedown paved the way for Harvey, who took the early lead and made it hold for the victory.

“It feels like I’m on cloud nine,” Harvey said, “maybe even higher than that. Getting that first takedown was big.”

After securing the takedown, Harvey built on the lead with a three-point near-fall as he utilized a cradle to get the three points.

“I’ve been working on my cradle a lot in practice,” Harvey said. “I’ve had a lot of help from my coaches and teammates. I’ve had some problems with it and the extra work paid off.”

For Baker, a senior, winning an MHSAA title came with other benefits. Like a 2014 Chevy Cruze.

“At the start of the season my grandpa (Joseph Nagel) told me he would buy me a car if I won a state title,” Baker said. “My grandpa is my idol. He is a person who has come from nothing and has proven you can accomplish anything in life. I want to be just like my grandpa.”

Baker’s grandpa couldn’t be prouder of what his grandson accomplished. Not only did he win a title, but he did it in thrilling fashion with a fall in overtime.

Like his grandfather, Baker also proved that you can accomplish anything with hard work and desire. While he has qualified for the Finals the last two years, he had yet to win a match at the tournament prior to this year.

“I’ve come a long way,” Baker said. “I just worked real hard, and I got stronger. This last two weeks I worked my butt off getting ready for this. Winning the state title is pretty wild.”’

For Griffin, it was the perfect way to wrap up a season. Not only did the Erie-Mason senior win a third MHSAA title, but he also finished the season with a perfect record.

Griffin jumped out to an early lead and never looked back as he won his final high school match to finish his career with a 157-7 record. Griffin will continue his wrestling career at Michigan State University next season.

“This is one of the happiest moments in my life,” Griffin said. “It was a little more pressure winning it this year. My first year winning it I had a shoulder injury. This year I was healthy, and if felt great.”

O’Green scored a pair of points in the second period, and that was all he needed.

“My key was not to let him get out of bounds,” O’Green said. “I just tried to keep him in the middle of the mat.”

O’Green won the first of three titles earned by Carson City-Crystal wrestlers on the day.

“We just work so hard in practice,” O’Green said. “Every practice we just go in there and work hard. It feels great to see all that hard work pay off.”

Simon was pushed to the brink but held on to not only win a championship but finish the season with an undefeated record. Up 3-2, Simon survived a late takedown attempt by Cannon to clinch the title.

“It was a little too close for comfort at the end,” Simon said. “I thought I outwrestled him throughout the match, but he was able to keep it close.”

Winning for his school also was meaningful for Simon.

“Winning the state title is pretty special,” Simon said. “We don’t get many state champions coming through Dansville.”

Time was running out for Barkovich, who needed some late dramatics to finish his high school career with a win in his final match.

Trailing Yates 8-4, Barkovich recorded a pin with less than a minute remaining.

“I was sweating it,” Barkovich said. “(Yates) was wrestling well, and I knew I was running out of time. I knew I had to do something fast. I got a left underhook to a headlock and took him down. It couldn’t be a better feeling (winning a title).”

Menck followed his teammate Barkovich on the mat and came away with a second straight title for Lawton. Like Barkovich, Menck also won a tight match over a Hesperia wrestler.

“That last escape won it,” Menck said. “There was about 30 seconds left in the match, and I knew I had to score.”

The win was extra special for Menck, one of three Lawton wrestlers who came away with championships.

“It means a lot to our program,” Menck said. “Hopefully this will pull some more kids into the program. We are graduating eight or nine seniors this year.”

Garza and Lopinski were no strangers, having met in last weekend’s Division 4 Team Final in Battle Creek. Garza came out with a win last weekend, and he claimed the win again this weekend to earn his first individual title.

Not only did Garza win team and individual MHSAA championships this season, he also ended the year with a perfect record.

“Winning the title by myself is nice,” Garza said, “but the team title was more important. We are all united like a family at the team state.”

Bell knew the question was coming, but this time it had to feel a little bit better.

Bell, whose older brother Luke won three MHSAA championships for Decatur from 2010-12, finally joined Luke with a title of his own.

“The first question was not what I wanted to answer,” Bell said. “Every time I win something, the first question is always about my brother winning also. This feels good. I’ve been working hard for this but have come up short the last couple of years.”

After watching his twin brother Darren come up short in the previous match, Dillen Decker was on a mission when he hit the mat at 160 pounds.

“I was fired up a little bit,” Decker said. “We’ve been wrestling together since the third grade. We just fell in love with the sport. After seeing his match, I was just fired up to get out there.”

The win capped an undefeated season for Decker, who was one of three Carson City-Crystal wrestlers to claim MHSAA titles.

“This feels good,” Decker said. “I put a lot of hard work into this. I placed third as a sophomore and fourth as a junior, so I really wanted this.”

Conner gave Lawton its third individual title of the day when he held off Symons 4-2. Trailing 2-1 at the end of the first period, Conner scored three points during the second to claim the win.

Conner placed fifth as a sophomore and third as a junior. This season he had to overcome a midseason illness to make it back to The Palace.

“I had to work through a little adversity this year,” Conner said. “I had a throat condition that made it hard to breath around the middle of the season. It was a difficult season, but I pushed through it.”

It was a matchup of wrestlers who had won a combined three MHSAA titles and were both champions last year. The match was as close as one would expect, with Cooper claiming a 3-1 decision to finish his senior season with a perfect record.

The title was the third in a row for Cooper, who will be wrestling for Michigan State next season.

“The first state title was the most memorable,” Cooper said. “I knew I had to stay in control in this match. This was just a great way to go out.”

With a couple of MHSAA titles under his belt, Cooper did not have as many nerves to battle this time.

“It really helps having been here before,” Cooper said. “You are still a little nervous because at the state finals anything can happen.”

Prescott capped a glittering high school career with his third straight MHSAA championship. He has not tasted defeat since his sophomore season and finished his career with a 151-4 record, having been an MHSAA runner-up as a freshman before his title run.

“This one is a relief,” Prescott said. “When the match was over and I finally won, it was such a relief. I was so glad to make my family happy and proud and make my community happy and proud.”

A three-sport athlete at Whittemore-Prescott, Ryan will be continuing his wrestling career at Northern Illinois University.

“I will be celebrating this with my mom and dad (Dennis and Elizabeth),” Prescott said. “They have been through this all the way with me. This is my last high school match and it’s a little tear-jerker at times. All of my hopes and dreams that I’ve had since a young child have come true.”