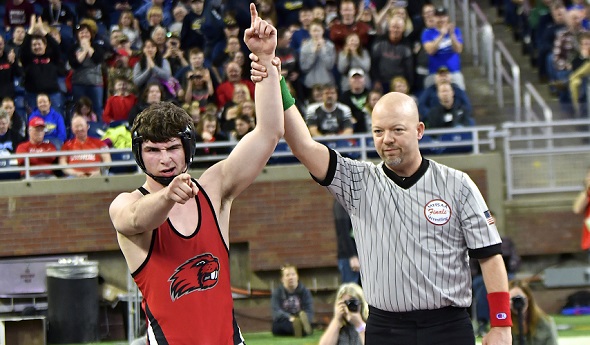 In a movie, this season and the future of the Beaverton wrestling program would be the epilogue, explained to us with words on the screen while triumphant music played.

When Eric and Kyle Cassiday won Division 4 individual MHSAA championships in back-to-back matches last season with their father Bryan – who had started the program four years earlier – coaching matside, the script could have been completed.

“It’s one of the top five moments of my entire life,” said Kyle Cassiday, now a senior at Beaverton. “(After my match) all I could focus on was Eric – he went through so much with injuries, so to see him win it was amazing.”

But while the Cassidays are certainly at the heart of the program, creating this program wasn’t just about them. And there are plenty more memories to be made.

“I wanted to provide an opportunity for the kids who had been through the youth program, and those that wanted to join, to at least experience what I experienced in high school wrestling,” Bryan Cassiday said. “We were all brothers, and I wanted them to get to be able to do that. We had a lot of help (from outside the program). We’ve had a lot of people helping to influence a lot of different kids. It’s been a wonderful experience.”

Bryan Cassiday is a Gladwin graduate who coached the youth program there. That included his sons Eric, Kyle and Jacob, who started when they were elementary and preschool age. Bryan continued to coach when the family moved to Beaverton, but there appeared to be a cap on how much time they could be involved with the sport and attend their new school, as Beaverton didn’t have a wrestling program.

When Eric was about to enter high school, the Cassidays started looking at options to transfer, going as far as having a family vote at the dinner table. Kyle voted for Beaverton. Little did he or his family know that was about to become an option.

“Some of the football coaches came to me and said, ‘What would it take to start a program?’” Bryan Cassiday said. “We put together some numbers on what it would cost, did some fundraising, and started one.”

For the kids, it was a relief.

“I was so happy,” Kyle said. “I didn’t want to leave my friends. They deserved to wrestle as much as we did. It was more than just for me.”

That first season, Beaverton had 12 or 13 wrestlers, Bryan Cassiday said, including a solid core of youth wrestlers who were finally able to stay at their home school, like Eric.

By Year 3 of the program, the three boys all were part of it, with Jacob as a freshman, Kyle a sophomore and Eric a junior.

Wrestling was and is a way of life for the Cassidays, who have a mat in the garage to train – or settle a dispute, even if that was rare and mostly in the past.

“It doesn’t matter what season it is, we’re always looking forward to wrestling,” said Jacob Cassiday, who was a Finals qualifier at 152 pounds a year ago. “We don’t wrestle much in the house. We broke a couple light fixtures, then that stopped.”

For Jacob, growing up as the youngest of four children (they have an older sister, Brooke, who is 21), allowed him to learn quite a bit. 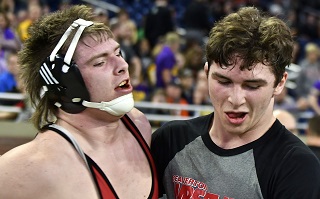 “I’ve always been the smaller one, and I’ve always had to work hard,” he said. “I never had it easy, and they never did either. I was a little pudgy, and they helped me get into shape, then helped me with getting through wrestling. They taught me how to work hard. My oldest brother Eric had probably the best motivation I’ve ever seen. He was always in the weight room or on the mat or on the football field. There was no offseason. And, of course, they taught me how to be humble, because there’s always someone out there who’s better.”

The older brothers got to see each other plenty in practice, as Kyle was at 189 pounds and Eric at 215 a year ago.

“We’re both really competitive – we love to win, it’s what we strive to do,” Kyle said. “Halfway through the year, we started to change our perspective and realized we had a chance at winning. We would point each other to different techniques. Sometimes it got pretty intense, and we’d get pretty heated.”

Brotherly tensions aren’t something Dad worries much about spilling over, though.

“Really very rarely did they ever have problems,” Bryan said. “There was a point in the season when I was trying to get everybody on edge a little bit, and there were a couple times I had to separate them, but nothing out of control; you could just tell they were wanting it. Generally speaking, to be very honest, I’ve seen siblings that argue and fight – my kids don’t do that. They hunt together, they wrestle together, they do pretty much everything together.”

They eventually won Division 4 titles together. At last winter’s Finals at Ford Field, Kyle defeated TJ Rizor of Leroy Pine River 8-1 in the 189-pound final, while Eric followed with a 4-0 win against Chase Gibson of Bronson at 215.

“There will never be a way, honestly, to describe what happened,” Bryan said. “I couldn’t talk. I was having a hard time coping with it, to be honest with you. It’s hard to become a state champion. It was the culmination of the years and years of hard work and the passion they put into it. They continued to work, and they got paid in the end.”

Kyle said his championship wouldn’t have meant nearly as much had his brother not won. It’s something they’ll be able to talk about when they’re 40, he said.

But there’s more work to do for all of the Cassidays and the program as a whole. Eric, who is now a freshman at Saginaw Valley State University, comes back home to help his dad coach. Kyle is looking to repeat as a Finals champ, and Jacob wants to take the next step at Ford Field and make his way onto the podium.

The program itself has more building to do, but it does have a solid core heading into this year as Cameron Austin and Jack Owens (fifth last season at 171) join the younger Cassidays as returning Finals qualifiers. For now, the top priority, Bryan Cassiday said, is improving every day.

In just four years, Beaverton wrestling has started to make a name for itself. Growing that name, Kyle Cassiday said, would be an even greater accomplishment that the incredible end to last season.

“I’d be more proud of building a successful program than a championship because it’s an end result,” he said. “It will be creating something for more than just me. It would be for a lot of different people.”

PHOTOS: (Top) Kyle Cassiday celebrates as he’s signaled the winner of last season’s Division 4 championship match at 189 pounds. (Middle) Eric and Kyle Cassiday share an embrace after Eric followed up with the win at 215 at Ford Field. (Click to see more from HighSchoolSportsScene.com.)