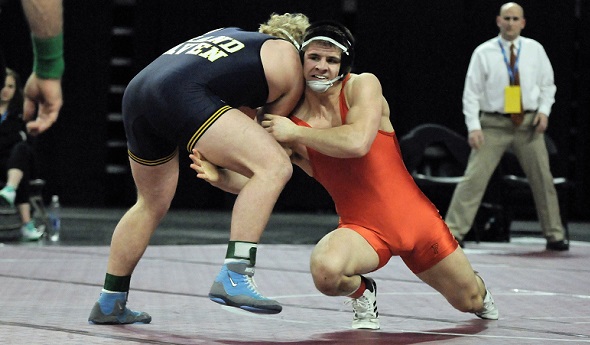 Flushing’s Ben Cushman wanted to be better than good on the wrestling mat.

After his sophomore season ended in at the MHSAA Finals, one win shy of the podium and all-state honors, Cushman decided to do everything he could to become great – to be able to compete with the state’s elite.

One hundred and one straight victories, one Division 1 individual title and a signed letter of intent to Central Michigan University later, it’s safe to say he’s accomplished that.

“I think a lot of it was just getting beat,” Cushman said. “I got beat by Brendan McRill (a former MHSAA champion from Davison), and just always got beat by guys like him. I just changed up my whole technique. Before I was just always shooting double legs. I didn’t really have a good takedown that was effective against other wrestlers.

“I really looked at a lot of film, looked at all the mistakes I made and what I could have done better.”

Cushman won the Division 1 title at 215 pounds as a junior, becoming Flushing’s first Finals champion since 2000. He’s 45-0 as a senior this winter, and he recently won a District title to keep alive his opportunity for a run at a repeat championship, although this season he’s back at 189 pounds.

He has yet to be taken down this season, allowing only escape points to his opponents through those 45 matches. He’s only been taken down once in the past two years. It’s a stunning run of dominance, and to those looking in from the outside, it appeared to come out of nowhere.

“He’s been around (wrestling) for a long time, so most people in Michigan knew who he was,” Flushing coach Andy Rishmawi said. “I think he surprised people in the way he went about it. He wrestled a lot of good kids, and last year we put him up against everybody, and he went undefeated and had one offensive point scored on him all year. So to me, I think the way he went about it, I think that surprised some people.”

It wasn’t a surprise to Rishmawi and Cushman, however, as they saw what he went through each day to get there.

“Coming into his junior year, he was just focused and ready, and working out all the time,” Rishmawi said. “In the weight room, on the mat, working on his form, working on his technique, just really understanding more how you do certain things. There was a huge growth in him.” 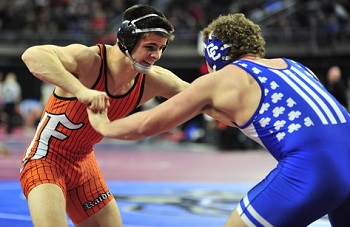 While Cushman was working to add more to his repertoire, the focus remained on simple things – and doing those simple things incredibly well.

“We would just take it day by day,” he said. “There was one thing that Coach would want me to work on, which is just pulling the elbow. We would do that for a half hour straight until I got it down perfectly, and when we would wrestle live, I would work on other moves off of that. I kept doing that until it became second nature.”

Rishmawi said the raw ability was always there with Cushman, calling him freakishly strong while at the same time extremely coachable. Because of the latter, Cushman has been able to maintain that same level of focus in practice, despite the fact he’s already established his dominance in the state.

“When you’ve dominated people and you’ve had such a good run, you wouldn’t expect to have coaches still screaming in your ear about a move you might have done wrong,” Rishmawi said. “Let’s say he’s doing a 30-second drill. We know that the person he’s wrestling against can’t keep up with him, so he needs to get six takedowns instead of five. During sprints, we’re in his face. While he’s working on a move, we’re in his face. He understands, ‘They’re really trying to help me.’”

Cushman has remained motivated, in part, by the fact he knows he has to improve to be successful when he goes to Central Michigan. He also knows that in this sport, losing his focus for one second could end this run.

“I just know that in order to get to that stage, you need to wrestle each and every match one match at a time,” he said. “You can’t advance to the state Finals without winning Districts. I really just try to stay humble, and I give the glory to God, because I know that’s why I’m doing this.”

But the training isn’t just about holding off hungry competition, it’s about feeding Cushman’s own hunger, the same that burned inside him in 2016.

“Everyone wants to knock the king off the mountain, and this year people have taken the approach, ‘I’ve got nothing to lose, this is a state champion, I’m supposed to lose,’ so they really go after me,” Cushman said. “My coach reminds me every day, ‘You’re chasing something, too. You want to win another title. You want to go to college and win a national title and be an All-American.’

“I never want to be satisfied.”