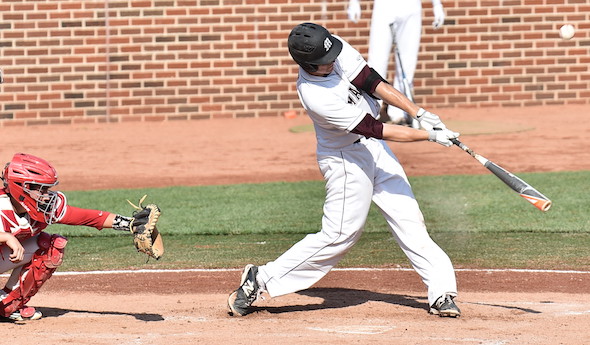 Below are links to video highlights from Saturday’s games. Click on the final scores to watch them in their entirety and purchase DVDs.

O’Keefe Goes Yard - The first home run hit in baseball at McLane Stadium since the MHSAA Finals returned to East Lansing two years ago came off the bat of Saline's Sean O'Keefe in the fifth inning against Warren DeLaSalle; it tied the game at the time.

Bush Drives In Two - Warren DeLaSalle took the lead in the sixth inning on a one-out single by Bryce Bush, which drove in two runs.

Game-Ending Double Play - With the bases loaded and one out, Warren DeLaSalle ends the Division 1 Final with a double play.

No Missing Link Here - Linden scored five times in the fourth inning to take the lead. Catcher Jamon Link delivers a bases-loaded single to drive in the first run.


The Big Hit For The Maroons - Holland Christian scored three times in the bottom of the sixth inning against Linden, the last two runs on this drive down the left field line by pitcher Mike Mokma, who also threw a complete game, striking out 14.

Two-Run Single For Fannon - The third inning saw Grosse Pointe Woods University Liggett score four times, with two of those runs coming in on this single by Sean Fannon.

Riley Hits A Rope - Parkway Christian starting pitcher Riley McManus helped his own cause in the second inning with this two-run single, which was part of a five-run at-bat.

Shamrocks Score In Seventh - Portland St. Patrick got some offense in the final inning, resulting in this RBI single by Travis Moyer.

Around The Horn Double Play - Here's a defensive gem by Macomb Dakota - a double play in the sixth inning against Farmington Hills Mercy. Mercy broke the Division 1 Final open in the next inning to win, 4-0.

Belans’ Blast - Nicole Belans took the first pitch in the top of the seventh inning over the left field fence for Farmington Hills Mercy to ignite a three-run uprising against Macomb Dakota.

Kudary Makes The Catch - A great defensive play in the Richmond-Vicksburg game came in the fifth inning when Vicksburg's Carlie Kudary ran down a Amy Thueme fly ball.

Caught At Third - An alert defensive play by Vicksburg catches two Richmond runners at third base to thwart a seventh inning threat.

Patriots Successfully Squeeze It - The only run of the Division 4 Final came in the sixth inning when Unionville Sebewaing's Marisa Morton bunted Kayla Gremel home.


Irish Tie It Up - With time winding down in regulation, Pontiac Notre Dame Prep scored on a free kick by Payton Williams to force overtime.

There’s Your Game Winner - Things went to the eighth round of penalty kicks before Rosella LoChirco came through to give Pontiac Notre Dame the Division 2 title.

VanZalen Scores - Hudsonville Unity Christian took a 1-0 lead on Flint Powers Catholic in the first half when Alaina VanZalen goes to the near side for the goal.

One-V-One Insurance - Alexis Ponstein goes on a long run and ends up one on one with the goalkeeper to get an insurance goal for Hudsonville Unity Christian in the second half.

PHOTO: A Holland Christian batter connects with a pitch during the Division 2 Baseball Final.