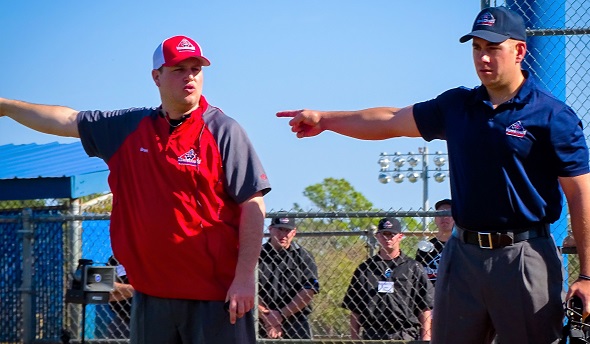 Before starting down the path toward becoming one of the nation’s most respected trainers of baseball umpires, Brent Rice was a student at small-town Concord High School who didn’t have to put much effort into succeeding academically.

But he received a challenge that has continued serving him along the way.

It came from one of his high school coaches, who said he’d go to bat for the then-senior leaving school early to begin attending the prestigious Harry Wendelstedt Umpire School in Ormond Beach, Florida. But first, Rice would have to show the higher level of effort and commitment it would take to succeed on his quest to become a professional official.

That nudge from high school sports drove Rice’s surge into officiating, and also remained with him as he decided to come home and serve Michigan’s high schools – with nearly two decades of teaching and training experience to guide him as an assistant director for the Michigan High School Athletic Association.

Rice, who went on to umpire minor league baseball for 12 years and become administrative director and chief of instruction for the Wendelstedt school, has been named to an MHSAA assistant director’s position, effective August 13. He will be charged with supervising the nearly 10,000 registered officials in all sports and also serve as the MHSAA’s director of baseball and assist with softball.

“I went to a small school, and I learned a lot of life lessons through that and I want to be able to give back,” Rice said. “It’s where I got my start, and where I want to finish up.”

The Wendelstedt school is the most highly-attended professional umpire school in the world, and Rice has served as chief of instruction since Sept. 2000 while adding responsibilities as administrative director in Jan. 2005. Rice also umpired at various levels of minor league baseball from 2000-12, including as a crew chief, and has directed or contributed to training publications referred to by thousands of professional umpires worldwide.

Rice, 36, graduated from Concord High School in 2000 and has a bachelor’s degree from Western Michigan University. He began attending Wendelstedt as a student while a senior at Concord and currently umpires at the Division I college level in the Big Ten and Atlantic Coast Conference. He moved to Battle Creek from New Orleans four years ago, and since returning to this state has been registered as an MHSAA official for baseball, volleyball and 11 and 8-player football, working as part of a regular football crew.

He was selected for the assistant director position from a pool of nearly 70 applicants.

"Brent Rice has devoted his career to preparing the next generations of officials, and he will provide great expertise in growing our efforts to recruit, retain and train officials in all of our sports," said newly-appointed MHSAA Executive Director Mark Uyl, who formerly served as assistant director and the association's coordinator of officials. "He is a national leader in teaching and training and has been a much sought-after speaker and clinician for many years, yet brings knowledge and passion for Michigan and educational athletics.

“His experience, work ethic and relationship-building skills will make him a valuable addition to the MHSAA staff."

Rice will draw on nearly two decades of experience in administration and rules interpretation in addition to his on-field umpiring experience.

While at Wendelstedt, Rice supervised 30 Minor and Major League Baseball instructors and developed the curriculum for training future professional umpires. He led the day-to-day operations of the program, and also presented daily classroom lectures on rules and directed staff demonstrations of field mechanics. 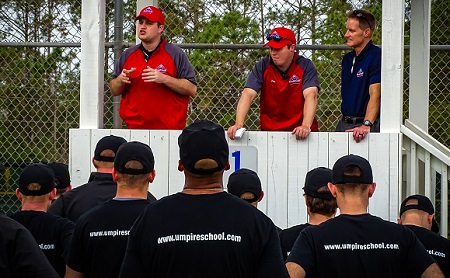 As the school’s administrative director, Rice was responsible for maintaining registration and enrollment records and developing programs to increase enrollment. Among his successful initiatives were recruiting programs that focused on engaging college student-athletes and military veterans.

He has directed the design, composition and annual revision of the school’s Official Baseball Rules and Interpretation Manual, the go-to source for umpires at all levels across the country and internationally. Rice also is a regular contributor to officiating publications and in the production of video training packages, and has been commissioned to rewrite the Official Baseball Rules manual used at all levels of the professional game.

Additionally, Rice has worked with both Minor League and Major League Baseball to develop various protocols and has served as a consultant for the Chinese Professional Baseball League, Korean Baseball Organization and the summer collegiate Northwoods League, as well as USA Fencing.

One area Rice would like to start work on immediately at the MHSAA revolves around tackling poor sportsmanship – a main factor driving officials away from the avocation.

Rice doesn’t see recruiting officials as the most difficult part of bolstering the MHSAA’s ranks; it’s retaining them.

“For me, the challenge is to try to find incentives outside of the box in some way … find other things to bring them along, make them feel supported and ultimately stay with you,” Rice said.

Rice played football and baseball as a student at Concord. He is working toward a master’s degree in public administration to go with his bachelor’s from WMU in political science and sociology. He and his wife Jenna have two daughters.