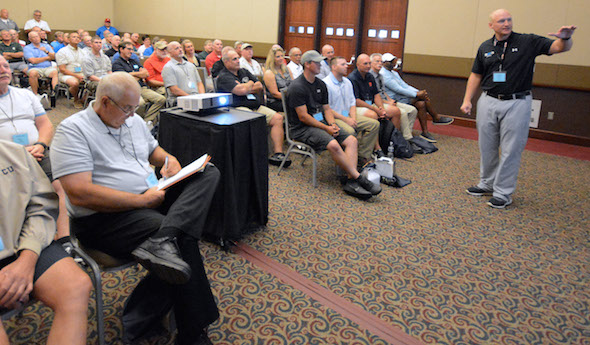 LANSING – More than 500 Michigan officials, from beginners to veterans with decades of experience, gathered Saturday at the Lansing Center for “Officiate Michigan Day II” – an opportunity to learn and train with experts in the avocation and share their passion for playing an irreplaceable role in high school sports.

They were greeted by MHSAA Executive Director and past College World Series baseball umpire Mark Uyl, and sent forth at the conclusion by retired wrestling official James C. McCloughan, who received the Medal of Honor in 2017 for his military service in Vietnam as a combat medic with the U.S. Army.

In between, attendees took in multiple sport-specific training sessions. Lunchtime panels provided opportunities to learn and interact on a number of topics, from effective communication to training and mentoring new officials.

“I hope to get a lot of things from a lot of experienced officials,” said Lansing’s Ken Black Jr., a first-year official, as he prepared to dive into the day’s opportunities. “This is my first year doing it, and I want to digest everything they have to say and go from there.”

Below are a pair of videos from Saturday’s event. The first gives a few glances at what attendees experienced – including a session with recently-hired MHSAA coordinator of officials Brent Rice – and also includes comments from officials explaining why they made the trip.

The second video shows the final minute of McCloughan’s closing, where he salutes veterans in attendance and gives a special musical tribute.