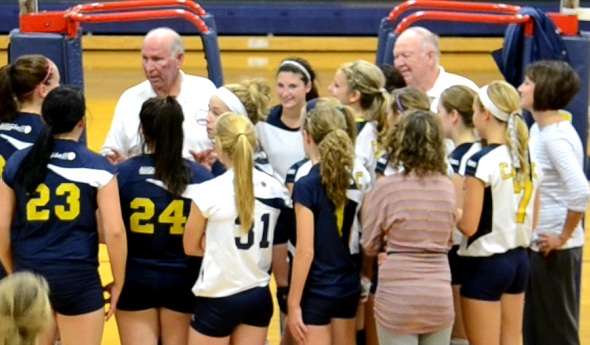 Beryl Hager read something about officiating recently that struck him.

People will never forget a bad call, and they’ll never remember a good one.

“That’s the way it is,” the longtime official from Marlette said. “Realistically, everyone makes a bad call.”

But the calls, good and bad, are not what Hager and longtime partner Vern Geister will remember most from their combined 90 years in Michigan high school athletics, which "tentatively" came to an end this fall.

The former high school classmates have a standing dinner double date with their wives. When that time comes, they’ll each celebrate more than four decades as MHSAA officials, including many years working side-by-side on the football field and most recently the volleyball court.

Frequently working five days a week over the decades, they've facilitated hundreds of games and benefited thousands of athletes, mostly in the Thumb area. They've officiated Capac’s volleyball invitational over the tenures of three athletic directors. Hager worked basketball games in the school’s Harry C. Moore Gymnasium when Moore was the basketball coach – Moore died in 1986.

“They have just great attitudes. They’re always wonderful with our kids,” Capac athletic director Arnie VandeMark said. “And you just wouldn't believe the stories they told us. They've been here a long time.”

A book full of memories

Hager wishes he’d kept a diary of his officiating career, which began in 1967.

Some of his most vivid memories are perhaps not what you’d expect.

“I saw some dreadful injuries,” he said. “I saw a young man break a thigh bone, and he was in shock and didn't feel any pain. One night at a volleyball match, a girl broke her ankle, came down on somebody’s foot. One night at a basketball game, two guys were playing and one jumped up and the other was behind him, trailing him, and four teeth went flying through the air. The front one came down on his back, the other came down on his face. Both were out.”

But the far greater number of his football, basketball, volleyball and baseball games were without incident – just as an official would have them.

Hager always enjoyed sports. He was involved in Little League baseball and has taught Sunday school at his church for 55 years. Officiating seemed a great way to blend his enjoyment of sports and people.

Plus it worked into his schedule. He could pick up games that didn't conflict with his jobs in farming and later facility maintenance. His son graduated in 1983, and aside from one half of one football game, he didn't miss an event. For a short while at the start, Hager's his wife Lois officiated with him.

He also was among pioneers in one of his sports, officiating volleyball from its MHSAA start in 1976. He’s worked a number of District tournaments and a handful of Regionals over the years – and like many things over 45 seasons, watched that sport come a long way.

“I didn't know anything about it. Nor did anyone else,” Hager said. “It’s changed tremendously in the last 35 years. When we started, if they could get the ball over the net, and hit it back, we were doing really well. Now, one guys told me volleyball is not a game. It’s a science.”

He’d done so for his son’s little league baseball team for five years, but knew his chances to continue were few. At that point in time during the 1950s, nearly all coaches also were teachers.

Before retiring in 1997, Geister worked first in the mobile home industry, then for the Kroger company before serving for more than 16 years as a Sanilac County magistrate. Officiating seemed like the next best way to stay involved with athletics.

“It was kind of a natural thing to get started,” he said.

“I think it makes you feel younger than you really are, just being with the athletes.”

Geister, who had caught for the Marlette baseball team before graduating in 1949, began officiating that sport before picking up football, basketball, softball and eventually volleyball. He got heaviest into that last after a knee replacement in 1997 made it difficult to keep up on the football field and basketball court.

But he did have a chance to officiate at the highest high school level, working the 1983 Class D Football Final at the Pontiac Silverdome between St. Ignace and Mendon. Geister also officiated Semifinals and some high-level baseball playoffs.

One football Regional sticks out most. Elkton-Pigeon-Bay Port and now-closed Detroit DePorres matched up at Flint’s Atwood Stadium. A storm had come through and dropped a good amount of snow. That was cleared, but a sheet of ice was left behind.

Back then, four people made up an officiating crew – now it is five – which would've made keeping up with the players pretty tough. The good news, perhaps, was that the players had a hard time keeping upright on the slippery turf as well.

Geister said for him, the best part of officiating has been the friends he’s had the opportunity to make and maintain over the years.

They'll always remember a third partner who died in 1978.

Classmate Andy McSkulin had been a freshman at Marlette when Geister was a senior in 1948-49 and a senior when Hager was a freshman. He became an MHSAA official around the same time those two started up.

The three did a number of games together and worked on the same football crew at times. They knew each other well before, but got to know each other even better.

Hager has never gotten riled easily, and gave out only a few technical fouls over the years. But he remembered working a basketball game with McSkulin during which his partner knew Hager was about to assess one – McSkulin “said he could see the fire in my eyes.”

For the last 15 seasons, Hager and Geister have worked volleyball matches together. They bring a professional but fun atmosphere to their games.

They’re known for joking with each other. They've never had an argument.

And although Geister doesn't completely agree, Hager said he and his partner’s retirement is only tentative. They've discussed coming back for a few junior varsity or junior high games next fall.

Neither belongs to a local officials association or has a computer. But both have still gotten calls from local athletic directors like VandeMark, who appreciate their knowledge and approach in working their games.

“I think what you enjoy is having the respect of the players and coaches,” Geister said. “I think you get to the point where it’s the pride of feeling you've done your best, done a good job and that they appreciate it.”

PHOTO: Officials Beryl Hager (left) and Vern Geister are congratulated by members of the Capac freshman, junior varsity and varsity volleyball teams while being honored for their combined 90 years of service during a match last month. (Photo courtesy of Capac athletics.)