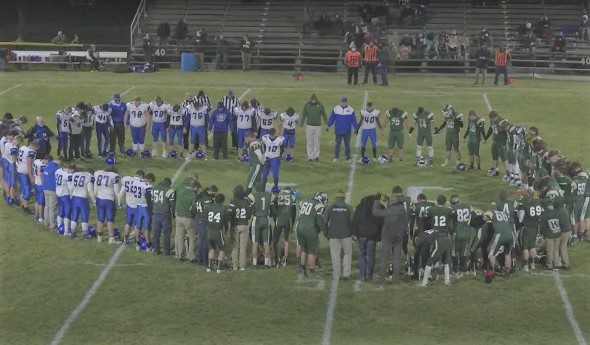 MORENCI – Before referee Jerry Hoffman died that Friday night, he knew the two football teams were going to gather in the center of the football field to pray for him.

“They were starting to take him off the field and I went to him and told him that we were going to circle up and pray for him,” Sand Creek football coach Scott Gallagher said. “He said, ‘Thank you Scott. I appreciate your faith.’”

A short time later, while he was being readied to be transported from ProMedica Charles and Virginia Hickman Hospital in Adrian to Toledo Hospital, Hoffman, 78, died. A football referee for decades, Hoffman’s last assignment ended up being the Oct. 30 Sand Creek-Pittsford playoff game.

During the game Hoffman, who was one of the line judges, dropped to a knee and collapsed. At times he was unconscious on the field. Medical personnel raced onto the field to assist him. At one point he said he wanted to sit up, but quickly went back to the ground.

“They responded immediately,” said Sand Creek athletic director Robert Wright, who has known Hoffman for more than 35 years. “They were right there with him. When I got to him, I was able to tell him that I would call Dan (his son). There was this calmness through it all because we had the right people there to take care of it.”

His son, a longtime area educator, football coach and track coach, Dan Hoffman, said he and his family were touched by how the players, coaches and fans from the two schools came together.

“What a blessing we have in these small schools,” said Dan Hoffman. “I don’t think they could have responded in a better way.”

Jerry Hoffman was a native of Wauseon, Ohio. He and his wife, Mary Ann, moved to Morenci in 1966. He worked at a variety of jobs, from a chemical company in Weston to being self-employed for a long time. While not working, he did things like garden. One of his passions was being involved in sports as an umpire and referee.

“He had probably been to Sand Creek hundreds of times to referee a football game or baseball game or basketball,” Wright said. “His heart was always with kids. He was a great guy – always had a smile on his face.”

Dan Hoffman said his dad was a referee when he was young, then stepped away from it when he and his siblings were in high school to watch them participate in sports. He picked it back up a few years ago and was not really thinking about getting out of it despite being 78 years old.

“He was a hard worker,” Dan said. “He taught us that. He loved many things, but being a referee was one of them. We would talk about him retiring, and he said he wanted to referee football until he was 80. This year he thought he was going to cut back on basketball, but then his schedule started filling up.

“He loved being out there, out with the kids and giving back.”

“He kept living, that’s for sure,” Dan Hoffman said. “He always wanted to push things. Everything he did, he did to extreme. He taught us a lot."

“He really loved doing it,” she said. “He was there for the right reasons, the kids. He was always really kind. He’d arrive early and always talk with the kids.”

Jerry and Mary Ann had seven children, 16 grandchildren and 12 great-grandchildren. They were foster parents to more than 20 children over the years.

“He rubbed a lot of elbows with a lot of people, especially in Morenci,” Dan said. “He volunteered a lot, served on some boards. He definitely made an impact on his community.”

Sand Creek and Pittsford were in the middle of their playoff game on Ernie Ayers Field at Sand Creek when Hoffman collapsed. Gallagher and Pittsford head coach Mike Burger met and decided to circle the players up. The photo has been widely circulated on social media the last couple of days.

One of Sand Creek’s captains, Jackson Marsh, helped organize the prayer and spoke to the two teams.

“I saw the referees blowing the whistle and stopping the play,” said Marsh, a senior. “Someone said they saw him grab his heart. When I heard that I was like ‘Oh, no. That is not good.’”

Marsh said the two teams went to their respective sidelines and he and a teammate began praying. When the teams came together on the field, he led the prayer.

“I just prayed the Lord be with him and watch over his family,” Marsh said. “You hear about things like that, but you never expect to go through it. For me, it did not really click until after the game and we were walking off. That’s when it hit me what had happened.”

Hoffman said he saw the photo on social media late Friday, and it brought tears to his eyes.

“My dad loved great displays of sportsmanship, and I’m sure he would have loved to see that,” Dan Hoffman said. “When I saw the picture of the two teams circling up, I just thought it was an unbelievable display of compassion. Our family was touched by that.”