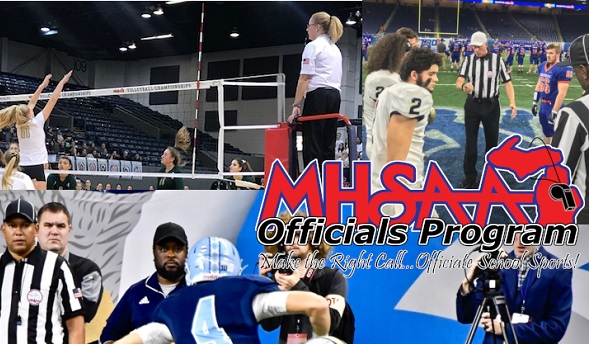 Winter is upon us at the MHSAA, and as we switch up seasons we salute the many who contributed to fall’s championship events and preview changes on the way for the MHSAA Officials Program.

Transitions: As we transition from the fall to winter sports seasons, it is fitting that we discuss some expected changes in the MHSAA Officials Program. Proposals are being developed and sent to the Representative Council to resolve a number of issues – and additional changes are expected over the coming year. The goal of these changes is to provide MHSAA member schools with the most competent and qualified officials to choose from for regular-season contests, to improve sportsmanship amongst staff, students and spectators; and to increase the compensation and benefits that come with being registered as an official with the MHSAA.

To ensure that our member schools have access to the best and brightest officials, new education and accountability standards are being put in place. Also included will be cost-effective options for training – recognizing and featuring quality camps/clinics around the state and the development of a formal mentorship program.

Improving sportsmanship continues to be a priority of the MHSAA and the Officials Program. This cannot be addressed solely by the schools and the Association. The officials are the first line of defense in ensuring good sportsmanship. We are developing a “Personal Attack” policy that will assist and support officials in the implementation of corrective decision-making when necessary. Additionally, we are developing an “Official Thanks” campaign that recognizes and shows appreciation for the officials of MHSAA contests. The Game Day Ambassador Program is another initiative designed to put a face with the names of the officials for our schools and to provide schools with resources that explain what minimal efforts can be made to improve the officials’ experience.

Finally, benefits and compensation are being reviewed, and increases are due. We are evaluating the best way to increase compensation for postseason tournaments and what other benefits of registration would provide value to MHSAA officials. If you have ideas for incentives or additions you think would be beneficial to our officials, please let me know at brent@mhsaa.com.

Postseason Tournament Consideration: Winter Rules Meetings and Rules Tests for tournament consideration are due by Dec. 13, 2018. Make certain to complete all of these requirements, along with the submission of your schedules, to ensure you are eligible to officiate this postseason.

‘Official View’ Submissions: Winter officials – we need more submitted photos and stories showing all sides of officiating. If you have pictures of you and your fellow officials that can offer an inside look into the officiating world, please send them to brent@mhsaa.com. We need a picture (or two) and the who, what, when and where. The more interesting the photo/story, the better.

We also continue to request “Official of the Month” nominations. If you have someone you think represents the MHSAA and the Officials Program well (and is a Winter sport official), send the official’s information and a brief note letting us know why you are making the recommendation.

Thank You: Thank you to all of the officials who responded to questions regarding proposed changes in the registration benefits and format. The information was very useful for us in determining what is in the best interests of all MHSAA-registered officials in regards to security, education, training and value.

For those who didn’t receive a request for feedback, don’t worry. No decisions have been finalized, and we will be sure to keep you posted of changes moving forward.

BASKETBALL With three seconds remaining on the clock and the game tied, A1 is attempting a throw-in from B’s end line. As A1 holds the ball over the plane of the end line, B1 quickly grabs the ball from A1 and lays it into the basket as time expires.

Ruling: Two points for Team B. The basket counts, and the game is over.

WRESTLING This week’s clip shows a wrestler secure a single-leg trap. Then, as it appears he has an easy opportunity to trip the other leg for a takedown, he picks up his opponent and slams him to the mat. What’s the call?

Last IYC Ruling: The last “It’s Your Call” clip showed a backrow player in volleyball land in front of the attack line following a successful jump attack from behind the line. Because the player’s feet leapt from a position established behind the attack line, this attack is a legal back row attack. (Click to see video.)

We want to take a quick moment to recognize and thank the officials assigned to our fall postseason tournament Finals. We received very good feedback about the quality and consistency of officiating during our entire postseason. Your efforts are appreciated, and we understand that without your commitment and sacrifices, we could not host such tremendous events for our member schools and student-athletes.

Here are the Finals officials assigned for each fall sport: