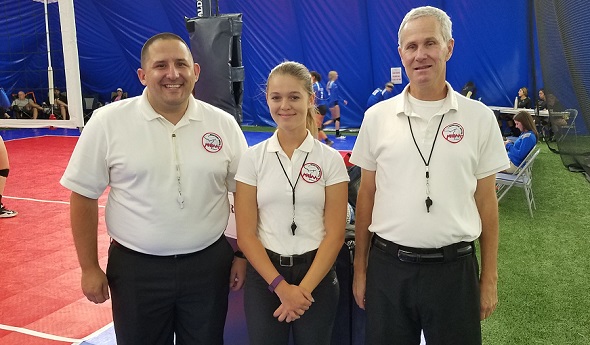 In this week’s edition, check out the latest news on the MHSAA’s Officials Review Committee and Officials Guidebook, rules scenarios to consider in football and swimming and a quick story of multiple generations learning through the Legacy Program.

The Officials Guidebook will be released in the upcoming week. Whether you’re an official, assigner, or association leader, please take some time to review its policies, requirements, and restrictions. It should have much of the information you need regarding the administrative duties of MHSAA officiating.

FOOTBALL Late in a tight contest, A1 receives the snap and attempts to throw a bubble screen to a stacked receiver behind A1’s position. As A1’s arm motion begins forward in his attempt to make the backward pass, it is contacted by rushing B1 and is knocked loose. Team B falls on top of the ball.

Ruling: This is a turnover and Team B’s ball. Even though the arm motion is coming forward, this is not a legal forward pass because it is not in the direction of the line of scrimmage. As a result, this is a fumble and live ball until it is recovered by Team B.

SWIMMING This week’s clip involves determining the legality of a turn in swim. The swimmer is participating in a 100-yard backstroke race. This clip begins at the point where he is beginning his turn. Is this a legal turn in this backstroke event? Why or why not? Check back next week for the correct ruling. (Video courtesy of USA Swimming.)

In 1996, Dana Fuller (far left in top photo) was a Legacy official under the tutelage of mentor official Jerry Sosnowski (far right). Things came full circle at a recent volleyball contest while working with his new Legacy mentee, Olivia Kostiz, when all three generations of the Legacy program were able to work together.