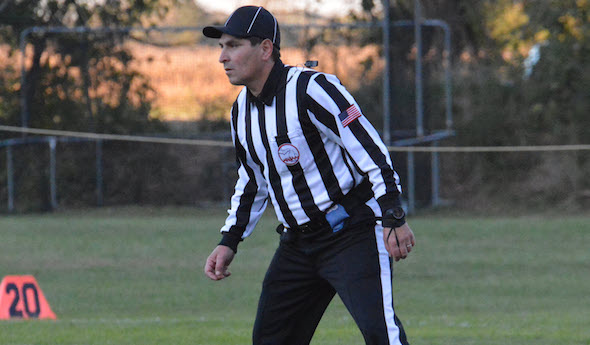 TEMPERANCE – Clyde Canales says his life experiences have prepared him for this. Bryant Moore says his new role as a football referee has taught him a new respect for the game. And Herb Bertz says he signed up to stay part of a game that has meant so much to his family the last several years.

The three southeast Michigan men are among new high school football officiating recruits for the Michigan High School Athletic Association. And they are a welcome addition to the ranks.

More and more, the lack of high school officials is starting to take its toll, forcing game times to be shifted and leaving athletic directors scrambling to fill crews for sub-varsity and even varsity games.

The shortage has hit southeast Michigan particularly hard. Earlier this season, multiple Tri-County Conference and Lenawee County Athletic Association games were moved from the traditional Friday night under lights start time to Saturday morning. There are several reasons contributing to this shortage – among them officials retiring, some leagues moving toward seven-man crews instead of five and the lack of sportsmanship being shown by adults.

Bertz has watched his sons play the last several years for Ottawa Lake Whiteford. He’s been on the chain gang for much of that time, volunteering his time and getting an on-the-field view of the games. He became a referee just this year.

Bertz said he’s worked about 40 games this fall, at all levels, and is already putting together a schedule for next year with a crew made up of all second-year officials. He said his experience has been great. The players, he said, are for the most part very respectful of officials. If the adults are yelling from the stands, he says, he’s able to tune them out.

“I don’t let any of that bother me; I just don’t,” Bertz said. “If you understand that football is an emotional game and emotions are going to run high out there, you won’t let that stuff bother you. Some people are rude, sure, but that doesn’t bother me. If it does bother you, you probably shouldn’t be a ref.”

Two years ago, Moore was a two-way starter for the Sand Creek football team. The only time he worried about the referees was when he’d spot a yellow flag on the field. Now, he’s carrying the flag around and throwing it when necessary.

“Most of the experience has been good,” he said. “Coaches for the most part are supportive, but they’ll let you know when you screw up. You have to be thick-skinned, that’s for sure. It gives you a new perspective and respect for the referee. As a player, you think it would be easy to step into their shoes. It’s not easy being a referee.”

The shortage, he said, is real. He has received text messages and calls on game days asking if he is available. Most of his weeks are filled with football nights, something he is juggling around attending Adrian College. The money he’s earned helps pay the bills, he said, and he’s learned a lot about the sport and interacting with others.

“The more you go out there and do it, the more comfortable you get,” he said. “I’ve been busy every week. They definitely need us.”

Canales was a member of Erie Mason’s 1987 Class C championship football team. He’s worked several jobs since then, from being in the restaurant business to probation officer. He signed up to be an official this year for the first time. He’s working games almost every day of the week, from youth games to varsity competition. And, he said, it’s been an eye-opening ride.

“The first few times, I felt bad taking their money,” Canales said. “I felt like I was out there to give back and these organizations needed the money. After a while, though, for all you have to go through, I don’t mind taking the money.”

For the most part, Canales said, it’s been a positive experience becoming a registered MHSAA official. He researched the rules, took online tests and went through a training period. He had the idea to become a referee because of a shortage of officials that has hit the region, state and, really, the country.

“This is my first year, so it’s good to have a lot of things thrown at me,” said Canales, 49. “Everyone thinks they can make the right call from the stands. It’s not that easy. But, I’m doing this now. I’m enjoying it. I think I’ve made it through the rough times.”

If he and the others do continue being a referee, that’s good news to the MHSAA. Once a referee has been working games for three years, officials say, they tend to stay with it.

The reasons officials cite most when they leave the sport is they are getting older and don’t feel they can continue to perform at the level they want, work or family changes and adult sportsmanship.

The MHSAA held an in-service for athletic directors this month and one of the topics was the situation with officials.

“In 2006-07, there were 12,000 officials; today there are 10,000,” said Whiteford athletic director Jason Mensing. “The numbers are going down. If we want to continue playing games, we need to have people that are willing to step up and do those jobs.”

Mensing said new guys like Canales, Bertz and Moore need to be welcomed.

“Our goal as an athletic department is to show them more gratitude if we can,” he said. “We’ll continue to work with our coaches and our community to make sure we are showing them great respect. They aren’t making a lot of money, but they are giving back to the game. It’s something we should be appreciative of.”

The MHSAA has a new executive director and director of officials. They have worked on initiatives to bring attention to the issue and recruit more officials to the avocation, while also developing strategies to retain those currently taking part.

“There is still a shortage in all sports,” he said. “We had three scheduled for one of our soccer matches, but due to a shortage one was pulled to fill in another match. This is not just a Michigan issue, as there are stories across the country about the same issue.”

Babbitt said if everyone showed a little more respect for the game and officials, the situation likely would improve.

“Officiating is one of the few professions where you are expected to be perfect on day one,” he said, “and get better from there.”

The MHSAA and National Association of Sports Officials (NASO) encourage all interested to consider becoming an official. Click to check out MHSAA resources and the NASO's "Say Yes to Officiating" website.