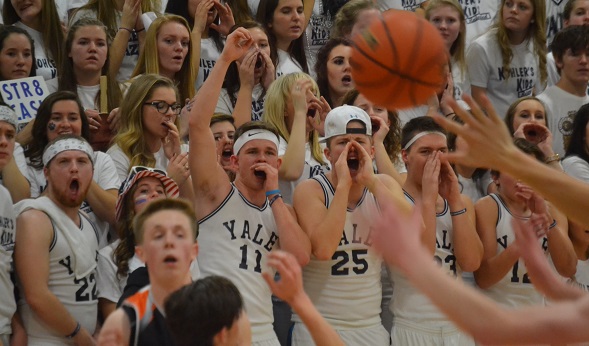 YALE – For eight years, Yale’s student section has borne his name – out of respect and also a desire to emulate the intensity of the leader of one of the school’s most successful teams.

Bulldogs boys basketball coach Garnett Kohler has made sure the leaders of “Kohler’s Kids” know he wants the section to be their thing and its direction based on their decisions.

But he’s also made it known he – like many in the community – is a fan of theirs as well.

“He pulled me aside and said he heard I was one of the leaders this year. He said, ‘I wanted you to know you’re part of the basketball family this year, and you’ve got to represent well,’” senior Austin Mabry said. “It was a lot to take in.”

And also recognition for what Kohler’s Kids have become, especially over the last two seasons, as supporters and homecourt advantage providers for the school’s boys basketball team.

Yale’s student section is in the running again to become known as Michigan’s top high school student section as the lone returning finalist for this season’s Battle of the Fans V. The MHSAA kicked off its finalists tour Friday with Yale’s boys basketball game against Armada. Visits are scheduled over the next month to Muskegon Western Michigan Christian, Traverse City West, Munising and Charlotte leading up to the naming of this year’s champion Feb. 19. The public may vote for its favorite on the MHSAA’s Facebook, Twitter and Instagram sites beginning Feb. 16, with the MHSAA Student Advisory Council taking that vote into consideration when selecting the champion after that vote has concluded.

Roughly 400 students including a few rows of middle schoolers filled a quarter of Yale’s gym Friday night, similar to last year’s BOTF visit – but also with a few key differences.

First, the section’s got a new name, as is tradition (as long as Kohler’s is part of it). But this name actually is an old one. Yale’s students took on the name Kohler’s Kids when the coach was hired in 2010, then evolved to Kohler’s Krew and Kohler’s Krazies last year before returning to their roots this season as Kohler’s Kids Reloaded.

Most noticeably, the section now includes a band – and not just a small group of pep players filling in. Roughly 50 band members anchored the edge of the section, providing another layer of sound to the roar that’s become synonymous with Kohler’s Krew/Krazies/Kids – and earned them mention with a “Bring the Noise Award” during Battle of the Fans IV.

They’ve been bringing the noise on social media like never before as well. On Twitter, @yalesquad has become the mode of communication not just to announce theme nights as in past years, but also as the main way to keep the large following revved and in line – not the easiest task when trying to point a few hundred classmates in the same direction. 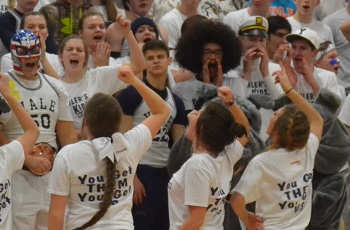 Also different: Leadership. The group running the show this season is almost entirely different than a large group of mostly now-graduates who put Yale’s section on the cheering map last winter – and that effective passing of the reins will continue to benefit the section for years to come.

The six leaders this winter also are athletes – four play football, a few play baseball, one plays volleyball and another golf. Senior Rachel Stawecki was part of the main leadership group last year and is joined by Mabry, seniors Joey Moza and Kyle Avery and juniors Brett Bollaert and Emily Kaatz. They’ve all been part of the big push over the last three years to make the section more than the informal group of upperclassmen that comprised the earlier versions, along the way earning their move into the front row of the bleachers.

Theirs is an enviable position and now comes with a succession plan, as seniors “will” leadership of the section to those expected to follow. But it’s more than that. This year’s leaders continue also-enviable strong relationships with principal Paul Flynn and athletic director Maureen Klocke that go a long way toward ensuring the section will have its current freedom in the future.

“We don’t want to do anything that the administration doesn’t like, because everybody in the school likes doing it,” Kaatz said.

“We’re trying to represent Yale. We don’t want to mess up the opportunities (for the future),” Moza added.

And that means sticking to what has become the identity of a section loved at home and much less so by opponents.

“This has been a few years in the making; we’ve got a great student body at Yale that really supports each other,” Kohler told the Port Huron Times Herald last week. “And our basketball kids kind of thrive off of that.”

For starters, Kohler’s Kids are as loud as ever. As described during the 2015 visit, opposing players often can’t hear the direction of their coaches. Yale’s players and coaches have developed hand signals as well.

The “Kids” are many in number especially for the boys games, spelling out what’s written on the back of their student section shirts: “You get them, you get us.”

And the quest to show sportsmanship, detailed on a banner hanging in the gym, is more than just a line from the administration. Yale students, Avery said, would rather try to affect a game by being loud, but positive, and have more fun doing the “chop” and “dab” than attacking opponents or getting into student section wars with some that try to provoke them.

Moza called it the “attitude of Yale” and all about respect. “Sportsmanship has always been our thing. And we hate when other teams are nasty,” Avery added. “They still don’t get into the players’ heads like we do, and we never say a negative thing.”

Avery and the rest would be crushed if the section, and that attitude, faded after they’re gone. Instead, they anticipate the section will continue to grow.

Despite the large numbers, leaders guess that only 50-60 percent of the student body is involved. But they also have seen signs that more students are interested in taking part – and that the section, this year reloaded, will have an easy time continuing to do so in the future.

“There are so many kids in our grade who are already so hyped about it and already into it. I don’t think we’ll have any problem getting a big group of people,” Kaatz said.

“Because it’s something that everybody works on,” Moza said. “It just keeps getting bigger. It’s going to keep going.”

PHOTOS: (Top) Yale's "Kohler's Kids" cheer for their classmates as the Bulldogs defend against Armada on Friday. (Middle) Roughly 400 students cheered together during this season's Battle of the Fans visit. (Photos by Lisa DePelsMaeker.)