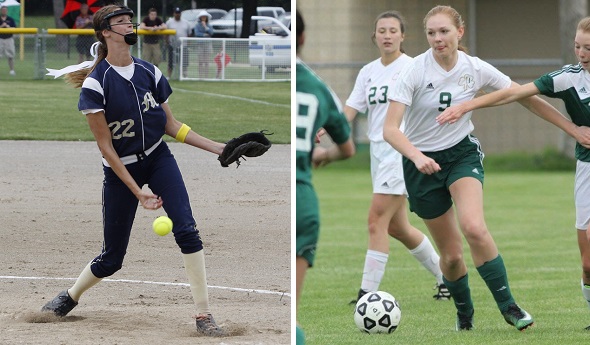 Mattawan’s Allie Havers experienced high school sports in part as a stepping stone to a scholarship and eventual national championship at the University of Nebraska.

Hackett Catholic Prep’s Hope Baldwin earned two national awards and several scholarships for an essay on the role of high school sports in shaping her future.

But for both Kalamazoo-area athletes, high school sports had a much deeper impact than just national recognition.

Baldwin, who is not playing varsity sports as a freshman at University of Notre Dame, was an MHSAA Scholar-Athlete Award winner, received the National Interscholastic Athletic Administrators Association National Scholar Athlete of the Year award in Phoenix in December and will travel to Atlanta in April for the Coach Wooden Citizenship Trophy.

She wrote the essay while a senior at Hackett and, looking back, she said, “When I wrote that essay, I think it was probably March of my senior year. Now, being in college and not being involved in those athletics any more has given me the opportunity to appreciate them even more.

“Reading my speech and being able to look back on how I was writing from that perspective still in high school, I was like, ‘Oh my gosh.’ I knew it was important then, but now not having it any more I realize even more what a benefit high school sports are.”

The lasting impression for both athletes is not a specific game or highlight, but “mostly I miss my teammates and coaches,” Baldwin said.

“In each season, coming in every day to practice with the same people really made unique bonds because we were all working toward the same goals.”

Havers, who was first-team all-state in three sports at Mattawan, said looking back, it’s the people who made the deepest impression.

“I remember the people, the coaches, my teammates and the seniors who were on the team my senior year,” she said. “I look back, and it was a pretty cool experience. I’m really humbled.

“I didn’t do it by myself. I had help from my parents, siblings, coaches and teammates.”

Baldwin was stunned when her essay won for the state of Michigan and then for her NIAAA section (Michigan, Wisconsin, Iowa, Illinois, Indiana).

She then was chosen as the female national award winner, earning a $2,500 scholarship in addition to a plaque.

Among points she emphasized were the following:

She added that although most enjoy the thrill of competition, “the true value of athletics lies in the transformation off the court. That is, in the time management, leadership, work ethic and teamwork skills that are carried in one’s character beyond sports and beyond high school.”

Baldwin, who is majoring in neuroscience and behavior with a pre-med concentration, said she chose Notre Dame for academics rather than attending a smaller school where she might have played sports.

While she played four years of volleyball, basketball and soccer at Hackett, that drive for competition has not completely left her.

“I’ve been doing some intramural sports, which is really fun,” she said. “Sand volleyball, basketball and our dorm had a flag football team. We actually ended up making it to the championship and we got to play in the Notre Dame football stadium, so that was really cool.”

Havers had no doubt she would be playing college sports after an outstanding career in basketball, volleyball and softball at Mattawan, graduating in 2013.

She earned a basketball scholarship to University of Michigan but when the coach left, she de-committed and eventually ended up with the Cornhuskers. 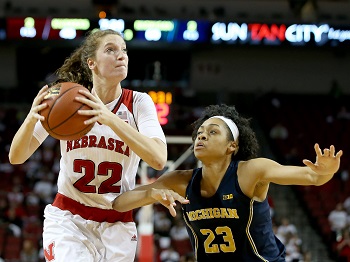 The transition from high school to college hoops was an eye-opener.

Her practice schedule was also different.

In high school, the team practiced about two hours a day.

But in college, “We practice four hours and on the court just about every day,” Havers said. “You have school work, lifting, meetings, tutors. You will definitely come out with great organization skills.”

After playing four years of basketball at Nebraska and graduating with a degree in psychology, Havers knew she did not want to give up competition in a college atmosphere.

“I had a fifth year of eligibility left but not in basketball, so I went out for the volleyball team,” said Havers, who is working toward a master’s degree in journalism and mass communications. “I knew if I didn’t try, I would regret it. Nebraska is a volleyball dynasty.”

She was faced with a situation unfamiliar to her.

“I played every basketball game, but I played just two volleyball games,” she said. “It was a lot different. I was used to playing a lot in basketball and all through high school, too.”

“No athlete likes sitting the bench, but you learn your role and you go with it. I feel really blessed for the opportunity and knew I had to work hard for a spot.”

The payoff was the NCAA National Championship when Nebraska defeated Florida in the four-set final Dec. 16.

Even though her college eligibility is gone, Havers, who hopes coach once she graduates, is still playing sports at the intramural level.

“Beach volleyball is a college sport at Nebraska,” she said. “It’s a three-month season with an indoor court.”

Havers' advice for high school athletes is: “Go in with an open mind, go in with heart and leave nothing on the table. Go to practice earlier and stay later.

“Coaches promise you anything, but that’s not always the way it goes. You have to go with the flow.”

ESSAY: See the full text of Baldwin’s essay below that contributed to her selection as an NIAAA Scholar Athlete winner for 2017. 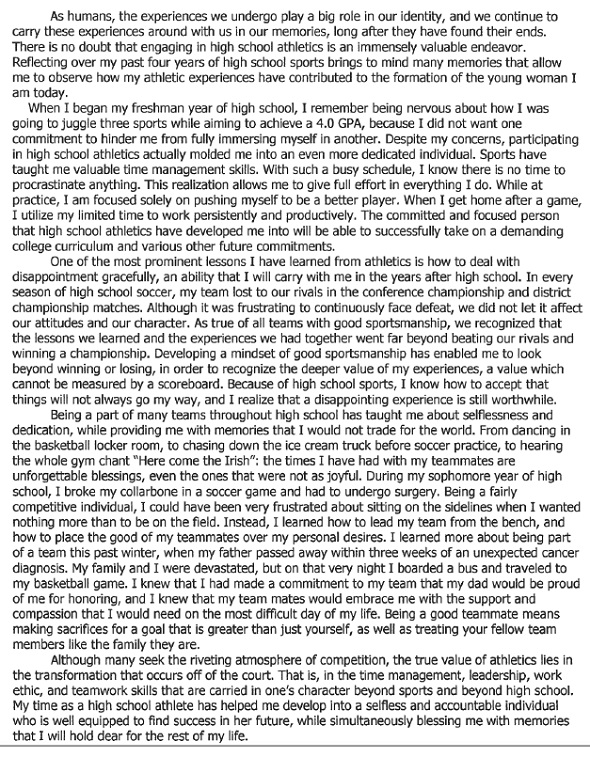