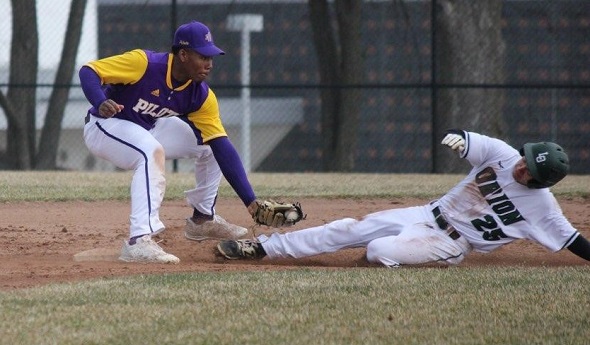 WARREN – Baseball, at its core, is a simple game. Throw a baseball, try to hit it and then catch it.

And that was more than enough to hook Bryce Bush.

“Baseball was first,” Bush said when asked which sport initially grabbed his attention. “My dad got me started. I was 3 years old. We’d always hit, play catch. Everyday. I just liked it.”

Bush has been all in ever since. One of four underclassmen selected to the 2017 all-state Dream Team by the Michigan High School Baseball Coaches Association, Bush is a 6-foot, 205-pound infielder at Warren DeLaSalle. He started at first and third base his sophomore season and played those two positions plus outfield last year before moving to shortstop this spring.

“I’m the best athlete on the team,” he said. “I’m used to it. It used to be my primary position. At shortstop, you’re in control of the whole infield. (Playing) third base was harder. You have to come in on balls, and that throw (down the line) is one of the hardest to make.”

For some, the transition would be a difficult challenge. But Bush, 18, isn’t your typical high school player. He has all the tools. He can run, hit for power and field his position. Pencil him in anywhere, and he’ll succeed.

Bush said he’ll likely play third base or right field at the next level. Just where at the next level has yet to be determined. He signed with Mississippi State University, and it’s likely he’ll be selected in the Major League Amateur Draft in June.

Where he’s headed next will be decided at a later date, and Bush said he doesn’t think about it that much. He said there were 10 major league scouts at his last game.

“I have no clue at all," he said of which round he'll be selected. “(The scouts) try to make it as hard as possible trying to figure it out. It’s really no big deal. I have a good backup plan.”

Until then, Bush’s focus is on this season and what he can do to make himself a better player while helping his team any way he can. Last season the Pilots reached a Regional Semifinal before losing to Sterling Heights Stevenson, 5-4. In 2016, DeLaSalle won the school’s fourth baseball Finals championship as the Pilots defeated Saline, 7-6, in the Division 1 championship game.

Bush and the other 15 returning players from last season have a new coach. Dave Zelmanski, a 1974 DeLaSalle grad, was hired after Matt Cook left the program to take over at Grandville.

Zelmanski had never met Bush before last fall. The new coach was a pretty good player in his day, having played four seasons at Wayne State University – but he said Bush is special. Zelmanski compares his introduction to Bush to when he was invited to a Detroit Red Wings practice about 15 years ago before he became a sales representative.

“I was working at Chrysler at the time,” Zelmanski said. “And I’m meeting guys like (Joey) Kocur, (Brendan) Shanahan and others. Then I saw (Steve) Yzerman. He was it. Just the way he carried himself. When I went to meet the (DeLaSalle) team, I saw Bryce, and he was it. 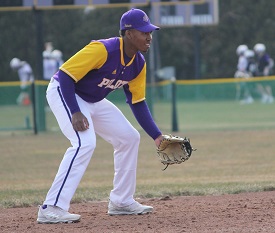 “I was talking with Jake Badalamenti, he’s one of our better players and he was part of the state championship team for football. He was in the (batting) cage, and I asked him where Bryce was. Jake takes me aside and he put his hands at his chest and said, ‘Coach we’re all here, the rest of us.’ Then he raised his hands over his head and said, ‘That’s where Bryce is.’

“(Bryce) is as quiet as a church mouse. He’s the nicest kid. And there isn’t anything he does that the other guys can do.”

Bush has what some call “God-given” talent. And it’s easy to see why.

His father, Elwood Bush III, grew up on Detroit’s west side and played baseball at Detroit Cooley. He went on to play at Hinds Community College in Mississippi and on the National JUCO championship team in 1989. Bush’s uncle, Ricky Bush, played at Jackson State, and his grandfather also played baseball.

Bush also has a brother, Ryan, 25, who chose basketball and was a good player at Berkley High.

Bryce Bush played basketball too but stopped after his freshman year to concentrate on the diamond.

In addition to his natural abilities, Bush is determined to out-work the competition. He works at his trade six days a week, taking Sundays off. He’ll run a half mile or so to begin his workouts before going into light stretching and then a more strenuous stretching exercise called dynamic warm-up. Many of these stretching exercises focus on his legs and arms.

He’ll then work on his footwork and field ground balls for 20 minutes or so.

He ends his training hitting with his teammates or, if he’s alone, in a batting cage. He’ll use a 35-ounce bat at the start to get loose, then go to his favorite wooden bat. Hitting alone takes an hour.

“I remember when I was 3, maybe 4 years old,” Bush said. “And I’d use a toy golf club and just start swinging it. I hit a wall with it sometimes.

“Honestly, I like everything about baseball. The best feeling is, of course, hitting a home run.”

Last season Bush hit 16 home runs to go with a .541 batting average. Through five games this season, he’s hit just one home run – but it was a memorable one against Birmingham Brother Rice.

“The wind was blowing in hard,” Zelmanski said. “Nobody was going to hit one out that day, and (Bush) just crushed one. I mean, it’s hard to say how far it went over the fence, but it had to go 20 or 30 feet beyond. Nobody could believe he hit it that far.”

PHOTOS: (Top) Warren DeLaSalle’s Bryce Bush applies a tag against Lake Orion. (Middle) Bush, after playing a variety of positions over the last two seasons, will line up primarily at shortstop this spring. (Photos courtesy of the Warren DeLaSalle baseball program.)