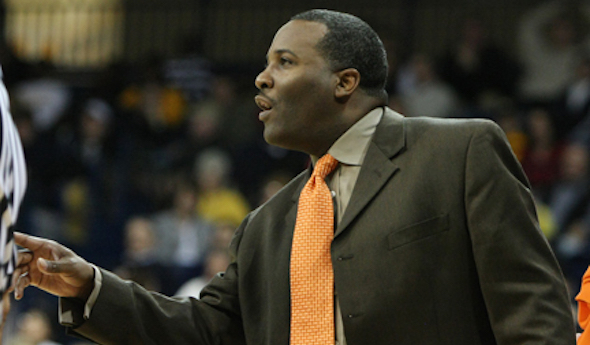 North Farmington boys basketball coach Todd Negoshian is not so vain to believe he’s at the top of his profession.

After all, he’s nearing just his fifth season running what is considered one of the top programs in the Oakland Activities Association.

What Negoshian is certain of is that he is a better coach now than he was during the early 2000s when he entered the profession as an assistant at North Farmington under his father, Tom Negoshian.

In addition to Todd Negoshian’s years as a high school coach, he spent three seasons (2004-07) as an assistant coach at Oakland University under coach Greg Kampe. Having worked at the college level has not only added to his knowledge as a coach but also given him an opportunity to work with different people under different circumstances but with similar goals.

“It’s his approach to coaching. There’s so many things you learned outside of coaching.”

This brief stint at the collegiate level gave Negoshian, 35, a whole new perspective on how to coach and how to be a coach. Building relationships takes time, and to those committed to being a coach who cares about his or her players, it’s paramount to allow for that time.

Some coaches, like John Beilein at University of Michigan, start out coaching at the high school level, move on to college and remain there. A number of others statewide have taken paths similar to that of Negoshian.

LaMonta Stone at River Rouge and Steve Hall at Detroit Cass Tech started coaching at the high school level and have recently returned to their roots after each spent several years as a college coach.

Stone played for the legendary Lofton Greene at River Rouge and then coached the Panthers to a Class B title in 1999. Stone ambitiously sought a position at the next level and was quite successful. He spent two seasons at Eastern Michigan, two at Ohio State and 10 at Bowling Green before returning to River Rouge last season as head coach.

And he has no regrets.

“At that point, I had goals,” Stone said of making the jump to college. “There were things I wanted to do. I still have goals. People ask me, would I go back to college? I don’t know. If the situation was right, I might.”

Stone, 49, returned for two reasons: family and community. Last season he was able to coach his oldest son, LaMonta, Jr., his senior year. Stone also has two other sons, ages 6 and 9.

Basketball is king in River Rouge. Greene won a record 12 MHSAA titles and the program has won two more since his departure. But the Panthers relinquished their claim as a state power soon after Stone left and haven’t been much of a factor in the tournament since. Stone intends on changing that.

“It’s a situation where, I’d been (coaching in college) for 14 years,” he said. “I’d reached all my goals. The only one I didn’t was to become a head coach. But you’re an assistant in the Big Ten. You can’t get much higher than that.

“The opportunity to come back to that community, I just couldn’t pass up. I get to be more of a part of my sons’ lives.”

In addition to the high school season, Stone said he enjoys coaching during the summer, in camps and individually.

“I can, within the (Michigan High School Athletic Association) rules, work with kids outside of Rouge,” he said. “I get calls all the time saying can you work with my son. I work with them but they can’t come to Rouge. I like it that way. There’s no pressure on me or them.”

Hall, 45, was one of the state’s top players when he graduated from Cass Tech in 1988. He played four years in college (Washington, Virginia Tech) before playing professionally overseas. In 1996 he became the head coach at Detroit Rogers, an all-boys school in the Detroit Public School League. Hall spent nine seasons there and won three MHSAA titles before the school closed.

Like Stone, Hall was looking for a more stable lifestyle. Family came first, and the opportunity to coach his alma mater was too good to pass up.

“A lot had to do with my life at this stage,” he said. “I have two young boys (ages 7 and 4) and to be more a part of their lives is important. If I wanted to spend time with them, we’d go to a game where I was recruiting a kid and that would be our time together on that given day.

“And I have a passion for this school. This whole year has been learning on the fly. At Rogers there was a lack of numbers. Here football is huge. We didn’t have a football team at Rogers. And here I have a surplus of numbers. It’s a different dynamic. Rogers was the smallest school in the PSL by enrollment. Cass is the biggest.”

Hall said he doesn’t miss the hours of travelling on the road, going into countless gymnasiums recruiting players and trying to convince them and their coaches that his university was the right one. It’s not that his responsibilities as athletic director and coach are less demanding. But being able to go home every night and see his children and sleep in his bed has its rewards.

Hall said he had more than a few conversations with Stone on returning home.

All three coaches agree that experience has its benefits. It’s not that coaching is any easier at this time. The challenges are still there and in many ways demand different approaches.

“Every stop makes you better,” Negoshian said. “Anytime you coach kids, the more you are around them, it helps.

“The game has changed. Society changed. Kids don’t want to fight through tough times. That’s why you see so many transfers. Everybody wants to be the hero. They want the focus on them. And it’s just not them. It’s the family. I’m not sure all of the parents are committed. They don’t want to go to A, B and C to get to D.”

Hall said the expectations for incoming freshmen and their parents are so different than it was when he was in high school. Then students went to a certain school, whether it was a power like Detroit Southwestern or a neighborhood school like Detroit Mumford, to be a part of an established program.

“It’s a trickle down from college,” Hall said. “It’s not, ‘I want to send my kid to a great program.’ There’s the attitude that if my son isn’t a part of it as a freshman, I’ll go somewhere else instead of being part of the process.”