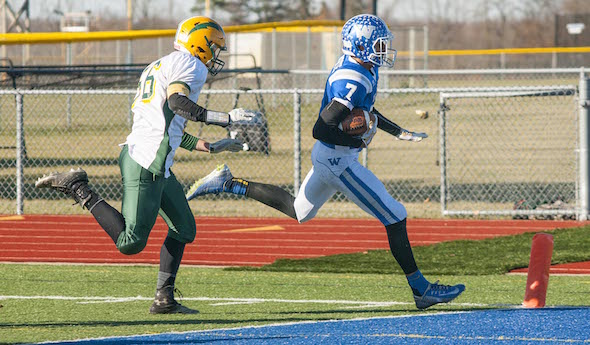 WALLED LAKE – Seeking a higher level of performance, many high school athletes have channeled their energy to one sport.

Many refer to this concentration as specialization – and Cody White, for one, isn’t buying it.

White, a junior at Walled Lake Western, is a three-sport athlete and he loves every minute of it. He plays basketball during the winter, baseball in the spring and football in the fall. During the summer he competes in AAU basketball, travel baseball, 7-on-7 football games with his Western teammates, and he participates in a few summer football camps.

White has played these same sports all throughout high school. His freshman year he competed in track and field, along with baseball. White hasn’t ruled out returning to track and field, in addition to baseball, as a senior – but this season he’s sticking with just baseball.

It’s a hectic schedule but, again, White wouldn’t have it any other way.

“I couldn’t see myself not competing in those sports,” he said. “I love them so much. I want to finish my senior year playing all three.”

White estimates that he’ll have two days off, away from sports, in June. In July he’ll take a week off, between his summer baseball team schedule ending and the start of football practice.

There’s no question White is driven, but it’s more than that. In some high schools, and with some coaches, playing multiple sports can be a challenge. There are some coaches who would prefer the students to play one sport and only one sport.

According to Western football coach Mike Zdebski, that isn’t the case at his school.

“We encourage them to play more than one sport,” Zdebski said. “For one, we want them to get their money’s worth. We have a pay-to-play policy of $425. You play one sport and it costs $425. You play three sports and it costs the same. And, two, playing other sports helps them develop other skills. In basketball you create space. In baseball you chase fly balls, and that helps with depth perception. Besides you get to work with other coaches and other teams.

“We’re lifting weights during the summer. If a kid is playing summer baseball or AAU basketball, if they have time they can come by and lift weights. And what we always tell them, if you’re tired let us know. You can take a break.”

Zdebski – whose team finished 12-1 last fall – was quick to point out some excellent athletes in the past, like former Kansas City Royals outfielder/Oakland Raiders running back Bo Jackson, who were multiple-sport athletes. And, more recently, there’s Luke Glendenning of the Detroit Red Wings. Glendenning was an all-state running back at East Grand Rapids. 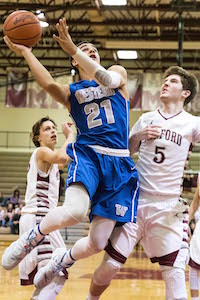 When his high school career is done, White will play football in college. Two months ago he committed to sign with Michigan State this winter. At 6-foot-3 and 200 pounds, White played receiver, defensive back and also returned kicks last fall. He played a big role in Western’s run to the Division 2 Semifinals.

During baseball season, White pitches and plays middle infield and right field. He plays the wing and shooting guard in basketball.

His interest in playing a variety of sports came at an early age and, as is the case with most children, a family member was the one who introduced White to athletics. Former NFL player and Detroit Lions executive Sheldon White is his father, but the first sport White played, at age 3, was baseball. Two years later he began playing football and basketball.

“Growing up was a little different (for me) than the usual kid,” Cody White said. “Going to Lions games and just being around football all the time. I think I love the game more because I was around it so much.

“But I think playing three sports helped me, too. The twisting of your hips in baseball, when you swing the bat, you’re using different muscles. And all the jumping you do in basketball. You have to move in tight spaces.

“With football, you’re with the football guys. By doing all three you meet different people.”

Playing multiple sports has definitely been the right road for White to follow. And his busy schedule hasn’t hindered his work in the classroom.

White has a 3.54 grade-point average pending his grades for this semester.

PHOTOS: (Top) Cody White (right) runs away from a Midland Dow defender during their Regional Final this fall. (Middle) White works for a shot against Milford. (Photos by Teresa Presty.)