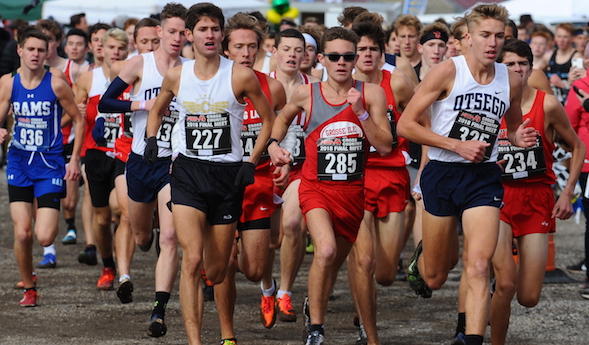 BROOKLYN — When Alex Comerford of Otsego decided it was go time, the race was over.

Nobody else in the MHSAA Lower Peninsula Division 2 Final field could muster a response to Comerford’s 4:49.11 second-mile surge, one which turned a close race at the mile into a 2.1-mile victory lap for the champion.

Comerford made all-state for the fourth time, but for the first time as the winner, when he crossed the line Saturday at Michigan International Speedway in 15:23.6.

“It’s awesome,” Comerford said. “I couldn’t ask for any better people to do it with. All of my teammates, we’ve come so far this year from where we started. We have so many young guys.”

Comerford is the only senior on an Otsego team that finished fifth. Two freshmen and a sophomore scored for the Bulldogs.

At the mile mark, Comerford and James Gedris of Grosse Ile came through together in 4:51, five seconds up on the chase pack. It was time for a gear shift.

“I don’t always have the last half mile the other guys do,” Comerford said. “I really had to make a hard move with two miles to go. I felt like I could sustain that pace for a long time. I’m happy with the way it turned out.”

Comerford won 12 out of 13 races this fall, finishing fourth in the Spartan Elite race on Sept. 14. He finished behind Division 1 champion Nick Foster of Ann Arbor Pioneer, Division 4 champion Corey Gorgas of Saugatuck and Gedris.

In his career, Comerford finished 13th, ninth, second and first at the Division 2 meet.

Bishop was thrilled with his finish after placing 61st in Division 1 last year and 22nd in Division 2 as a freshman.

“Going into the race, I was expecting maybe best-case scenario third place today, because Gedris is very good from Grosse Ile, and Alex obviously,” Bishop said. “Those two have always had a decent size gap on me. In the second mile, I saw Gedris coming back to me. Alex was out of the picture, at that point. Gedris was kind of coming back. I was like, “I can get him.’ I put in a little tempo there over the middle mile and used that momentum to the finish.”

A year after winning its first MHSAA Finals championship, Chelsea repeated with 121 points. Fremont was second with 134.