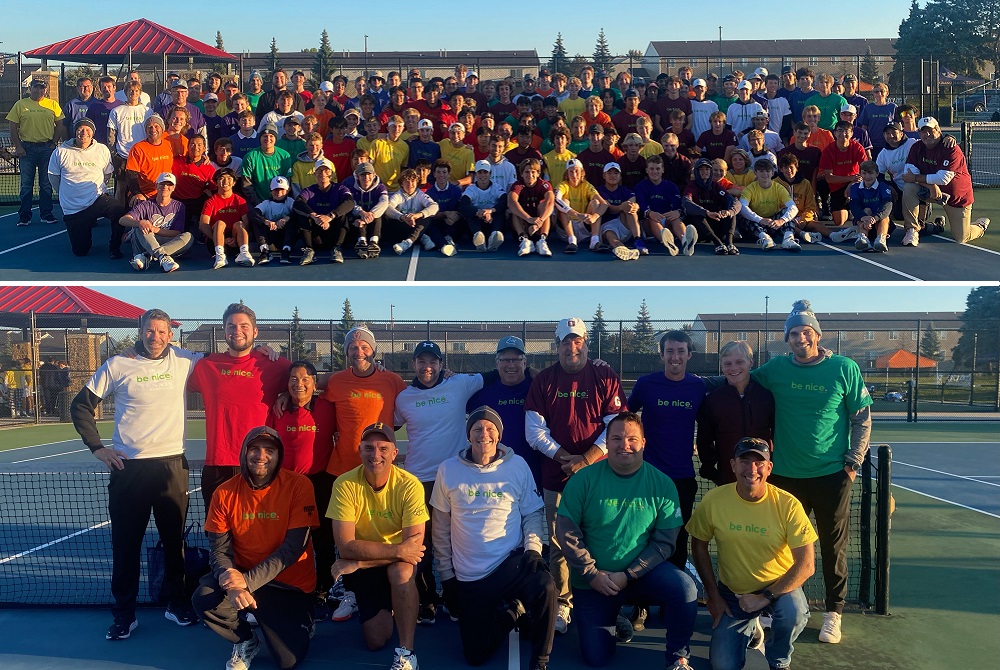 The Ottawa-Kent Conference Red boys tennis championship was decided Saturday, but all eight teams also teamed up for something bigger.

The Mental Health Foundation of West Michigan provides the be nice. program, with its mission to promote mental health awareness and prevent suicide through education with a four-step action plan (Notice, Invite, Challenge, Empower).  Additionally, be nice. provides mental health awareness training to all head coaches of MHSAA-sponsored sport teams.

“Over the past four years, coaches have received mental health and suicide prevention education by learning the be nice. action plan through annual rules meetings. Now these coaches are bringing it to their athletes and parents,” said Christy Buck, executive director of the Mental Health Foundation of West Michigan. “To see these coaches recognize the importance of having mental health discussions on their teams with their athletes gives me the chills. For the entire O-K Red, 140 coaches and athletes, to then take it a step further and bring awareness to their community is incredible. The information people received that day, without a doubt, started important conversations that will be life-changing for someone who was struggling, and that's what we're trying to do. The be nice. team program is simple, accessible, and it's going to save lives."

Leading up to the competition, every team had access to a be nice. team training that taught them to recognize the signs and symptoms of a mental illness and how to take action when they notice these changes. This program is a simple and effective way to empower coaches and athletes with a game plan for mental health concerns. Parents and spectators also were briefed on the be nice. action plan before the tournament began.

“Tennis is competitive and intense in the Red, but for the players and coaches, we see tennis as an extension of something bigger. It's about life, friendships, camaraderie, learning how to deal with adversity, learning how to lose, learning how to win, coming together as a family and creating collective goals,” said Rockford varsity tennis coach Tom Huizing. “Every day we try to live the be nice. way. Not only within our teams or within our conference, but within our lives outside of tennis.

“We've had many be nice. matches within the O-K Red, but now we wanted to set the standard as a conference and let everyone know that we are in this life together. We will notice, invite, challenge, and empower. All of us, not just one player or one coach or one team. Every player, every coach, every team. We want to walk the walk, not just talk the talk. So that's what we're doing on the biggest stage for our tennis conference. We are coming together at the O-K Red Conference finals and we are making a pact as an entire conference to be nice.”

Hudsonville and West Ottawa ended the season as co-champions of the O-K Red.

PHOTO The O-K Red brought together 140 athletes and coaches for its boys tennis championship tournament and also in an effort to bring awareness through the be nice. program. The entire group is pictured above, and the coaches below. (Photo courtesy of be nice.)