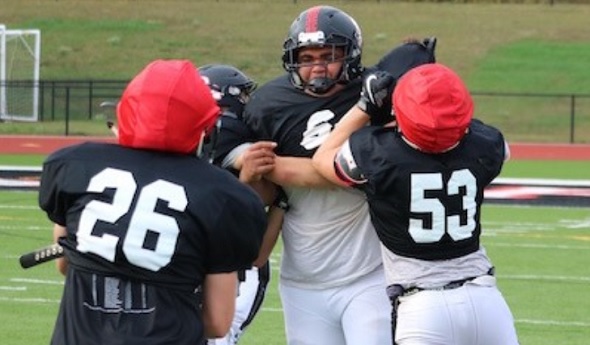 Midway through the 2016 season, Marcus Ford was frustrated.

He was on the Pinckney football team, but not playing much.

A big part of that was due to his size — 6-foot-5 and over 400 pounds — but then-defensive coordinator Rod Beaton sensed there was more.

“We feel that we coach very hard,” said Beaton, now Pinckney’s head coach. “We’re very aggressive (on the varsity), and sometimes it’s an adjustment for juniors to understand that when they come out here, there’s expectations.

“There were a couple times where Marcus was questioning … whether football was for him.”

And then came a change.

“It came to a point where he went home and took a day off to re-gather himself,” Beaton said. “Marcus came back and he said to me, ‘Coach, I really want to be a part of things here.’”

And Ford did more than that.

He grew from a young man who bristled when his coaches pointed out mistakes to one who doesn’t react as if it were a personal attack, from an overweight kid who admits he was on his way to weighing 600 pounds to a big kid who is a key part of Livingston County’s most successful football team as a senior.

He rarely comes out of games, his coach says, and the quiet giant who rarely interacted with his teammates has transformed into a happy, smiling kid who dishes out and takes teasing from them.

It’s a story of transformation that only football could have done for Marcus Ford, who couldn’t play youth football because of his size and whose options for high school athletics seemed limited to football for the same reason.

“I may sound a little clichéd and corny,” Beaton said, “but I think this is why every single coach in America coaches football, to watch the development of a young man, from freshman to sophomore to junior and to see what football has done for him.”

How did Ford do it?

He turned his mental approach 180 degrees and made drastic changes to his diet and work ethic.

One clue came in looking at Pinckney’s roster from 2016 compared to 2017. Last year, Ford was listed at 380, which was about 40 pounds less than his actual weight.

This year, he’s listed at 405, which is a dozen pounds more than what he weighs now.

This year, he is a starter on defense, regularly occupying two blockers at a time, which in turn frees linebackers Cauy Hendee and Levi Collins to make tackles.

“I can play a lot longer,” he said. “I was tired when we were out there, but we don’t believe in the word ‘tired.’ We prefer ‘winded.’ We just need to catch our breath. So I get ‘winded’ a lot less.”

The first thing Marcus decided to change was his diet, and he got his cues by looking in the mirror.

“I didn’t like the muffin cap that was hanging down,” he said. “I didn’t like my stomach hanging over. ... I thought, ‘I don’t what to have a heart attack at age 25.’ I was doing ‘diets,’ per se, but eventually I thought, ‘This is stupid. Cut out pop and eat better,’ And I did.

“The only thing I would eat that was green was green beans, and they had to be made a certain way,” he said. “Now, I’m more like ‘this is somewhat appetizing. Let me try that.’ I don’t eat candy bars anymore. I don’t eat ice cream when my family does. I drink a lot less milk than I used to, and I drink more water.” 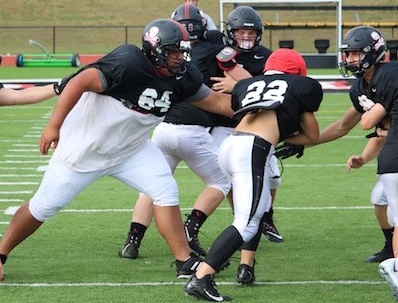 “His mom came to me about getting a weight plan, and he stuck with it,” Patton said. “They can only do so much in the weight room. When they leave, there’s not much you can control what they put into their bodies.”

But Ford also changed his mindset about football and being coached.

“His first real commitment was ninth-grade high school football, and it was a big adjustment for him,” Beaton said. “We knew there would be days where he might be a little confrontational, there may be some days where he goes through the motions.”

But after that midseason meeting last year, Ford redoubled his efforts in practice and in the offseason.

The first hint that he was a different player came in June, when Ford earned the team’s first bone helmet sticker of the season for effort in a drill.

“It was our first pursuit drill,” Beaton said. “We go four downs, and those kids have to sprint. There’s no exception. Marcus stepped to his gap, made his reads, flew to the football and didn’t say a word, every single time. He did it four times in a row. It really set the stage. I could tell he was wanting do to things right this year.

And so he has.

As a result, Marcus Ford is part of a Pinckney defense that has lifted the Pirates to an 8-1 regular-season record and shared Southeastern Conference White championship. He has transformed from a player who had little stamina to one who can go from opening kickoff to final horn.

“He can play a whole football game,” Beaton said. “He can go through a whole practice. One of the challenges we were talking about in the offseason is he has to put his body and mind in a position to not come off the field.”

That moment came on a warm night early in the season.

“We were in a huddle at Chelsea, and it was late,” Beaton recalled. “He’s drenched in sweat, and I said, ‘Marcus, you need a breather?’ And he said, ‘No, coach. I’m ready.’ That’s pretty cool.”

Asked his ideal weight, Ford said, “I would like to be at 250 if I could,” then laughs. His bone structure is such that at his height, he would be almost gaunt at 250. “I would settle for 340. That’s the dream within a dream goal.”

Next year, he plans to attend college.

“I want to go into bartending or being a head chef, or get a business degree,” he said. “One other choice is going to a police academy. As long as I can run a mile within 15 minutes, I should be good.”

There’s no reason, now, to think he couldn’t accomplish that.

He got his first sack against Dexter.

‘I grabbed him and rolled him over on top of me,” Marcus said. “I would have liked to have landed on him, but I got him down in the backfield. It’s good.”

And football now is fun.

“Marcus made a concerted effort to our strength and agility program,” Beaton said. “It wasn’t two days at a time, then not be there five or six days. Marcus was there. He would stay after everyone had left and get some extra lifts in or do some extra work to make sure he was putting himself in a (good) position.

“He said, ‘Coach, I want to be your starting nose (tackle).’ The first day of June camp, he ran out to the nose tackle, and we haven’t looked back.”

PHOTO: (Top) A pair of Pinckney blockers try to contain nose tackle Marcus Ford during a practice this season. (Middle) Ford breaks free to get an arm on a ball carrier. (Photos by Tim Robinson.)