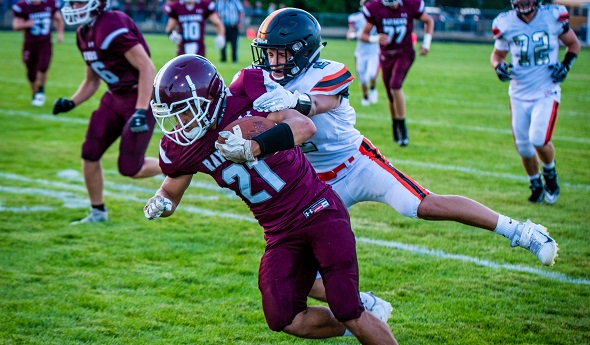 With 17 schools spread across 11 counties, the Northern Michigan Football League has created an indelible footprint since it was born into existence five years ago.

The conference, made up of three divisions of schools in varying size, has been able to sustain and evolve despite an ever-changing football landscape up north that has made for a revolving door of membership from year to year.

“It continues to morph,” said Frankfort athletic director Dave Jackson, the conference’s commissioner and one of the founders of the league.

“The scheduling aspect is where I go back to it,” said Johannesburg-Lewiston football coach and athletic director Joe Smokevitch. “It’s just been huge for us. Going into 2020 and 2021 my schedule is full, basically with teams from within the conference. They’re not all division games. I am crossing over and playing those other schools. It’s really helped with scheduling. Not having to go far away to play somebody. You look at our schedule. We play some quality opponents. I think the conference is very strong from top to bottom.”

The idea for the league was hatched in 2012 between schools in the Lake Michigan and Northwest conferences. Both leagues were seeing problems from smaller schools trying to compete with larger ones, and neither side benefitting from the affiliation. So, the two merged as a 13-team league comprised of two divisions of similar-sized enrollments.

The league has rarely stayed intact from year to year, switching to the three-division alignment with the growth to 20 teams in 2016 when it absorbed the remaining teams in the Ski Valley Conference, as well as withstanding the loss of six schools to 8-player football in the span of four years.

“We’ve taken schools in the league that didn’t last very long,” said Jackson. “We took in Newberry and they lasted just a year, then suddenly they’re 8-man. We took in Gaylord St. Mary. We took in Central Lake. Those teams were just a year or two and suddenly they’re gone. Our constitution calls for a two-year process of getting out, but those teams that had to go 8-man, they’re out for the next year. So, suddenly you’re scrambling again, which is the one thing we were trying to keep from having to do because there is no planning when that last-minute 8-man decision comes along and schools decide to make that plunge. There’s nothing you can really do when a school says they’re going to do that. You can’t say, ‘Well, the constitution says … .’ They’re going to do what they need to do.” 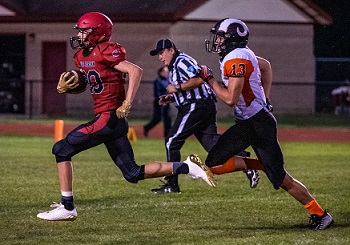 Fortunately for the league, it has been able to find suitable replacements at every turn. In fact, Ogemaw Heights and Sault Ste. Marie are set to join in 2020 to become part of the Legends division, bolstering the league to a robust 19 schools. Kalkaska and Boyne City will slide over to the Leaders division and Frankfort — one of the smallest 11-player football teams in the state — is moving to the Legacy division.

“It made sense to apply,” said Ogemaw Heights athletic director Jon Studley, noting four future conference foes already are on this year’s schedule. “We’re very excited about the opportunity to be a part of that. We’re going to be able to create some rivalries.

“I think fans of northern Michigan football benefit the most. They’re seeing competitive football week in and week out.”

As the NMFL has shown, the quality of football being played within the conference is at a high level, too. At least one team from the league has reached the Semifinal round of the MHSAA playoffs every season. Boyne City was a semifinalist in Division 6 in 2014, while St. Francis has represented the league in the Semifinals in 2015, 2017 and 2018. In 2016 two teams advanced that far — St. Ignace in Division 8 and Maple City Glen Lake in Division 6 — with Glen Lake reaching the Finals before falling to Jackson Lumen Christi 26-14.

There remains the possibility the league will undergo more changes before it more comfortably stabilizes. Some schools have expressed interest in joining, and the threat of losing members to 8-player football remains for a few of the smallest schools. It’s nothing the league hasn’t dealt with before, however. Jackson said it comes down to maintaining a commitment to the schools that are in the conference and carefully examining any growth that could occur.

“We had our big meeting in December, and one thing we talked about is how we have to look out for each other,” said Jackson. “We’re trying to guarantee that the league will provide eight of your nine games. In most cases the league is providing all nine of the games. So, you know you’re going to have somebody to play and you’re not going to have to go looking. There’s a time we may control 11-man football for everything north of Lansing. I don’t know. It continues to grow because teams are looking for that stability and consistency year in and year out, so they know who their games are with and they know who they play.”

PHOTOS: (Top) Charlevoix, carrying the ball, opened this season with a 40-26 win over Elk Rapids. (Middle) East Jordan got a step on Harbor Springs on this play last week, but the Rams emerged with a slim 34-33 win. (Photos by Sports in Motion.)