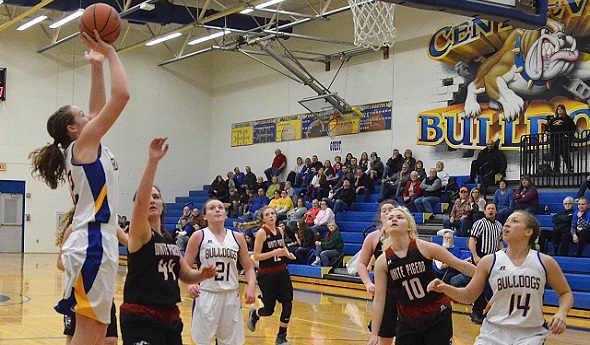 By Ryan Boldrey
Special for Second Half

When the Centreville girls hoops season got underway, head coach Jill Peterson gave her players a destination for which to shoot.

And no, it wasn’t the school’s first Regional appearance since 1998 – though after the team’s 14-1 start, that is beginning to look like a distinct possibility.

The destination was Deer Lodge, Montana.

Yet why would a girls basketball coach from southwest Michigan set her team’s collective sight on a place like Deer Lodge, Montana?

“At the beginning of the season we compared our season to a road trip,” Peterson explained, pointing out that Deer Lodge was a spot along I-90 that just seemed the right distance away. “Every day we talk about how far we’ve traveled. If it’s a real good practice (or game) we travel a good distance. If we don’t have a good practice, we talk about it and then set a goal for the next day, which may just be getting to the next city.”

To demonstrate how far the team has gone, Peterson hung a road map in the Bulldogs’ locker room. And while outsiders may not get to glimpse that map and see the marker making its way across South Dakota en route to Deer Lodge, they have witnessed Centreville sprint out to an undefeated start in Berrien-Cass-St. Joseph Conference play and rise to No. 4 in The Associated Press Class C poll – the first time the program has been ranked in recent memory.

“When my girls saw the tweet recently that we were ranked, they texted me and said, ‘What does this even mean?’” said Peterson, who played basketball for the Bulldogs from 2001-2004. “They had no concept. And like I told them, it may change the perception of what other people think of us, but we should still think the same thing we did yesterday.”

Despite the level of excitement that comes with being ranked, remaining grounded has not been an issue.

“I definitely think it caught a lot of us off guard,” sad senior point guard Skyler DeMeyer, who dishes out a team-high 6.5 assists per game. “We weren’t expecting it, but we are trying not to think about it because anything can happen on any given night and we need to keep ourselves to a higher standard. We realize that we can always get better, and every practice we push each other to do so. We know every other team we are going to see is getting better too.”

DeMeyer has been a motivating force both through her words and actions for her teammates, and prides herself on strong communication, tough-nosed defense and creating for her teammates on the offensive end. 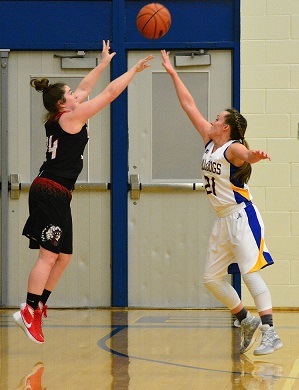 And while the offense may run through the scrappy senior, it’s the youthful power in the post on the receiving end of so many of DeMeyer’s passes that has helped propel the program to the top of the BCS Blue and give Bulldogs fans visions of Centreville’s first league title since the school last won a St. Joseph Valley title in 1989, as well as hopes for a bright future.

Freshman Joanna Larsen – who missed the team’s only loss in the season opener against Constantine – and sophomore Samara Schlabach provide a one-two punch down low, leading a balanced attack that sees no Centreville players averaging double figures in scoring this season.

Larsen was originally supposed to be on the junior varsity team this year but impressed Peterson so much during the preseason she was called up to the varsity.

“Joanna, as a freshman, is already so far up there with everything, it’s amazing,” said Schlabach, who leads the team scoring 9.5 points per game and surprised herself when she was named to the varsity club as a sophomore. “I’m really excited to see how far she’ll go, because she is crazy good. I’m really excited for the years to come to play with her.”

Schlabach hopes that they can build in the girls basketball program what the baseball program already has – expectations of success year-in and year-out, and she is excited to be a part of it.

Right now, though, the team is focused on getting from city to city. Destination Deer Lodge and a potential District tournament rematch with Constantine, something they don’t talk about – yet.

“We might get some flat tires along the way,” Peterson said. “But our goal is to just keep moving. If today is a flat tire, tomorrow is going to be a better day. We haven’t peaked yet, and we want to do that at the right time.”

Other players who have stepped up for the Bulldogs this year include Hannah Rice, Carly Todd, Brittany Morris, Carlee Odom and Kayla Gest, the latter of whom has dazzled with her outside shooting touch and lockdown defense.

PHOTOS: (Top) Centreville works to get the offense going during a 21-20 win over White Pigeon on Dec. 2. (Middle) The Bulldogs have held opponents to fewer than 25 points six times this season. (Photos courtesy of JoeInsider.com.)