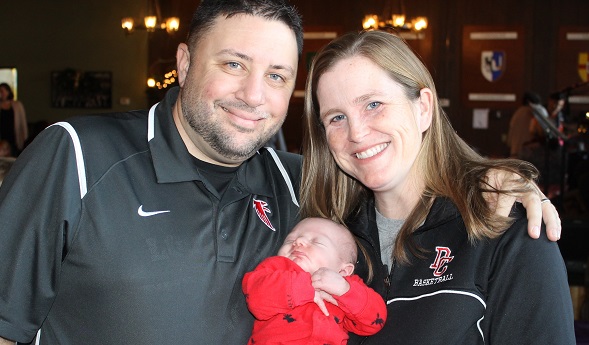 Kaniewski and head coach Mary Laney have been close friends most of their lives. They played basketball together at Divine Child, graduated the same year and played on two Class B championship teams (in 1993 and ’94). Kaniewski and Laney were putting a close on the season when Laney made a stunning announcement.

“We were working with the returning players,” Kaniewski said. “We were going over some stuff for the summer, and as we were ending things Mary said, ‘By the way, I’m pregnant.’ Being a math teacher, I put it all together. That put her due date near the start of the season. She said she’d be there for tryouts. I said, can you guarantee that?”

The birth of Owen Michael added a little excitement for the Laneys on Thanksgiving, and a bit of consternation for Kaniewski.

“Some things are just out of my control,” Mary Laney said. “It made for a nice Thanksgiving. It was the best Thanksgiving ever. Things will be better when (Owen Michael) gets his days straightened out from his nights.”

Things are already better for Kaniewski. Her best friend is back on the bench and coaching. In fact – and to the relief of Kaniewski – Laney was back coaching Dec. 2, two days before the Falcons’ opener at Chelsea. 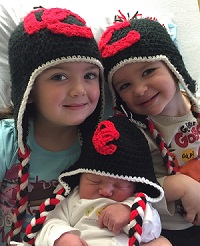 No question, it was stressful for both coaches. What helped alleviate some of the pressure is their friendship. There’s nothing Kaniewski wouldn’t do for Laney, and vice versa.

“I was a little nervous,” Kaniewski said. “I can joke with her. I told her you’ll be on epidural and I’ll be coaching.”

Their bond extends to their immediate families as well. Kaniewski has two children approximately the same age as Laney’s first two. Kaniewski’s oldest is Elizabeth, who will be 5 years old in May. Thomas will turn 3 in April. Elizabeth and Ellen Laney attend dance class together, and in late October the coaches came to pick up their children when Laney sounded an alarm.

“She said she was having contractions,” Kaniewski said. “I said, no, no, no. That can’t happen.”

It was a false alarm.

Laney did miss nine days with her team, including scrimmages. The preparation would have been a challenge even without the pregnancy. Divine Child was 20-6 last season but all five starters graduated. Add that two players suffered injuries, one a torn knee ligament, the other a concussion.

Formulating tryouts and making cuts tested Kaniewski’s resolve. Both Laney and Kaniewski had ideas on who their starters would be for some time, but things change. Players get better. Some don’t progress as quickly as others.

“That’s been the hard part,” Kaniewski said. “Then there was the parent meetings. I told Mary, no, no. I don’t want to do that alone.”

Laney, for the sake of both, moved the parent meeting up so they could tackle that together.

Then they received some outside help. Mary Lou Jansen, who coached those fine Divine Child teams during the early 1990s, offered her assistance. Kaniewski was grateful.

“She spent a few days with me,” Kaniewski said. “The kids were responsive. It’s just a different set of eyes.”

The lack of experience has forced the two to concentrate on the basics and not over-complicate things. Divine Child had opened 0-3 heading into Saturday night’s game against Saginaw Nouvel.

“Not many teams come back with no starters,” Laney said. “This group has been receptive. We’ve had five of six Division I players over the past several years. We don’t have that. We’re not worried about wins and losses. We want them to play hard and communicate.”