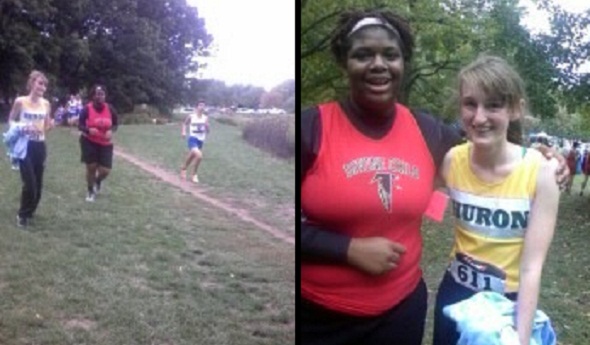 Give Mariah Fuqua credit for trying something many others would not.

Throwers – who toss the shot and discus during the spring track and field season – are not the ones who usually cross over into cross country during the fall.

It’s not that it can’t happen. It just doesn’t. Mention to most the idea of running 3.1 miles for fun, on top of a few hundred miles during training, and the response will probably be a laugh – if not a strange look.

“I was going to do it freshman year, and I talked my mom out of it so I could do basketball conditioning instead,” Fuqua said. “I thought (cross country) would be the hardest thing I’d ever have to do in my life.”

But Fuqua, a junior at Dearborn Divine Child, had a plan when she came out as a sophomore. She thought of it as another way to get in shape for hoops – and was so pleased with her improvement in fitness that she came out for cross country again this fall, although she is no longer playing basketball and never made it more than a mile and a half last season without stopping to walk.

Fuqua has continued to make strides this season, but heading into the Sept. 22 Detroit Catholic Central Invitational hadn’t strode over the finish line.

“The toughest part is convincing yourself,” Fuqua said. “It takes a lot to bring yourself to even think you’ll be running 3.1 miles, running non-stop.”

The DCC course at hilly Cass Benton Park is one of the toughest in the state, so that wasn’t going to be the day. She figured she’d run through a mile and a half and be done.

But as she neared one of those hills, she saw a runner from Ann Arbor Huron cheering her on from the top.

Alexandria Cell has been a distance runner since she was 9. The Ann Arbor Huron junior was an individual qualifier at last season’s MHSAA Cross Country Finals at Michigan International Speedway, and she finished a solid 67th of 238 runners with a time of 19 minutes, 21 seconds.

If running comes naturally to her, so does being a good teammate. And that’s why it made perfect sense that Cell – who finished runner-up in the long-finished varsity race – was still on the course cheering on her junior varsity teammates during the open run that finished off the meet.

Cell considers herself “definitely a hyper person.” But that’s not why Fuqua recognized her coming down the hill near the halfway point.

Instead, it was the color of Cell’s hooded sweatshirt after seeing her also cheering everyone on at the starting line.

Now, Cell was yelling directly to Fuqua, “Good job! You can do it! Keep going!”

Building toward a fantastic finish

Divine Child girls cross country coach Tony Mifsud and his staff emphasize running as a lifestyle. All are welcome. He and his assistants talk to new runners one-on-one to find out their goals for being part of the team – be they competition, fitness or social-focused.

Fuqua’s goal last season was to run one mile at a time. “We started with five minutes, 10 minutes … and she had a great attitude,” Mifsud said. “But this year, we had a different mindset: to finish. Our goal with her, number one, was to forget about time. Fifteen minutes or 55, whatever (to finish), we’ll get you there.”

Assistant coach Jack Benitez set up a plan specific to Fuqua, who embraced it. She continued to improve. On the tough DCC course, Fuqua was looking good to make it two miles on the fly.

“I’m so happy she made it to a mile and a half, and it’s a loop course, so you do it twice,” Mifsud said. “I’m saying, ‘Mariah, Mariah, run like the wind. Sing like the wind. Sing a song if you’re tired, in your mind. Say a poem, something that will change the focus on pain (to) on the finish line.’

“I can see it developing in my mind that this is going to be great, and of all places at probably one of the toughest courses in the state to run,” Mifsud added. “And lo and behold, we see this young lady out of nowhere running with her. And I’m thinking, this is even better.”

As Fuqua approached that hill at the 1½-mile mark, Cell ran down it and toward her.

At first, Cell ran around Fuqua a few times, willing her forward. Then she started running with her, and soon Fuqua mentioned she’d never finished a race.

Fuqua told Cell she wanted to stop at two miles. Cell convinced her she could keep going. So they did. They didn’t see a two-mile mark, but ran past two of Fuqua’s coaches, who told her she’d already run past it and might as well keep going.

That, in itself, was something Fuqua never thought she could do. Together, she and Cell moved through the final mile.

“When our team saw it, we thought, ‘That’s just Allie.’ With Allie, it doesn’t matter if you’re the slowest person or just started (running), she wants to cheer you on,” Huron coach Tim Williams said. “Her thought is everybody should be cheered on, no matter what.”

The boys open race had begun, and some of those runners had caught up with Fuqua and Cell. They too cheered on the pair as they passed them by.

“I told her thank you, and that I was going to give her a hug. Because when we were running up to the finish line, it was really emotional,” Fuqua said. “She said, ‘I’d really like a hug, but we can do it after.’”

“Here she comes up the hill at the finish line. And I don’t know what made people stay that late, but hundreds of them are at the finish line,” Mifsud said. “Maybe they sensed something. There was all this vibe, all this noise. And then it was Allie and Mariah, and it was just beautiful. They hugged each other and started crying, and we were crying. It was amazing.”

Give Alexandria Cell credit. She thinks what she did was nothing to fuss over. Anyone else would’ve done the same, given that opportunity.

She’s used to running lots of miles. She was already on the course. She needed a cool-down anyway.

“It was easy on my part. It was just fun to be able to support her,” Cell said. “Oh my gosh, she was amazing! I’m glad she got the support from her team and friends. It’s enough to drive people to do things they’ve never done before.”

And give Mariah Fuqua credit for finishing something many wouldn’t start.

Before, she convinced herself to keep running because when she was done, she wouldn’t have to run again for a few days.

Now, she tells herself to keep going so she can see how much she’s improved.

Her time that day in Northville was 49:37. She’s finished four more races since that afternoon.

And she’s going to run cross country again next season. She’s always loved the practices. The team is like another family. And now, the meets are more fun too.

“It’s really weird. I never thought I’d be in this situation to where I’d have to talk about it when people ask me or congratulate me, or people cheer for me when I’m running because they’ve heard about this race,” Fuqua said. “I didn’t think too much about it at the time. I had just finished the race and I was proud of myself for that. I didn’t think I’d be such a big inspiration at the time.

“Then my parents and coaches told me I’m doing something a lot of people can’t do, and I actually finished it. So that shows a lot of people, who will look up to you for this, it proves that throwers or someone with the same build can do this sport.”