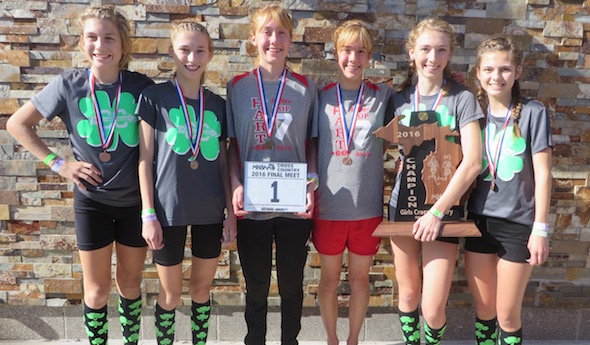 TRAVERSE CITY – Former college teammates Calvin Ackley and Rob McConnell used to joke that if their seven “little girls” ever took up cross country, and ran on the same team one day, that maybe, just maybe, they could win an MHSAA Finals championship.

The one team theory did not happen.

The championships? Well, that’s another story.

Meanwhile, Calvin and Amy Ackley’s daughter, Adelyn, will be seeking to defend her Division 3 individual championship. Top-ranked Hart, led by three Ackley sisters, will attempt to win the school’s first MHSAA team championship in any sport.

So, in the end, it wasn’t one school that benefitted. It was two.

Ackley and McConnell go back 25 years, They were the top two runners on the Cornerstone University cross country team in 1992-93. The two friends eventually went their separate ways, but then reconnected a few years later after they had married and started having children – girls, lots of girls.

The families started getting together a couple times a year.

“We like to visit during the summer,” said Bailley McConnell, a senior at Sacred Heart. “We’re all good friends. They’re like family.”

The girls like to be active when they’re together – going out for runs, playing on the sand dunes near Silver Lake, swimming, jumping around on a trampoline, and 4-wheeling.

“We’re pretty energetic when we’re together,” said Alayna Ackley, a senior at Hart. “We have a lot of fun.”

They’re having a lot of fun this fall, too.

And not just on the trails. The girls like to peruse athletic.net, a website filled with running results, to keep track of each other.

“We’re always looking to see how they’re doing and comparing it to how we’re doing,” said Bailley.

A little friendly competition of sorts.

“It’s like, ‘OK, the McConnells are doing this. We need to step it up,’” said Calvin.

Hart and Sacred Heart both have failed to finish first just once this season – in September’s all-division Spartan Elite race at Michigan State. Hart finished second, eight points behind Rockford, the state’s No. 1 team in Division 1. 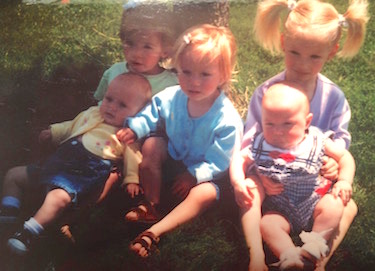 A year ago, all four McConnell sisters placed in the top 18 at the Finals. Alexis, who was third overall in Division 4, graduated and is now at Cornerstone (she was the Eagles’ No. 1 runner at their last NAIA meet). Cammie, who was fourth at MIS in 2016, broke her femur in August when she fell during a night run. The junior has missed the entire season.

“If they had Cammie, they could be as good as any team in the state,” said Calvin.

“It’s super exciting to be able to do what we’ve done,” said Bailley, who was second overall at last year’s Division 4 meet. “We have a motivated team.”

“We’re trying to stay humble and be confident in our abilities,” said Alayna. “We’re not letting (the No. 1 ranking) get to our heads.”

It’s been quite a ride for Rob McConnell and Calvin Ackley. They both got back into a more serious running mode when their children developed an interest in the sport.

“I didn’t want to send the girls out (on runs) by themselves, especially when they were younger, so I would follow in the car,” said Calvin, 46. “Then, I thought, I might as well get back in shape. In the last five years, I’ve enjoyed running more than I ever did when I was younger. When you get older, you enjoy a different perspective on it. And it’s been a great bonding experience with my daughters.”

Calvin Ackley said the couple “did not push” their daughters into running – they also have three younger sons – but they wanted a healthy lifestyle for their children. So they set an example.

“Our girls don’t train by running mega miles,” said Calvin, a teacher/coach at the middle school. “They run maybe 30 to 40 miles (a week). The key in running is consistency, training in those (winter) months that everyone likes to forget about. That makes a big difference.”

Rob McConnell runs anywhere from 70 to 100 miles a week. He and Tori, who ran at Alma College, enjoyed running in local races when their girls were young. The girls tagged along and soon wanted to be part of it.

“They wanted to do the fun runs, then the 5Ks,” said Rob. “Eventually they ran some half marathons.”

Rob and Tori like running long distances as well. In fact, they ran the Boston Marathon in 2013 – the year of the bombing.

“I was able to stay ahead of him in college,” said Calvin, “but I wouldn’t have a chance now. He’s a training machine. I don’t know how he keeps it up. His work ethic is second to none. He’s running phenomenal times.”

McConnell, who has his own construction company, runs with the Sacred Heart team during practice.

“On the weekends,” said Bailley, “Mom joins in.”

“That’s probably what got us, especially me, back into racing,” he said. “Relationship-wise, it was one of the best things we ever did – doing something with our daughters and having fun at the same time.” 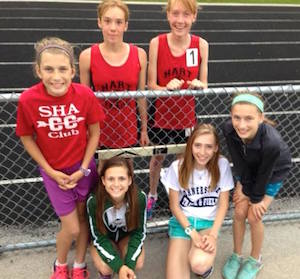 There was a stretch when the girls were running in middle school, Bailley admitted, that they went through a phase and grew tired of training.

But the girls, with a little coaxing, stuck with it and were rewarded.

“We realized where (training) got us,” said Bailley. “Whatever you put in, you get out.”

Sacred Heart has set the Division 4 championship meet record for the lowest score the last two years. In fact, last year’s score of 34 was the lowest since the MHSAA Finals went to divisions.

Hart has a shot at setting the Division 3 mark this season. No matter what the score, though, the Pirates would just like to end the drought.

“I want to see a green sign by the highway that says, ‘Welcome to Hart, home of the state champions,’” said Calvin, a Hart graduate. “That’s been my mantra for five years. I keep telling the middle school boys and girls that they can do this.”

The Hart boys are ranked No. 3 in the coaches poll.

“Our coach (Terry Tatro) has always said cross country would be the first sport to bring home a state title,” said Alayna. “I’ve always wanted to get that for him. I’ve been running for my coach for six years (since middle school). I want to make it happen for him, our school and for each other.”

Calvin Ackley has a vested interest in both the girls and boys teams. His nephews, Alex Enns and Andrew Whitney, were Hart’s top two finishers in Saturday’s boys Regional triumph, and Abram Enns (Alex’s brother) finished as the fourth counter on his team.

And, by the way, remember that joke a few years back about the seven girls running on the same team and winning a championship?

Well, that chapter is still not closed. Bailley is “leaning” toward joining her sister Alexis at Cornerstone next year. Alayna Ackley has Cornerstone on her short list.

Who knows what will happen?

“I joke now with Calvin that maybe we can get our daughters to go to Cornerstone and win an NAIA national championship,” said Rob. “That would be a great story in itself.”