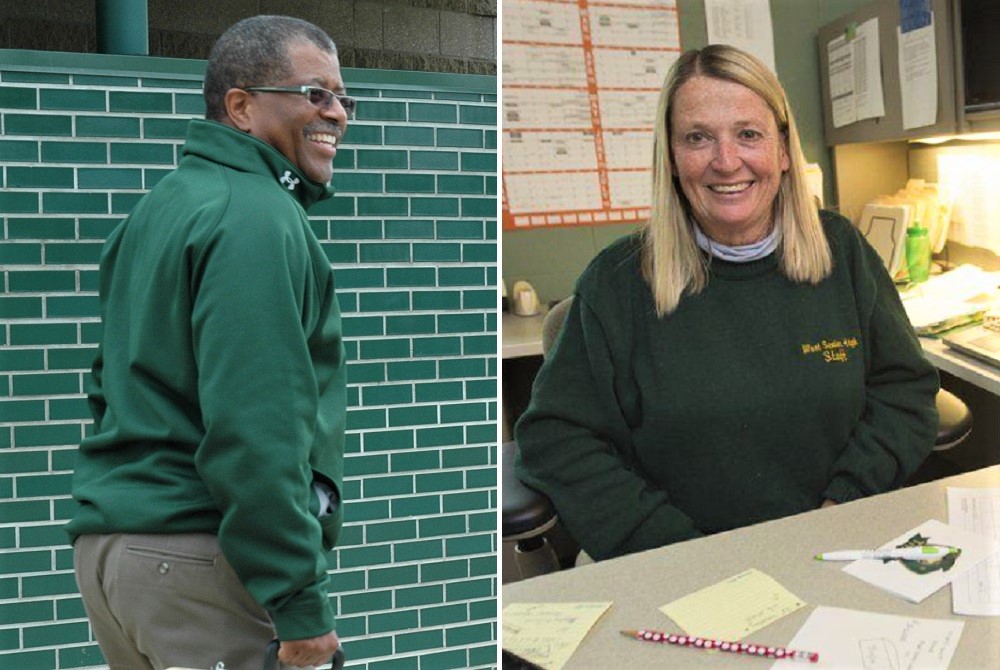 At one time during his four tenures as a Michigan high school athletic director, Leroy Hackley Jr. hosted MHSAA Finals in tennis and track & field and Districts in baseball, softball and soccer – all on the same day.

Another time, a neighboring athletic director hosting a Regional basketball game called because a dunk had just broken a backboard. An hour after Hackley took the call, the entire game had been moved to his school and play resumed.

Patti Tibaldi moved to Traverse City in 1995 already a high school and college basketball coaching legend and with district-wide administrative duties her next mission after also having served as a college assistant athletic director.

But with West High School set to open for the 1997-98 school year, and the most experienced applicant for the girls basketball varsity job having no more than seventh-grade experience, she stepped in again to build another program and make sure that generation of students received a great experience as well.

For nearly the entirety of their careers, and in multiple roles, Hackley and Tibaldi have been immersed in improving educational athletics. To celebrate their continued dedication and contributions over the years, they have been named honorees for the Michigan High School Athletic Association’s Charles E. Forsythe Award for 2021.

The annual award is in its 44th year and named after former MHSAA Executive Director Charles E. Forsythe, the Association's first full-time and longest-serving chief executive. Forsythe Award recipients are selected each year by the MHSAA Representative Council, based on an individual's outstanding contributions to the interscholastic athletics community.

Tibaldi spent 40 years in educational athletics at Comstock Park, Grand Rapids West Catholic and Traverse City West and also Aquinas College in Grand Rapids, serving as a coach, athletic director and physical education specialist. Hackley has spent the last 22 years of more than 40 in sports as an athletic director at Byron Center, Jenison, Grant and currently Muskegon Orchard View, as well as serving as an MHSAA-registered game official for 37 years. Both are recognized statewide among the best in their various fields.

“Patti Tibaldi has given more to athletics in our state at the small college and high school levels than perhaps anyone over the last 40 years,” MHSAA Executive Director Mark Uyl said. “She was a pioneer in small-school college basketball at Aquinas College, and my wife Marcy played against her there, and 30 years ago you could see that passion for women's sports that was unmatched. During her time at Traverse City West, her passion for kids was unchanged, and most of her students had no idea she had been that pioneer. She was a trailblazer for women in leadership positions in coaching and administration.

“Leroy and I were first-year athletic directors together in the same conference in 1999, and it's been a pleasure to watch him grow into one of the most respected voices over the last 22 years,” Uyl said. “At its core, athletics is a people business, and Leroy is all about those relationships. He's a guy who genuinely enjoys going to work every day.

Hackley has served as an athletic director first at Byron Center for five years, then Jenison for seven, Grant for three and Muskegon Orchard View for the last seven. Before those stops he served as director of health, recreation & wellness at Grand Valley State University for 14 years after serving as assistant director of recreation/intramurals for four years at Eastern Michigan University. His first administrative experience came while as a graduate assistant at the University of Iowa serving as supervisor of officials for the recreational services department. He’s also served as an adjunct professor in physical education at GVSU, Aquinas College and Muskegon Community College.

As well as hosting numerous postseason events, Hackley has served on eight MHSAA committees over the years and four years on its Representative Council. He’s been a registered MHSAA official in boys and girls basketball, softball, baseball, swimming & diving, volleyball, cross country and track & field over 37 years and has officiated every collegiate level of women’s basketball including Division I in the Mid-American Conference. He has officiated three MHSAA Basketball Finals and NCAA Division III and NAIA national championship games.

Just this week he changed his spring break plans to step in and host a Boys Basketball Quarterfinal and serve as a manager at MHSAA Semifinals on Wednesday and Thursday at Van Andel Arena in Grand Rapids.

“I’ve always wanted to step in because I know what it’s like when you need help. I’m one of those guys who doesn’t like to say no. I try to find a way to lend a hand wherever I can,” Hackley said. “I’ve always enjoyed sports; all my free times has been spent watching sports or playing sports, and I’ve been fortunate enough to have a wife who enjoys watching sports. Pretty much my whole live has been centered around recreation and athletics. Coming from a big family (as one of 13 children), that’s one of the things we always did.”

Tibaldi spent 40 years in education and athletics at the high school and college levels, beginning first at Comstock Park from 1973-75 before spending the next six years at Grand Rapids West Catholic where she led the girls basketball team to the Class B championship in 1979 and the softball team to four league titles.

Simultaneously for the final three years at West Catholic, Tibaldi also served as women’s basketball coach, then also softball coach at Aquinas College, where she also became assistant athletic director in 1981. While at Aquinas she led the Saints to a 340-136 record on the court and the National Catholic Basketball Championship in 1984.

Tibaldi then moved to Traverse City Area Public Schools, first as the district’s K-12 physical education coordinator but eventually in multiple physical education specialist roles. She also was named the first varsity girls basketball coach at the new Traverse City West High School from 1997-2011 and served as West’s athletic director from 2004 until retiring in December 2014. As coach, she led the Titans to multiple league and District championships and the final few hundred wins of more than 800 total on high school and college basketball courts.

She’s also played a prevalent role in helping make MHSAA policy over her decades. She’s served on a variety of MHSAA committees, including the Basketball Committee, and served in multiple roles with the Basketball Coaches Association of Michigan including as president. She also served at the collegiate level on the NAIA Executive Committee, the Wolverine-Hoosier Athletic Conference (WHAC) Executive Council and as part of NAIA Women in Sports Leadership program and the Michigan Women’s Foundation Tribute to Women Athletes Committee.

“To me, teaching life lessons is everything,” Tibaldi said. “I had great kids, and it makes me proud to see where they’re at – the things they’re doing are mind-boggling, and it makes me really proud. The thing they all tell me is they learned what hard work was, about teamwork and persistence, and resilience. That to me is what’s valuable.”

Tibaldi also co-authored and was granted a $1 million federal grant as part of the Every Step Counts program to provide the Traverse City community with funds to fight obesity, and wrote and coordinated a USDA-funded Michigan Fitness Foundation grant for promotion of healthy school environments in five high-needs schools. She’s been an active volunteer with the Boys and Girls Club and presented at the annual Girl-Tech Conference to encourage young women to choose non-traditional careers. She continues to do work with the Michigan Fitness Foundation.

Tibaldi is a graduate of the former Redford St. Mary’s High School in Detroit and earned her bachelor’s degrees in English and physical education from Aquinas in 1973. She was named Aquinas’ Outstanding Alumni of the Year in 1995 and is a member of that school’s Hall of Fame as well as Grand Rapids West Catholic’s  and the Grand Rapids Sports Hall of Fame.

Hackley is a graduate of Culpeper County High School, located southwest of Washington, D.C. He earned his bachelor’s degree in recreation administration from Bethany College in Kansas and his master’s in recreation education from Iowa. 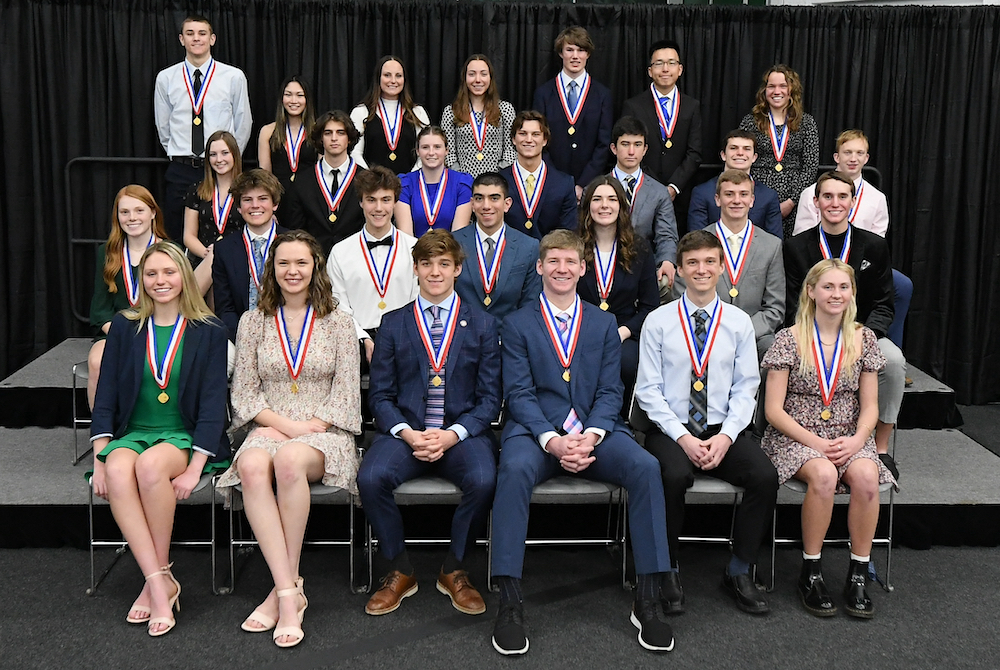 The 120 finalists for the Michigan High School Athletic Association's Scholar-Athlete Awards for the 2022-23 school year, presented by Farm Bureau Insurance, have been announced.

The program, in its 34th year, has recognized student-athletes since the 1989-90 school year and again this winter will honor 32 individuals from MHSAA member schools who participate in at least one sport in which the Association sponsors a postseason tournament.

Farm Bureau Insurance underwrites the Scholar-Athlete Awards and will present a $2,000 scholarship to each recipient. Since the beginning of the program, 896 scholarships have been awarded.

Of 421 schools which submitted applicants, 25 submitted the maximum allowed. This year, 1,440 applications were received. All applicants will be presented with certificates commemorating their achievement. Additional Scholar-Athlete information, including a complete list of scholarship nominees, can be found on the Scholar-Athlete page.

To be eligible for the award, students must have a cumulative grade-point average of 3.50 (on a 4.0 scale) and previously have won a varsity letter in at least one sport in which the MHSAA sponsors a postseason tournament. Students also were asked to respond to a series of short essay questions, submit two letters of recommendation and a 500-word essay on the importance of sportsmanship in educational athletics.

Farm Bureau Insurance of Michigan was founded in 1949 by Michigan farmers who wanted an insurance company that worked as hard as they did. Those values still guide the company today and are a big reason why it is known as Michigan’s Insurance Company, dedicated to protecting the farms, families, and businesses of this great state. Farm Bureau Insurance agents across Michigan provide a full range of insurance services—life, home, auto, farm, business, retirement, Lake Estate®, and more—protecting nearly 500,000 Michigan policyholders.

PHOTO A group including 27 of last season's 32 MHSAA-Farm Bureau Insurance Scholar-Athlete Award winners take a photo together during the banquet at Breslin Center.