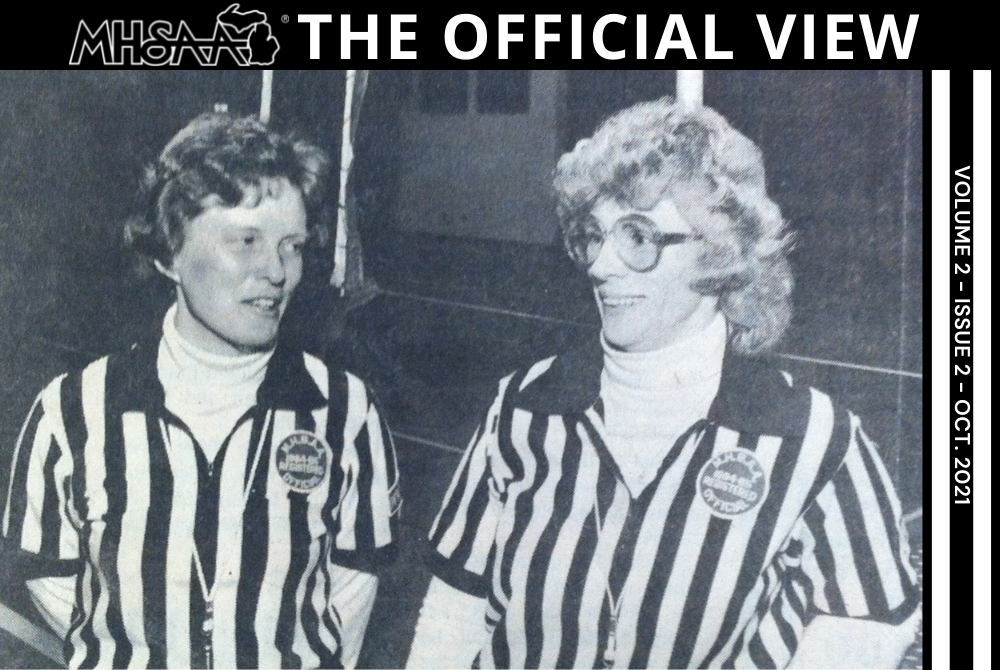 In the 50 years since Congress passed Title IX legislation in order to create equal educational opportunities, huge strides have been made for female students to participate in athletics.

But the advancement of opportunities wasn’t just for the athletes. It also opened a door which ushered in a generation of female sports officials.

Betty Near is one of those officials whose long and distinguished career as a high school and collegiate volleyball official is a direct result of the opportunities provided through Title IX. Unlike many today who entered officiating after having played the sport, Betty didn’t have those opportunities before first climbing the ladder (literally) in 1971. She was encouraged to take up the sport by Macia Tiesenga (a nationally-ranked collegiate official) who told Betty – who had been involved in athletics recreationally – that athletes make the best officials because of their understanding of competition.

“I’m frequently asked whether I got into officiating because I played volleyball. I tell them I didn’t play because girls volleyball didn’t exist when I was in school," Near said. "I try to share the story of Title IX every chance I get, to show them that they now have opportunities to both play and officiate because of those that came before them.”

Near has spent more than 45 years as a registered MHSAA official and is still going strong. That run has included six appearances as a Finals official. She recalls how at one of those Finals, an injury to her knee created a change in mechanics for the entire state.

“When I first began officiating in the 70s, the MHSAA had the umpires (R2s today) kneel underneath the net to look at blockers," she said. "This was quite dangerous and pretty ineffective.

"Officiating at the collegiate level, I had been trained to stand at the pole and look down the net. With this background, and seeing as my knee was still hurting from an earlier injury, I decided to use this mechanic.” 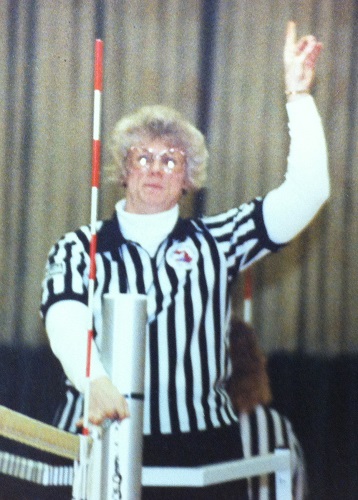 Sue Martin, the MHSAA director for volleyball at the time, approached Betty following her match. Near was certain that she was going to receive an earful. Instead, Martin asked the justification for using the mechanic, and they discussed the pros and cons of each. It was ultimately decided moving forward the umpire would take a position standing at the pole.

Mechanics changes aren’t the only effect Near has had on the sport. She was instrumental in the start of the West Michigan Volleyball Officials Association in 1984 and continues to help lead and grow that organization (now with more than 125 members). This has allowed her to work with the community, raising nearly $125,000 for scholarships for graduating high school seniors. And one of her biggest contributions remains her role in recruiting and mentoring new officials – especially helping to develop the next generation of female officials.

“Mentoring is a gratifying thing,” said Near, “especially when I receive emails or calls thanking me for helping them understand specific rules or situations and improving their skill sets. Watching someone I have mentored over 20 years work her way up to officiate multiple state tournaments (pleases me).”

Now officiating primarily at the college level, Betty still reserves Thursdays during the season to officiate MHSAA contests. She does this for the purpose of staying connected to high school students and officials and to build on the growth of female registered officials, though she also recognizes that challenges remain for female officials advancing through the system.

One of the natural barriers that apply to women more often than men is that women who begin families sometimes find difficulties continuing to officiate with their other responsibilities. While home lives can be difficult to navigate (for both women and men), officiating school sports provides a flexible alternative to stay active, remain involved in athletics, give back to the community, develop camaraderie and earn some extra cash.

Another hurdle that Near identifies for female officials, unfortunately, is a continuation of the “good ol' boy network.” She is reminded of a not-so-distant-past example when she and another female official had been selected to officiate the Regional round of the MHSAA Tournament; and even though both were well-established collegiate officials the host athletic director insisted that less-experienced male officials work as the R1 and R2 and the women work as line judges because the men would have better control of the tough matchup.

The door that was opened for women and girls with the passing of Title IX a half-century ago only provides the opportunity. Capitalizing still requires stepping through the door to take full advantage of the opportunities provided. Near wants to encourage anyone to join the avocation of officiating, but especially young women.

“My hook is that the officiating is fun, and it is an activity that can be an avocation that can pay (in many ways) throughout their lifetimes," she said.

Postseason Assignments: Officials assignments for fall sports tournaments have been released. Congratulations to all selected to officiate this year.

Speaking of tournament assignments, a change will be made this year that allows basketball officials to submit their availability to work together as a crew. Crews can be set for the boys and girls tournaments separately. The hope is that this will encourage more officials to seek postseason consideration, knowing they can choose with whom they will officiate. Eligible individuals not included with a crew will be assigned a crew by MHSAA staff.

For all winter sports officials, make sure to complete all requirements for postseason consideration. Please remember that officials in basketball, competitive cheer, gymnastics, ice hockey and wrestling must opt-in to the tournament by indicating their tournament availability dates HERE. All additional requirements such as completion of tournament exams and submission of regular-season schedule also remain in place.

Officials Review Committee: The Officials Review Committee, consisting of school administrators, officials and assigners from around the state, convened in early October to discuss issues and concerns involving officiating. A number of proposals were made to the MHSAA Representative Council. You can find these and other discussion items by reviewing the minutes HERE.

SOCCER A player (#7) is injured and must leave the field. His team elects to play short-handed. If #7 heals up, when can he return to the field? What if they wish to replace him with #12?

RULING If #7 comes back into the game, he only needs to wait until the next stoppage of play. If he will be replaced by #12 though, #12 can enter the game only at the next legal substitution opportunity.

REVIEW Last month’s play involved a suspect block by a defensive player (found here). The block by B17 is correctly flagged for an illegal block below the waist. While not widely known by spectators, blocks below the waist (except for linemen immediately at the snap) are illegal for players on both sides of the ball. In this case, since the block was by the defense, the penalty is enforced 15 yards from the end of the run.

VOLLEYBALL Officiating ball handling is the topic of this month’s "It’s Your Call." This rally ends following the pass of a back-row player. What’s the call?