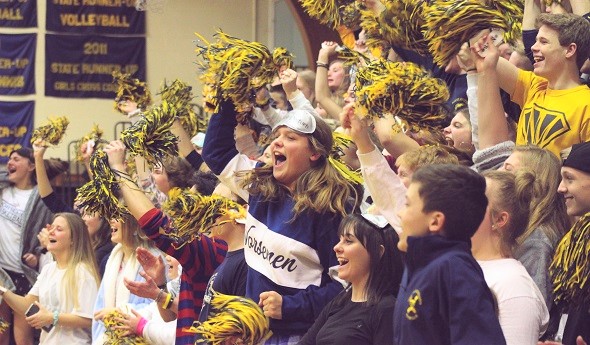 NORTH MUSKEGON – North Muskegon junior Caleb Rypstra readily remembers being an elementary schooler in 2012 and watching 2,000-point scorer Spencer Krannitz take on Whitehall in front of a gym jammed in part by a giant student section.

Senior Nicholas Rossiter didn’t like going to high school football games when he was young, in part because of the loud crowd – but living a few blocks from the Norsemen’s stadium, he couldn’t completely avoid hearing the Norse Nation boom.

That’s how North Muskegon students cheered on their classmates back then. That’s what they do now. The only difference? Norse Nation is more organized this winter – and showing the rest of Michigan what it’s about as one of three Battle of the Fans finalists.

“As a senior this year, we’ve really been pushing to make a difference as a class and do something no one else has done,” senior Kendal Hoppa said. “And I think we’ve really run with this theme of having such a huge and welcoming sense of community within our school.

“Between the K-12 grades and even then community coming out and supporting, we’ve really just harnessed that love and embraced it. Just made it super, super big this year and wanted to broadcast that. We have Norse pride, and we want the whole community to see.”

Seeing was believing Wednesday, as we visited North Muskegon for the second of three stops on this year’s Battle of the Fans VIII finalists tour. We met with seniors Rossiter, Hoppa and Brady Lindell and juniors Rypstra, Camryn Klint and Bella Lindsay to learn about the student section’s rich past, newly-organized present and to watch the Nation in action during the boys basketball team’s rematch with rival Montague.

We’re reporting on all three of our BOTF finalists visits this month following the format of a typical game night. We kick things off below with some of the Norse Nation’s “cheat codes” for other student sections hoping to grow and improve, followed by the video from our visit and then more of the “game story” from our trip.

Take some of these tips from the Norse Nation:

Take action. Getting something going can seem like a tall task, but someone has to start the conversation. Leaders lead. Don’t be afraid to be one.

Talk to your principal. That was the key in North Muskegon’s case, but it could be any administrator, teacher, coach, etc. Norse Nation leaders credit principal Ken Byard specifically not just for bringing a boost of school spirit when he was hired in 2016, but also for being always available and open to ideas. He's willing to help in any variety of ways, like working with the school board and sports boosters to get free fan buses for away games.

Start small: First find and develop a passionate core group that will lead the charge, and then spread the message through channels like social media, daily announcements and whatever else is available.

Start simple: A student section doesn’t have to do something completely out of the box to get people interested. Something as simple as getting everyone to wear school colors to a game can get things moving, bring people together and make them feel part of something.

A thin channel connects Lake Michigan to Muskegon Lake, a sizable bay with North Muskegon on its north shore, directly across the lake from the city proper. By car, the closest neighboring school to North Muskegon is Reeths-Puffer, a little less than six miles away, and the region as a whole is dotted by communities with their own substantial local pride. Many of the smaller communities make up the West Michigan Conference. Victories dating to the 1930s are among those celebrated in North Muskegon’s trophy case. The league was formed during the early 1930s, and the school opened in 1935.

That’s not to say Norse Nation is pushing a century of cheering. But there’s certainly tradition in a community where generations tend to return to raise their own families, and people know each other usually by more than name at a school with just under 330 high school students.

In fact, the high school students make up most of the first floor of the community’s Mills Avenue building, while middle school students attend most of their classes on the second floor (with some crossover between the two) and the elementary school wing connected on the northeast side of the property.

That proximity is a key part of Norse Nation’s history and continuing story. “For as long as I can remember, our school has had such a big turnout for all sports games and especially boys basketball right now because the team is pretty good recently,” Lindsay said. “But what makes us so special is that since we’re such a small school, K-12, we have the elementary, middle school and high school all involved in the games regularly. That’s just a normal thing for us.”

And that would’ve continued into this winter, to be sure, without any added incentive. But on a bus ride back from a cross country meet this fall, Lindsay and Rossiter had a conversation: Why not give Battle of the Fans a try?

That sparked changes to the organization of the section that should keep it rolling strong for years to come.

In past years, students informally rallied each other to come to games. Hoppa was one of them – in fact, she and Rossiter were mock-elected class “Norscots” to recognize their school spirit. So they were sure things when the “Student Section Council” held its first meeting at the start of this winter. Nearly five percent of the high school student body – at this small school 14 students, mostly seniors and juniors with a couple of sophomores – took the first steps that afternoon toward bringing organization to the already prevailing spirit at the school.

The newly-organized Norse Nation got rolling quickly. After that first meeting, Principal Byard allowed the SSC to hold an all-class assembly to explain BOTF and how it would be a great way to show the school’s sense of pride and family. They’ve since had multiple assemblies to teach cheers and get students pepped to come to games.

The 14 members of the SSC correspond on a group chat, and all interested classmates are invited to join. With Hoppa running Instagram and Snapchat accounts and Byard the school’s Facebook and Twitter feeds, the Nation got the word out on all of the fun it had planned.

An elementary school night allowed families to attend games for $1 if their children were wearing Norse gear. An upcoming throwback game was hatched, and basketball players will be wearing retro uniforms to join in. Impressively, the Nation completed its mandatory BOTF semifinals “takeover” of the MHSAA’s Instrgram at a ROAD game with a “gold out” that made that away gym seem a lot like home (see bus ride post below). 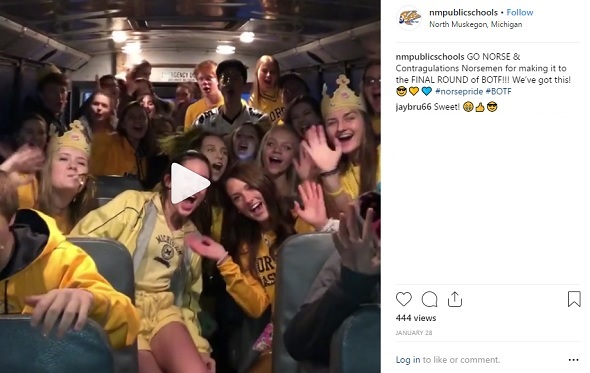 And that brought us to Wednesday’s “Slumber Party” for one of the boys basketball team’s biggest games of the regular season.

North Muskegon’s gym has an old-time, small-school flavor, and the packed-in nature made it difficult to estimate how many students filled a quarter of the stands for what obviously was a big game – Montague had handed the Norsemen their only loss this season Jan. 10.

Still, this was a Wednesday. And had been a snow day. And the Nation still turned out in force, even if it was tough to figure out how many of 150-170 students were high schoolers or the youngsters from the elementary – aside from the first few rows, all grades seemed to mix pretty easily all the way to the rafters.

“Everyone grows up with each other. I don’t know what it is. It’s just this place,” Rypstra said.

Pajamas were the gear for the day, but sleep was not an option. Although the Norscots led a lot of cheers, anyone could get things going – and the yelling started before the opening tip and lasted through the final seconds of the home team’s 58-44 win.

There were favorite chants and cheers for individual players, and all positive. A student on electric guitar provided a unique spin to the national anthem, and the pep drum line provided accompaniment throughout the night. Halftime got a little wild – a pillow fight in front of the student section, followed by limbo at halfcourt and finishing with a “Cha-Cha Slide” – but no one was injured and everyone had fun, and the team became the focus again as soon as the second half started.

More than cheering: “I’ve kinda always been that person that’s super open and super inviting and (the one to) be like, ‘Let’s do this cheer. Let’s be loud,’” Hoppa said. “(But) I was never really close with Nick until this started, and now we’re friends and within the same friend group almost. Being in the Student Section Council has been cool for my school, but it’s been super cool for me and my friends because I’m growing my friend group too." 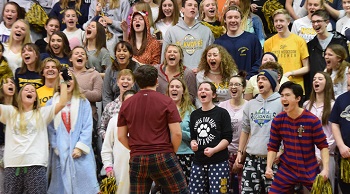 Set the positive tone: “I feel like what we do against the rivals is cheer louder. We get more into it,” Lindsay said. “We stay with our positive cheers, but we just fire back at them if they say something; whether it’s positive or negative, we fire back louder. Just say ‘Go Norse’ even louder.”

Best possible compliment: “I have a lot of friends in our conference, and they’re like, ‘Your student section is always so fun. I wish I could go to North Muskegon and just be a part of that.’ And I’m like, ‘You can come. You know the theme; just come and do it,’” Hoppa said. “I think that’s a positive answer. That’s something awesome, that you want to hear. Somebody that’s not a part of something that you are part of, wanting to be a part of it.”

Next stop on BOTF: We will visit Buchanan for its boys basketball game tonight, Feb. 15, against Niles Brandywine. Public voting for Battle of the Fans begins Tuesday on the MHSAA’s Facebook, Twitter and Instagram sites – come back to Second Half on Monday for our Buchanan report and Tuesday for instructions on how to vote.

PHOTOS: (Top) The Norse Nation cheers on the North Muskegon boys basketball team during its game Wednesday against Montague. (Middle) Junior Chris Rypstra, front, leads his classmates in a chant during a break on the floor. (Photos courtesy of North Muskegon High School yearbook staff.)