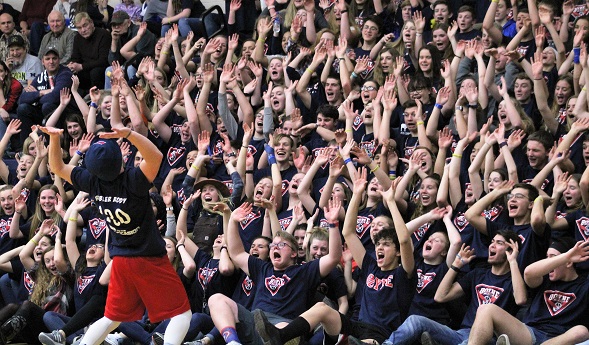 BOYNE CITY – What’s 8 feet tall, full of air and able to bounce on its head?

Just another reason to check out a Boyne City High School sporting event and one of our three finalists for the Battle of the Fans VII championship.

Of course, the Rambler Rowdies’ candidacy to be named Michigan’s top high school cheering student section has a lot more to do with the raucous atmosphere created by a few hundred students who regularly fill the stands to support the teams at one of the state’s smallest Class B schools.

But the introduction this year of Captain Rowdy – a giant inflatable mascot who shows up just about everywhere – is the latest proof of the festive culture that’s taken hold in Rambler country.

“It kinda starts with having enough people at a game to do something,” senior Ethan Hewitt said. “You either need to have a good team or a school that is really involved in making sure people are at the game in the first place to form a cheering section. Then it just takes a couple of kids to get the idea and run with it."

“You just need that spark,” classmate Jake Kelts added, “and once you have that spark, it starts a fire.”

We met with senior section leaders Hewitt, Kelts, Anna Harmeling and Lauren Fitzpatrick prior to the Feb. 2 boys basketball game against Kalkaska to discuss all that is new and “rowdy” with the Rambler Rowdies, one of two return finalists from last year’s BOTF VI.

As with last week’s report on our BOTF finalists tour stop to see Petoskey’s Blue Crew, we’ll follow a format that fits with a typical game night, beginning with the Ramblers’ suggestions for other schools that would like to join in the fun and video from our visit and followed by more of what we enjoyed from one of the state's elite student sections.

Take some of these tips from the Rambler Rowdies:

• Get organized. Hewitt said that’s the biggest thing Boyne City has learned over the last few years of building a student section. Having regular meetings allows for brainstorming but also helps leaders form a plan for what they need to accomplish.

• Hit social media hard. Sections should assign at least two social media leaders who will not only post regular updates about theme nights and other announcements, but also take advantage of social media – like posting on the school’s Facebook page if permission is granted – to reach out to parents.

• Bring in the community. The student cheering section is for the students, but parents and other neighbors enjoy supporting the students as they offer support for their teams. Anything from inviting a well-known person in town on social media (“Hey Mr. Smith, we know you have those parachute pants from high school. Come to ‘80s night!”) to sending out section-themed game night alerts to parents on the automated snow day message system can generate excitement.

• Earn administrators’ trust. We have heard this on just about every BOTF visit over the years, and it’s true – if principals and athletic directors are in the loop, they can provide more opportunities and help. And if administrators trust student section leaders, the possibilities to try something new are endless.

After last year making the BOTF Finals for the first time, Boyne City section leaders discussed what they needed to improve to win the title. Their findings: more community involvement, more younger student involvement and something that not only created a great atmosphere but made the Rowdies different from every other section in Michigan.

Enter the superhero, thanks in part to the goat.

The driving force behind the Rambler Rowdies is “Rambler Sports Network,” a daily visual imaging/arts and broadcasting class. Not only do RSN students film events all over the school, but section leaders are able to use class time to help build game night atmosphere – which at the end of last school year meant working with teacher Randy Calcaterra to create Captain Rowdy, a distant cousin to the Harlem Globetrotters’ mascot Globie.

Deciding a superhero character would be more useful than a bouncing wheel (for Rambler, a car built during the early 1900s), section leaders set to work. Fitzpatrick and senior Hailey Fogo designed a logo. Together, the group decided on Captain Rowdy’s name. And they also added the jersey number “130” on his back, signifying the senior class, which will be the 130th this spring to go through the high school.

Captain Rowdy was ordered in June. Only five people knew about it until September, when the rest of the RSN class was brought in on the secret. They kept it quiet until October, when Captain Rowdy was unveiled during the annual “Spirit Day” activities as part of Homecoming week.

But a local goat was among those who made it possible. Captain Rowdy was expensive – which led to various fundraisers, with one surely among the most memorable. As noted, section leaders had wanted to get middle school students more involved this year – so, based on another school’s idea overheard at November’s MHSAA Sportsmanship Summit in Marquette, the Rowdies asked their middle schoolers to raise a certain amount of money in exchange for their principal kissing a goat.

(That dare was just part of outreach done to get the school’s next classes of Rambler Rowdies involved. See more in this video from the BOTF “Challenge Round.”)

Meanwhile, as Spirit Day approached, RSN students hung pictures of Captain Rowdy’s chest logo and “CR” belt buckle around the school to provide a little hint of what was coming. (Another memorable moment: The day before the unveiling, they set off the school’s smoke alarms testing pyrotechnics.)

Finally, the moment came that was four months in the making. The curtains opened (on second try) and there was Captain Rowdy, worn by Kelts, for all to see.

“It’s a crazy day,” Harmeling recalled. “Everybody loves it. So we brought everybody into the auditorium … and this year, all the lights went down and we had this whole setup – we had fire and smoke and lights that were timed up to the music.”

“It was just a complete shock,” Fitzpatrick said. “It was like, ‘Oh my gosh.’ … He was just standing still. So nobody knew he was about to move. So he jumped off and was running through the crowd.”

And that was just the beginning of the fun.

“The endless amount of possibilities you can do with him just generates so much fun,” Hewitt said. “And everyone is like, ‘Oh, what’s Captain Rowdy going to do this week?’”

Section leaders watched the MHSAA video from last year’s “Fright Night” visit and made it a goal to make every game night that extra level of exciting.

Basketball is where it’s at in Boyne City. The school’s lone home wrestling meet had to be canceled, and the Rowdies were planning on attending the first-year bowling team’s only home meet – but for the most part winter sports mean nights in the gym.

Just before this hoops tip-off, the Rowdies got Kalkaska involved as well. The pregame introductions started with a halfcourt boxing match between Captain Rowdy and the “Baron of Bad Sportsmanship” under the spotlight. But then, for player introductions, starting lineups for both teams were announced in the spotlight as well – a nice touch, considering that’s usually only reserved for the home team’s players. Free admission also was given to students from both schools, and the “Wheelhouse” was packed.

Of course, Captain Rowdy was a big focus of fun for the Rowdies – with “Rowdy Ball” and the “Captain Rowdy Dance” among activities filling in quarter and halftime breaks. But when the game was on, the section was all in – and charged up to help pull out a close 54-49 win over the rival Blazers.

What do you do during Quarter Breaks at Rambler Games? Watch a thrilling game of Rowdy Ball of course! BCHS Student Section, the place to be!
https://t.co/A0xXFiJepQ via @YouTube

A big takeaway from our 2017 trip to Boyne City was how students there, like most schools, are involved in a variety of sport and non-sport activities – but the Rowdies try to get them all out for game nights.

Wearing Captain Rowdy for most of them is senior Quentin Nottage, a major contributor in the school’s drama productions – but according to section leaders, not a regular at basketball games before taking on his new alter ego.

Some just come to dance: “A lot of our chants are for the Ramblers, but it’s beat-oriented. You’re cheering for your team, but at the same time it’s super-fun to do the chant. Because you’re jumping around, having a great time.” 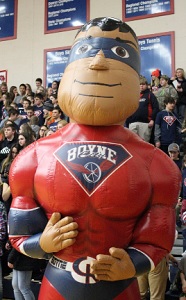 Worth the Battle: “Battle of the Fans has really just changed the culture in this school too,” Kelts said. “Everyone knows me as a leader of the student section, and a teacher will come up to me and say, ‘Good job last night.’ You mention Battle of the Fans and everyone here knows what you’re talking about. They know it’s going to be super fun. It’s brought everyone together.”

Worth the investment: “We want the games to be really fun and interesting, so we have money from (RSN) sponsorships going into what we can do to make the games interesting. We had money set aside for (something like Captain Rowdy) that had been gathering. So we were like, ‘Hey, this looks really good. And this would make being in the gym epic.’”

Rowdy-ness will live on: “Even though Jake and I lead chants for the most part, everyone is so involved. At its best, I think it’s more of a group thing. As long as there’s a group of people doing it, it’s going to keep happening. A leader will always emerge.”

Next stop on BOTF: We'll finish the 2018 BOTF tour at Buchanan for Friday’s boys basketball game against Berrien Springs. The report from that visit will publish on Second Half next Monday, with our social media vote beginning the next day, Feb. 20, and the champion announced Feb. 23. Click to see our report on Petoskey’s Blue Crew.