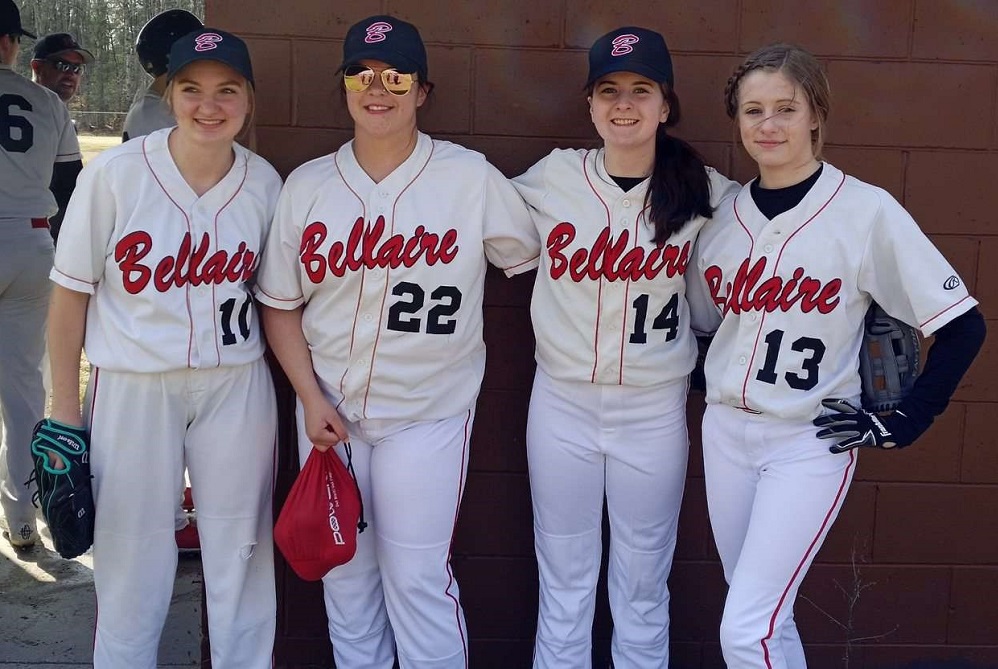 Huffman played third base the Bellaire Eagles. Fisher was a designated hitter and outfielder. Dawson regularly played outfield and catcher, and Clark handled second base.

Huffman is senior now. Fisher is a junior. Dawson and Clark are sophomores.  They were playing for the Eagles softball team. Today, they are members of the Eagles baseball team. Small numbers forced the cancellation of girls softball for this spring.

Hesitant, maybe at first, the four student-athletes made the leap to baseball.

“This is a slightly unique situation, and I am very proud of the girls for stepping out of their comfort zone to help the baseball team,” said Brad Fischer, Bellaire’s athletic director.  “Unfortunately, the numbers were just not there to support a softball team.

“When we had to make the tough call to cancel our softball season, we told the girls that they are more than welcome to join the baseball team – and we are happy that a few chose to do so.”

The girls played their first game Thursday at Pellston for first-year coach Chris Bearup after a handful of games were lost to spring weather complications. All four got playing time.

The girls, and athletic director, credited the coaches for the smooth transition to the baseball field.

“Coach Bearup has done a great job of getting the girls comfortable and making sure they know they are part of the team and have every opportunity that the boys do,” said Fischer, also Karsyn’s father. “His leadership has been tremendous.

“We are fortunate to have him.”

The girls started to become very comfortable with baseball during a meeting after the first practice with Bearup and assistant coach Al Balko. 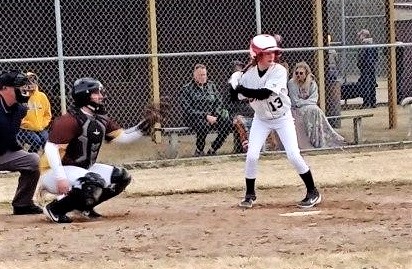 “They were worried about the boys picking on us and treating us like … we weren’t going to be as good as them,” recalled Clark of the post-practice meeting. “Now they’re being more incorporative.

“They are really trying to make us feel we’re at home, and that we’re welcome,” she continued.  “They’re giving us a chance to try everything.”

Huffman has dabbled with pitching, and that may work out. It may be a battery with Dawson in the catching position.

“We all got to practice (pitching),” Karysn said. “Alex was in her catching gear, and we pitched.

“Bella was pretty good at it naturally.”

The girls were confident going into Thursday’s season opener. Their eyes are now opened wider as a result, and they are better prepared to compete as they head to Central Lake on Monday. Huffman, Dawson and Clark all got their first at bats out of the way.

“It was a little nerve racking,” Huffman said.

Dawson was in the starting line-up for the first game. She experienced running the 90-foot bases, after being used to the 60-foot base distances in softball. 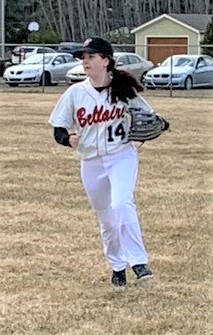 Bellaire lost 9-1 and 11-0 to Pellston, which had already played two games this year.

The girls are coming into baseball with slightly different expectations for themselves as individual players. All plan to try working harder than the boys.

“I went into this season with high expectations for myself because I knew as a girl on the baseball team I had to work harder than any of the boys to try to prove how good I am or how good I am possibly going to be,” Clark noted. “I think speaking for all the girls, we do.”

Numbers also are low for the baseball team. There are 14 on the roster. The tough result of no softball may have saved the baseball season.

And the senior boys are down to their last swing for a District championship. The boys in the Class of 2022 have yet to win a District in any sport. Cole Robinson is among the seniors seeking that first title.

Robinson had his sophomore baseball season cancelled by the pandemic. His football teams saw limited success. The Eagles boys basketball team made substantial improvements especially this past season, but lost its District opener.

Robinson has carried on since losing his father and coach Brock Robinson in April 2020. His dad served as the assistant baseball coach and head football coach for the Eagles before his unexpected death at the age of 54.

The girls would have been cheering for him to get his first District title. But now they plan to help him win one with their play on the diamond.

“We love Cole,” together they exclaimed.

PHOTOS (Top) A foursome of past Bellaire softball players, from left Alex Dawson, Bella Huffman, Karsyn Fischer and Brooklynn Clark, take a photo during their baseball debuts this week. (Middle) Brooklynn Clark stands in at the plate against Pellston. (Below) Karysn Fischer plays right field for the Eagles. (Top photo by Julie Clark, action photos by Kendall Fischer.)