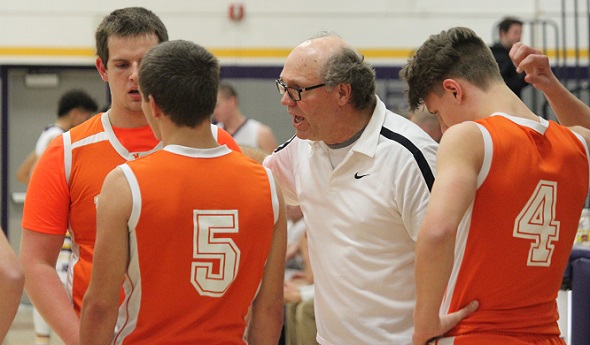 ESCANABA - Mark Branstrom was a prolific scorer when he played at Perkins High School more than 40 years ago.

Now, as coach of the Mid Peninsula Wolverines – the consolidated school that grew out of Perkins and Rock high schools in 1977 – defense has been the calling card for Branstrom as he tries to overcome the odds and put his players into competitive positions.

"It might look ugly. We are not as good as anybody else but we can play defense with anybody," Branstrom said about developing an approach that gives Mid Pen – with just seven players on the varsity – a good chance to hang around against better teams with deeper rosters.

Branstrom became Mid Pen's coach in 1984-85, sitting out the 2007-09 seasons for health reasons. The Wolverines are off to a tough start this winter at 0-6, still searching for their first win and with a couple of close losses. But against heavy odds, he has guided Mid Pen to a pair of Class D District titles and one Regional championship and was selected Upper Peninsula Class D Coach of the Year in 2015-16.

That happens through diligent practice sessions, made easier perhaps because Branstrom has also served as junior varsity coach the past four years.

"Everyone knows their job," said Damian Richmond, a former player now with the revived program at Bay de Noc Community College in Escanaba. "He makes sure everyone is in their spot. He runs plays over and over in practice."

Branstrom, who has coached all three of his sons during his tenure, adopts a buddy-buddy approach with some players and serves as a father-son figure as well, according to Richmond. "He took me under his wing," said Richmond, who indicated Branstrom played a vital role in his decision to play college basketball after graduating from high school in 2016.

Mark Branstrom holds the scoring record at the former Perkins school, scoring 1,451 points for the Yellowjackets, who played in one of the smallest gyms in the state – typical of that day and age.

"The basketball floor is my element," said Branstrom. "I enjoy every aspect of it, and then I have the kids who respond. I get to teach (young) people who are like a sponge.

"There is never a time since I went into coaching that I did not think we had a chance to win, even against (three-time Class D champion) North Central these last few years." 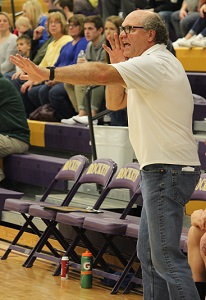 That was underlined in a recent game at Rapid River, which had halted North Central's state-record 84-game win streak Dec. 7. Mid Pen led much of the first half, using tough defense and a patient offense with Branstrom adroitly guiding everything from the sideline. That lasted until the Rockets settled in and scored the final nine points of the half en route to a 67-41 victory.

"The hardest thing is to get them to communicate on the floor defensively," said Branstrom. "It is like a musical for me to sit there and watch them when they communicate on defense."

Rick Pepin, now Rapid River athletic director but a former coaching opponent of Branstrom, knew what he was getting into against the Wolverines.

"He's always done a great job forcing tempo to fit his style. He never lets his kids play outside of their ability," said Pepin after that recent game in Rapid River.

Branstrom, who has mellowed considerably in recent years, now understands another side of coaching better. "Everything happens for a reason," he said, recalling his earlier days when he was prowling the sidelines with a hot temper.

"I get along with people a lot better (now). There is so much more to basketball than just basketball," he said with a twinkle in his eye. He said long-time basketball referee Dave St. Onge of Marquette was a factor in that change, telling him once "you've got to enjoy this."

Coaching the jayvees has also helped in that adjustment. "It is energizing to the point it has made me a better coach at the next level," he said. "This year I've literally had to collect kids just to have a jayvee team (three of the starting five are in their first year of basketball)."

That underscores why he has stayed on the sidelines. "It is for the love of it. I extremely enjoy it," Branstrom said. "I'm doing something for the kids."

His two teams will practice together, and varsity players will serve as assistant coaches.

The response of his players has kept Branstrom motivated to be in the gym and handle the extensive travel during the winter. His family also lived briefly in Coldwater and White Pine before finally settling in Perkins prior to high school, and he said a childhood friend in White Pine was a big influence.

Ward Helakoski is the son of Ed Helakoski, who directed Chassell to a then-state record 65 straight wins and three consecutive Class D basketball titles in the 1950s. Young Helakoski was a good all-around athlete and excellent student. "He helped me out considerably. My grades improved and I stayed eligible," Branstrom said, adding, "I dedicated myself to basketball when we moved to Perkins because we had no football."

He has remained dedicated, to the sport and to his players, through all the ups and downs of his profession. "I won't leave," he said. "I think I do a pretty decent job. If I wasn't, I would leave. You have to be dedicated to the kids, and I am extremely dedicated and loyal to the kids.

"I love Class D basketball. We have one of the best Class D (basketball) conferences in the state. The competitive level is to the point where the level of play has gotten so good." 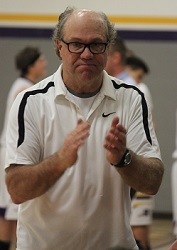 However, he has seen how declining enrollments impact the game, noting the 67 students at Mid Pen face Class D schools with enrollments just shy of the Class C level. "Getting to twice or three times the enrollment levels in the same class is not good," said Branstrom.

More than a dozen U.P. schools have enrollments below 80 students. But those are the kind of challenges that also motivate Branstrom and his athletes. Branstrom also was cross country coach for the Mid Pen boys and girls teams last fall, guiding the girls to a Division 3 runner-up finish in the Upper Peninsula.

He believes the farming, rural community is beneficial in the work ethic displayed by many U.P. athletes. "They seem to work harder," he said, noting their academic and athletic endeavors seem to confirm that observation.

Pepin recalls his battles against the Wolverines. "I have a tremendous amount of respect for Coach Branstrom," he said. "I watched him coach in the (lopsided) jayvee game (last week) and he never gave up, he never stopped coaching. He took every advantage to teach that team."

Pepin noted Branstrom was also teaching character and pride during that game. "Those are important character traits for life," he said.

"He has never given up on his community, his school, his student athletes. When Mark Branstrom is coaching our kids, they are better off. He makes your team play four quarters because he inspires his kids to play hard."

Basketball has obviously changed since Branstrom led the Upper Peninsula in scoring in 1974-75, with the inception of the 3-point shooting arc primary. "The mid-range game is not there anymore," said Branstrom, who worked that area of the floor.  "In pick-up games and practices, they want to shoot those threes, and that has changed everything.

"The two-point shot is still worth so much more. The threes make it a more exciting game to come back (from a deficit), but it takes away from the scenario of the inside-out game. I like the mixture. I'm not for it, but I deal with it."

Dealing with players has also changed during his tenure, as he noted he could not coach today the way he did earlier in his career. "You've got to roll with the flow," he said, which includes adjusting to evolving basketball strategy and how a coach and player communicate. "If you don't change, you don't belong there," he said.

Branstrom has adjusted through the years and shows every night he is totally involved with the game and his players.

PHOTOS: (Top) Coach Mark Branstrom of Rock Mid Peninsula talks to his varsity during a timeout at a recent game in Rapid River. Branstrom, who is also the junior varsity coach, has just seven boys on his varsity team. (Middle) Branstrom directs his team to back off on the tempo as the Wolverines bring the ball up court against the Rockets. Branstrom has been the Mid Pen coach since 1984-85 after playing at Perkins High School, which consolidated with Rock High School in 1978 to become Mid Pen. (Below) Branstrom applauds his team prior to pre-game introductions. (Photos by Dennis Grall.)