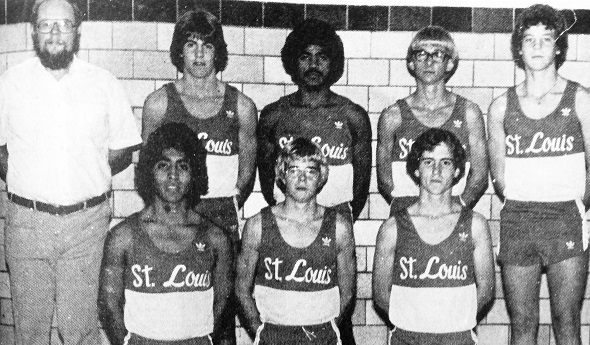 His former coach at St. Louis is one of the main reasons Dale Devine has been coaching cross country the past 25 years at Alma High School.

That coach, Jerry Mayer, passed away Dec. 8, at the age of 72 after battling Parkinson’s disease.

“Jerry and my friend Craig Higby got me interested in running,” Devine said. “One thing is Jerry always made it fun, although he also worked us very hard. Those times there was a lot of overtraining, but surprisingly none of us got injured. Maybe it’s because a lot of the kids ran around a lot more (than kids today).”

Higby was the individual MHSAA Finals champion on the Sharks’ 1979 team coached by Mayer, which edged Freeland 86-88 to win a Lower Peninsula Class C title at Clare.

Higby completed the three-mile course in 14:49, and was joined in the top 10 by three teammates. Armando Garza, who went on to run for Alma College, took fourth in 15:25; Paul Diaz, who later competed for Southwestern Michigan Community College, was sixth in 15:32; and Doug Border, whose son Brayden was an all-stater for the Sharks in 2007 and 2010, took 10th in 15:36.

But the Gratiot County Herald story that week said “the place that made the whole difference was Steve Crumbaugh in 65th with a time of 16:50. He gained several places near the end of the race which proved to be the winning margin over Freeland.”

Devine, who finished 83rd in 16:52, four places behind teammate Pete King in 16:51, said, “I remember personally I needed to do a lot of running the prior summer just battling to be in the top seven because we always did pretty well at the state level.”

Mayer was quoted as saying that the 1979 cross country MHSAA title was the first at St. Louis High since the boys basketball and track teams both earned one in 1953.

“I don’t remember a time, and there was never a course or a workout where I feel like we complained or made excuses about courses,” Devine said. “That had a lot to do with Jerry and his expectations. We did a lot of hills, especially at the old Edgewood Hills Golf Course in St. Louis (now Hidden Oaks Golf Course).”

“He was known for having a temper,” Devine said. “But he knew what potential his athletes had, and was frustrated when they decided to do things on their own instead of listening to his advice.”

Diaz still holds the 400, 800 and 1,600-meter records and Garza the 3,200 record listed on the track and field records board in the school’s gym. All were set during the 1980 season, a few months after the cross country championship.

Janell Best Vier still holds the 100, 200, 400 and 800 records in girls track and field for St. Louis and was part of an unofficial Michigan Interscholastic Track Coaches Association state championship in 1978 won at Potterville. (The Michigan High School Athletic Association began crowning champions in 1979.) 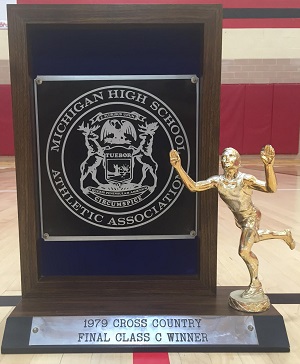 “Coach Mayer had a way of inspiring us to reach higher and dig deeper,” she said. “Many times the goals he set for us were much higher than we would have set for ourselves. After a while, we believed we could do what he told us we could do. Winning was always the goal. He assumed that we could achieve this, so we thought that we could always come in first.

“He cared about us individually and we wanted to make him proud, and not disappoint him. So we exerted maximum effort. Really, that was all he would ask or expect.”

She said Mayer’s sense of humor was dry and constant.

“There was laughter throughout our practices, meetings and even at our meets,” Best Vier said. “We were trading jabs constantly.”

Kathy Hutfilz coached the St. Louis girls track and field team from 1973 until she became athletic director in the mid-1980s at the same time Mayer coached boys track as well as boys and girls cross country.

“Jerry worked as hard as the kids worked at getting ready to compete in meets,” she said. “He cut (results) out of the paper, and we talked about where our best chances were to get points in meets.”

“He had a phenomenal knowledge of the sports,” said Rudy Godefroidt, who coached Breckenridge to a Class C title in cross country in 1976. “He was always prepared, and made the rest of us coaches better.”

“Jerry had the ability to bring athletes along to perform at that level,” Godefroidt said. “As a parent and co-coach, I always appreciated the way he treated athletes, brought them along and made sure they were prepared for their competition.”

Mayer taught eighth grade science classes at St. Louis for 30 years. He was voted the Michigan Coach of the Year for Class C Cross Country by MITCA after winning the 1979 title. After his retirement, he served as an assistant coach at Hemlock.

Devine says he tries to emulate in his coaching each year the light, fun and family atmosphere along with high expectations he experienced with Mayer.

Mayer was at Hemlock when Devine started as Alma’s coach.

“He told me after a while I could call him Jerry,” said Devine, who echoed Best Vier’s noting of Mayer’s humor. “One of the nicknames we had for him was Sunshine, although we didn’t tell him to his face. I had him for an eighth grade science teacher, and one of his famous statements was ‘it’s another beautiful day in the thriving metropolis of St. Louis’.”

Although serious in big track and field meets, if Mayer knew the opponent for a certain meet was weaker, he would allow middle distance and distance runners to try some different events – including sprints.

St. Louis was in the Mid-Michigan B league in the 1970s, and the boys and girls track teams often ran meets on separate days of the week. Once they joined the Central Michigan League in the early 1980s, they began competing in meets together as track teams do nearly all of the time today.

“The kids ran similar workouts, guys and girls, and they all got along really well,” Hutfilz said. “They were friends out in public and on the track. We were like a big family. The end-of-year awards were always a cookout at someone’s house, and we did that together.”