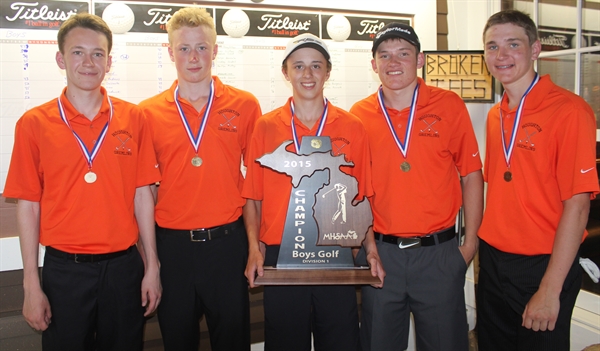 IRON MOUNTAIN – The Houghton Gremlins were hoping to defend their MHSAA title while also hitting around 310 Thursday at the Upper Peninsula Division 1 boys golf championship tournament.

They easily achieved their first goal, winning their second straight crown with a 325 that put them 15 strokes ahead of perennial contender Marquette. The next four teams also were bunched, with Escanaba at 342, Gladstone 343, Negaunee 345 and Kingsford 350.

The Gremlins posted a school-best 297 two weeks ago at Houghton Portage Lake Golf Club, but coach Corey Markham warned them that approaching that mark would be difficult at challenging Pine Grove Country Club, which was founded in 1902 and ranks among the top five courses in the Upper Peninsula.

"This is a challenging course. It is really difficult," Markham said of the hilly, tree-lined par 72 layout that stretched to 6,297 yards from the blue tees.

He was more than happy with how his squad attacked Pine Grove, with teammates Gunnar Stein and Brendan Longhini finishing 1-2 with 76 and 79 strokes, respectively. Only seven other players shot fewer than 85, including Houghton's Wyatt Liston, who had 83. 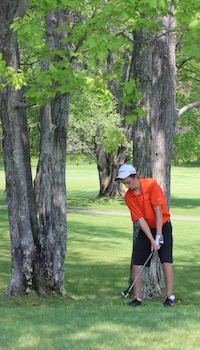 That kind of depth put the Gremlins in good position to turn back any challengers. "They showed up and were solid. They were very impressive," said Markham, whose girls team won its fifth straight U.P. crown.

Markham said the success of both teams is the result of a strong junior program at Portage Lake.

"The key is they get out and play and work on their games," he said. "They chip, putt, hit the (driving) range. They strive to get better.

"We have an awesome facility and Portage Lake caters to our youth. They get to play a lot of golf. That is a big part of our success."

Longhini is the only senior on the squad, which bodes well for the future. "They are the biggest golf nuts," said Markham. "You won't find many people out there more often than our kids. They are buddies. They love to play. They compete against each other every day for bragging rights."

Stein, who posted a career-best 70 two weeks ago when the Gremlins carded that 297, is a junior. The Gremlins had a practice round Wednesday and learned some of the tricks to play Pine Grove. 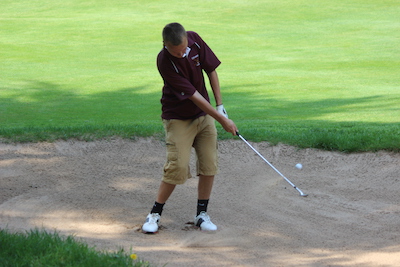 His tee shot on the 531-yard 12th landed on the left side rough and he had to punch out from between two trees that limited his backswing.

Handling the undulating greens was also a key. He didn't sink a birdie but also didn't have any three-putt greens, with solid approach shots a key. "If you one-putt every hole it makes par a lot harder," he said.

Stein said the team's depth is a critical component to the overall success. "We qualify for our spots. It is like a tourney in itself. Qualifying is a tourney atmosphere," he said. "We're used to playing under pressure. You have to embrace it."

PHOTOS: (Top) Houghton golfers stand with their MHSAA championship trophy. (Middle) Gunnar Stein of Houghton chips out of a tough lie between trees on the 12th hole at Iron Mountain Pine Grove Country Club on Thursday at the Upper Peninsula Division 1 Final. Stein was medalist with 76 to lead the Gremlins to their second straight title. (Below) Channing Modschiedler of Menominee blasts out of the bunker on the 12th hole Thursday. He shot 89.(Photos by Dennis Grall.)