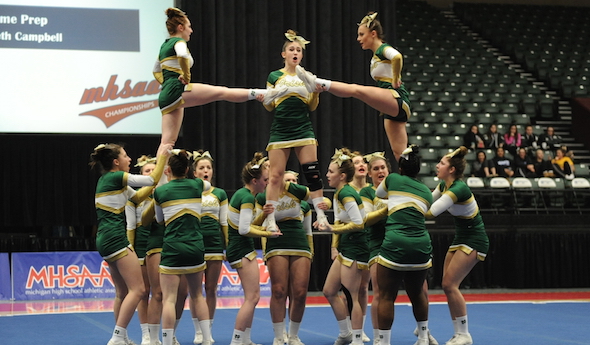 GRAND RAPIDS – The seniors on this year’s Pontiac Notre Dame Prep competitive cheer squad made a pact three years ago as freshmen after placing runner-up to Richmond in the MHSAA Final.

They made a vow that ultimately came to fruition Saturday night.

“Our freshman year we came here as runner-up, and ever since that year us seniors made a promise that we would never have that feeling again,” Fighting Irish senior Stephanie George said. “We knew we would do everything we could to make sure we carried the team to three straight championships our senior year. We worked extremely hard these past few years to get here.”

Notre Dame Prep’s six seniors lived up to their promise by collecting the program’s third consecutive MHSAA Division 3 championship at the DeltaPlex.

The Fighting Irish prevailed with a 775.48 total and topped runner-up Richmond, which finished at 765.86.

“Every year at the completion of this, my seniors-to-be circle up on the corner and make a promise to each other that they are going to defend what the seniors started,” Campbell said. “So they made that promise last year in a circle and said that they are going to be three-time state champs. They’ve talked about it at practice since June.”

Campbell said the ultimate goal each year is to win an MHSAA title, and steps are taken throughout the season to achieve it.

While some teams may shy away from making bold statements about future success, the Fighting Irish have embraced the challenge.

“It’s a mindset, and the culture of our team,” Campbell said. “They make a promise and they deliver on that promise.

“When you’ve won before and have that target on your back, it can be stressful on kids. We were the underdog for so long that we’re just not afraid of it. It’s ours to lose and we’re going to do everything we can to defend it. Talking about it and not being afraid of it gives our kids the confidence to deliver.”

Notre Dame Prep jumped out to an early lead and kept the momentum intact throughout.

“I just feel beyond blessed,” senior Lauren Kavanagh said. “These girls have worked so hard and they stuck with us seniors through the highs and lows of the entire season. I’m so happy it fell in our favor today.”

The Fighting Irish closed with a 318.40 in Round 3 to secure the championship.

“We were told we needed to hit it, and I knew our team could do it,” senior Paige Lombardo said. “And so when we hit it, I knew it was the last round I’ll ever be doing. I just stepped off the mat and I felt relief.”

Round 3 had been a struggle for the Fighting Irish, but it finally came together toward the end of the season.

“We fell every time and it became a mental block,” Campbell said. “It was a major goal to hit that round, and they turned it on. By Districts and Regionals, it became our strongest round. They were excited and ready to perform it.” 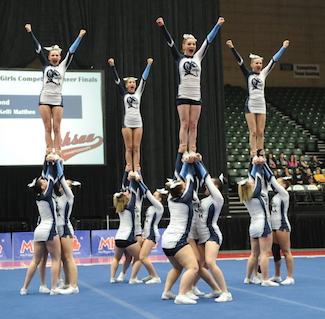 A similar disappointment as last year was felt by Richmond as it fell short to the Fighting Irish for the second straight.

The Blue Devils won back-to-back MHSAA championships in 2012 and 2013, but have been unable to reclaim the title the past three years.

Richmond coach Kelli Matthes was frustrated after the results were announced.

“I couldn’t have asked for anything more from them today,” Matthes said. “If you saw our third round, I think it was the best third round of the day. The fact that we had to go first, it just plays into the cards.

“All I know is there are 28 ladies over there that busted their butts for me for nine months … . They are happy with how they performed, but frustrated with the outcome.”

The Blue Devils graduate only two seniors, and have a large group of eighth graders ready to make the jump.

“The program is in great shape, no doubt about it,” Matthes said. “And we’re going to keep plugging along. Maybe at some point, things will be different.”