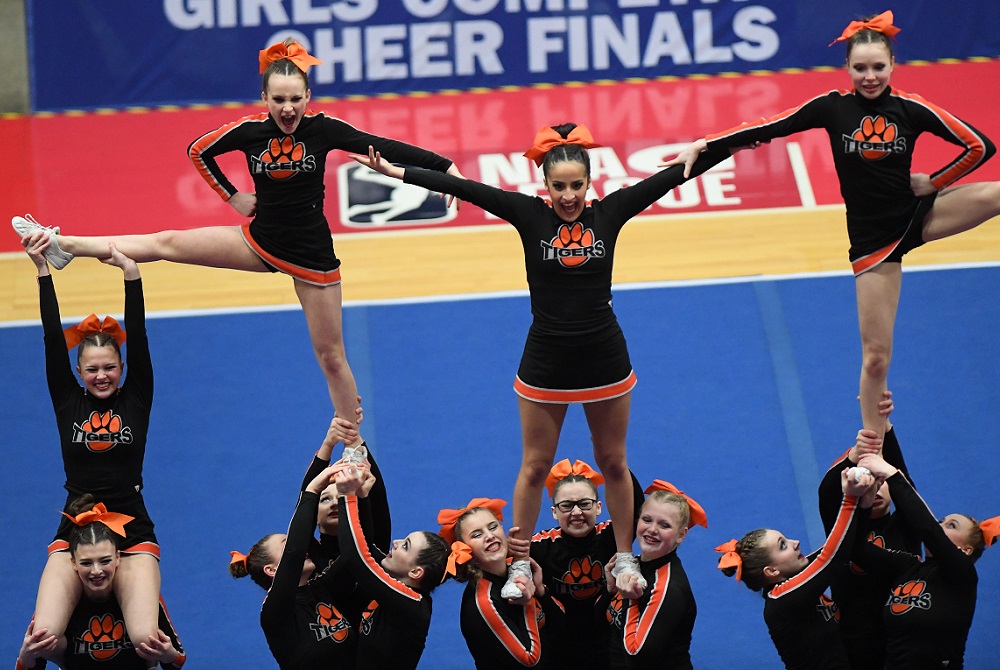 Both divisions of Saturday's MHSAA Competitive Cheer Finals will welcome back their reigning champions, and Allen Park in Division 2 and Hudson in Division 4 have impressed again this winter.

But there are plenty of contenders who would like to take their places, with six teams in both divisions seeking their first Finals championships in this sport.

Spectators will be limited at Saturday's Finals, but both will be viewable with subscription on MHSAA.tv. Division 2 begins competition at 10 a.m., with Division 4 at 3 p.m.

Here's a glance at all eight teams competing in each of those divisions:

DEWITT
League finish: First in Capital Area Activities Conference Blue.
Coach: Candace Heskitt, 13th season
Championship history: Division 2 runner-up in 2015 and 2007.
Top score: 778.46.
Team composition: 22 total (eight seniors, nine juniors, four sophomores, one freshman).
Outlook: The Panthers rose to third at last season’s Finals and have not finished lower than second at a competition this winter – and were only 64 hundredths of a point off the lead in finishing runner-up at their Regional. The majority of last season’s top achievers are leading the way again. Seniors Gabrielle Cooney and Aubrey McKinley and junior Kyleigh Greenhoe made the all-state first team last season, while junior Madailein Boyle made the second team and senior Ashley Austin and junior Anneliese Phillips earned honorable mentions.

HART
League finish: First in West Michigan Conference.
Coach: Jennifer Hlady, 10th season
Championship history: Seeking first top-two Finals finish.
Top score: 687.86 at District.
Team composition: 13 total (two seniors, one junior, five sophomores, four freshmen).
Outlook: With 10 underclassmen filling most of the roster, Hart repeated as league champion and finished runner-up at both its District and Regional posting two of its four highest overall scores of the season. The Pirates have finished first or second in 11 of their 13 competitions – an impressive surge for a team that saw its season end in the District a year ago.

PEWAMO-WESTPHALIA
League finish: Does not compete in a league.
Coach: Staci Myers, 14th season
Championship history: Nine MHSAA titles (most recent 2019), 11 runner-up finishes.
Top score: 745.98.
Team composition: 10 total (five seniors, two juniors, two sophomores, one freshman).
Outlook: The Pirates have traded top-two finishes with Hudson the last two seasons, and fell short of a repeat by 2.2 points a year ago. But they won both their District and Regional and have finished lower than second only once this winter. Junior Lindsey Pohl and sophomore Emma Flanigan made the all-state first team last season, while senior Ellie Pohl made the second team and junior Halie Myers earned an honorable mention.

VANDERCOOK LAKE
League finish: First in Cascades Conference.
Coach: Sarah DuBois, 20th season
Championship history: Seeking first top-two Finals finish.
Top score: 755.92.
Team composition: Nine total (six seniors, three juniors).
Outlook: Vandercook Lake has finished first or second at 10 of 12 competitions this winter on the way to returning to the Finals, and posted its five highest overall scores over its last five meets. The Jayhawks were second at both their District and Regional, but their score at the latter would have won the other Regional by 25 points. Seniors Kylie Baldwin and Breanna Ray both earned all-region recognition in 2020.

PHOTO: Hudson competes in Round 3 during last season's run to the Division 4 championship.