By Brian Spencer
Second Half

Ken Hofer has been nothing short of legendary during more than three decades as Menominee’s head football coach -- a tenure that came to an end earlier this month when he announced his retirement.

He guided more than a thousand athletes, and that influence extended to league rival Kingsford -- where his son Chris Hofer is the football coach. Ken also is known statewide as the guru of the single wing offense, a rarely-used but for the Maroons frequently unstoppable attack that does not utilize a traditional quarterback.

Hofer is a member of the Michigan High School Football Coaches Association and Upper Peninsula Sports Halls of Fame. He also served as the Menominee athletic director, principal, and assistant principal. He grew up in Stephenson, where he was an all-stater in football and track and field, and later competed in both sports at the University of Wisconsin.

Did you always want to become a football coach?

I was predicted to be a coach somewhere in our (Stephenson) annual (yearbook). So I suppose I was always predetermined to coach. However, before coaching I was in the service as a Lieutenant and spent two years in Germany. After Germany, I spent another five years working for Wilson Sporting Goods before I finally came back in 1964 to coach football and teach social studies for Stephenson.

How did you decide it was time to hang up the whistle?

Well, I’m 77 years old, so age was definitely a determinant. The biggest factor was that as much as my mind said I could continue, my body said “slow down.” So I guess age and my inability to continually go full throttle and stay energetic helped me make my decision.

In your 45 seasons, what is the most helpful piece of advice you are going to take away?

The best advice I will take away is to treat young people the way I like to be treated. 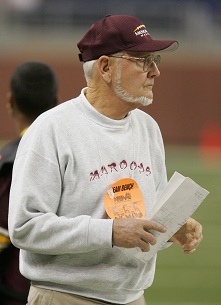 What do you plan to do with your free time, now that your schedule has opened up slightly?

I am going to try and catch up on stuff that should have been done a long time ago. I’m sure that my wife will give me plenty of stuff to do, too. I also want to try to travel more and visit my kids.  I now have a grandson who will be playing for Kingsford, so I will become a fan of my grandson’s at his Kingsford games.

Now that your grandson and son both have affiliations with Kingsford, will you become a Kingsford man?

No (chuckling), I will cheer for my son and grandson, but I will forever be connected with Menominee and Stephenson.

What was it like to be recognized by both the Michigan High School Football Coaches Association and Upper Peninsula Sports Halls of Fame?

It was like a utopia for coaching. When your peers give that honor it is a pretty special time. As a coach you don’t strive for that kind of accolade; however, it is definitely a special honor to receive.

What has been, in your opinion, your greatest achievement as Menominee’s head football coach?

My greatest achievement will always be working with younger people; I think that is the most important thing that most coaches would like to have, is the ability to stay young by working with these young men.  You don’t always have to win to have that experience. Winning on the field doesn’t always correlate winning in other aspects of your life.

What advice can you give aspiring or current coaches who look to share similar successes as a head coach?

The biggest thing is to make sure that you treat the players like you like to be treated. Using that approach will get a great response.

Of your 300-plus career wins, is there any one that you find particularly special?

I always found that whenever I could beat Kingsford when my son was coaching (he said, followed by a bellowing laugh). My son Chris will like that one.

There are so many that I consider to be special. There were a ton of close games, too many to count. Two years ago, we had one of those close games where we played Morley-Stanwood, and won 41-40 in overtime (in a 2010 Regional Final). The young men played very hard. It was very special.

Do you think that your son will follow in your footsteps and coach for 45-plus seasons?

I think Chris has that type of coaching in his blood. He’s struggling physically with a knee injury; however he has a coaching mind that is as strong as ever.  I think he’ll coach until he won’t be able to.