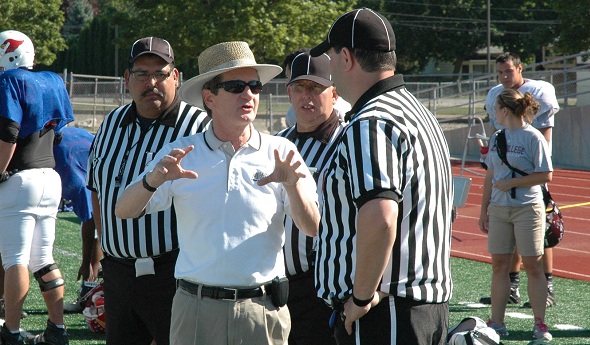 By Geoff Kimmerly
Second Half Editor

ALMA --Frequently in pairs, they lined up beside linebackers, ran the sidelines and monitored the goallines earlier this week, next to many of Michigan's best recently-graduated high school football players.

The athletes were practicing for Saturday's Michigan High School Football Coaches Association All-Star Game at Alma College. But beside and all around them, officials also worked to hone their skills with the upcoming season only two months away.

A group of 34 attended the MHSAA's summer clinic Monday and Tuesday, run in coordination with the all-star game for the second year. Some were veterans brushing up on new rules, while others -- like Flushing's Tim Collick -- were newer officials hoping to pick up some knowledge from 12 clinicians providing instruction and feedback.

"The biggest thing is just the different tips from experienced guys you don't find in the books," said Collick, 32, who was one of 14 chosen from clinic participants to officiate Saturday's game. "Different, helpful clues like keys that made them successful, made things easier for them." 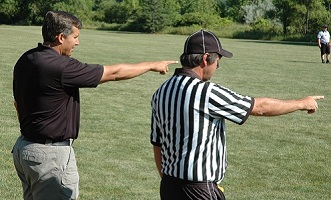 Instructors shadowed Collick and other participants during two practices and a Monday night scrimmage, providing guidance and feedback along the way.

Those practice sessions are combined with classroom instruction, similar to what the MHSAA has conducted during previous summers with basketball officials at Michigan State University camps.

Every participant this week came from the Lower Peninsula, but as far north as just below Mackinac Bridge, east from Detroit and west from the Grand Rapids area.

Two crews of seven officials were chosen from the camp participants to work Saturday’s game. The crews will alternate quarters, with five instructors also on hand to provide feedback.

The MHSFCA has been putting on the All-Star Game for 32 years, and has been a fantastic partner in providing an opportunity football officials don't often receive during the offseason, MHSAA assistant director Mark Uyl said.

"Football is unique in that there isn't a way to get live reps, while basketball, baseball and softball have summer team camps," Uyl said. "This is an opportunity for football officials to get training in the real thing."

Collick, a Flint Hamady grad who has been mentored by longtime Flint-area official Tom Rau, is heading into his third season of football as a back judge with a crew from the Genesee County Coaches and Officials Association. Although he'd heard a few of the speakers at the clinic before, he didn't know any of the officials before Monday. But he was sure to soak up as much as possible, with an eye on officiating for years to come and eventually, perhaps, at the college level as well.

"For me, one of the biggest things (at the clinic) is getting to make contacts with much more veteran officials. I'm learning from those guys," Collick said. "The instructors have worked at high levels as college officials, as high school officials for many years. It's nice to pick their brains."

PHOTOS: (Top) Longtime official and recently-retired MHSAA assistant director Tom Minter (center) works with an official during Tuesday morning's East practice at Alma College. (Middle) MHSAA assistant director Mark Uyl (left) points something out to an official during the West practice. (Bottom) Officals at this year's clinic came from all parts of the Lower Peninsula, including the Detroit, Grand Rapids and Mackinaw areas. 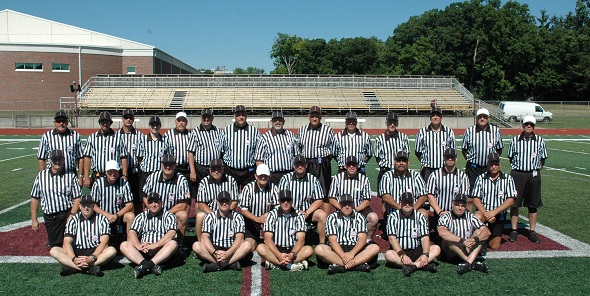