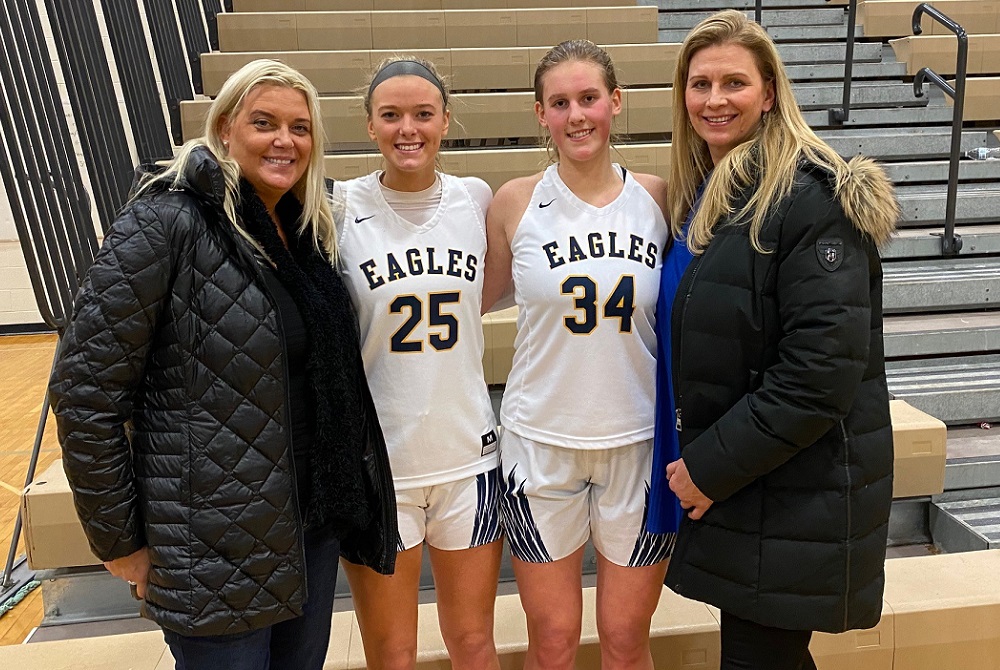 HARTLAND — Hartland girls basketball coach Don Palmer chuckles now when he talks about facing the Hall sisters 30 years ago, when they were at Walled Lake Western and he was at Milford.

“I never could beat them,” he said, recalling facing Valerie, Dianne and Michelle Hall, all of them 6 feet tall or taller. “That in itself was a rarity, and they were so athletic. We played against the Halls when I had some of my best teams (at Milford). We never beat them, and they never cease to remind me of it.”

A little less than 20 years later, Val and Dianne and their families moved to Hartland about the time Palmer was taking over the Eagles program.

“Whitney was in the third or fourth grade,” Dianne Sollom recalled. “He was like, ‘Oh, the Hall girls! I could never beat you guys!’ And I said, ‘I have Whitney and another one coming in. They’ll be playing for you one day.’”

Whitney Sollom played four years for Palmer and is now a sophomore on the University of Michigan basketball team, a second-generation part of the program as Dianne also played for the Wolverines.

Whitney’s younger sister, Lauren, is a senior starter for the Eagles. One of her teammates is her cousin Sarah Rekowski, Val’s daughter.

“I played with my sister and now I’m playing with Sarah,” Lauren Sollom says. “I know my family is out there with me on the court going through the same thing I am. It’s very special to me.”

Lauren, who has signed to play at Saginaw Valley State, is a senior starter, while Sarah is a sophomore.

They are both from a college sports background. Lauren’s father, Ken, was a quarterback at Michigan and Sarah’s father, Stephen, was a defensive tackle for the Wolverines during the 1990s.

Dianne, who graduated from Western in 1989 and played basketball for Michigan State, met her husband when visiting Val at U-M.

“They grew up in it,” Dianne Sollom said. “If I’m not telling them, (Val) is telling them.”

Like their mothers, Lauren and Sarah are tall. Lauren is a 6-3 forward, while Sarah is a 6-2 post player for the Eagles.

“With my mom being a post player and my being a post, it helps me to know what to do in certain situations, and she gives me pointers,” Sarah said. "She’s always helping me with my game.”

But both moms have their limits.

“We do watch film together,” Val says of her time with Sarah, “but not a lot. I let Coach Palmer handle all that. I know Dianne and Ken have that ongoing conversation and try to help when they can. But you have to back off. A lot of the time they don’t want to hear you at all. You have to give them some time, that 24 hours or whatever.”

Sarah enjoys the physical portion of the game and showed her potential in the season opener, when she had 13 points and eight rebounds. Lauren will get inside for rebounds, but plays mostly on the perimeter, hoisting up 3-pointers, something Sarah hasn’t done yet.

“Coach Palmer has not given her the pass yet,” Lauren pronounced as both giggled.

“He definitely would,’ Lauren said, to more laughter.

Sarah played on the JV team as a freshman last season, although her winter was interrupted by 10-day COVID-19 quarantines on a couple of occasions.

“She’s a little behind in her development,” Palmer said of Sarah, “but she really is a talented kid. She’s a big kid who, when she gets a rebound, it really is a rebound. We’re working on her constantly on her footwork.”

Sarah has been alternating with 6-4 senior Kate Jacobs in the post.

“It’s been up and down,” she says, “but I’ve gotten a lot of experience. I’m getting a decent amount of playing time.”

Lauren, meanwhile, is a team captain.

“Lauren’s a team-first player,” Palmer said. “She’s having a great year for us, she’s our leading scorer, leading rebounder and she’s having an MVP kind of year.

“They’re good kids,” Palmer said of the cousins. “They want to win, and they don’t care about how they do it. That’s the thing about this team. They’re all unselfish kids; you know, if they get 15 one night and get two the next and the team won both, they’re fine.”

In addition, Lauren’s fraternal twin brother, Brad, plays for the Hartland boys basketball team and will suit up at Concordia University in Ann Arbor next year, where he will play football.

For now, Lauren and Sarah are enjoying their year of varsity basketball together.

“We talk a lot,” Lauren said. “Basketball brings us together. Practices are fun, and I drive her to school in the morning and home in the evening. That’s good cousin time, family time.”

Speaking of family time, when Dianne (for MSU) and Michelle (U-M) played against each other in college, it was not unheard of for one sister to let the other have the occasional free lane to the basket, or for one to congratulate the other on a good shot while both were on the floor.

Once, castigated for complimenting her sister, Dianne said to her coach, “But she’s my sister!” 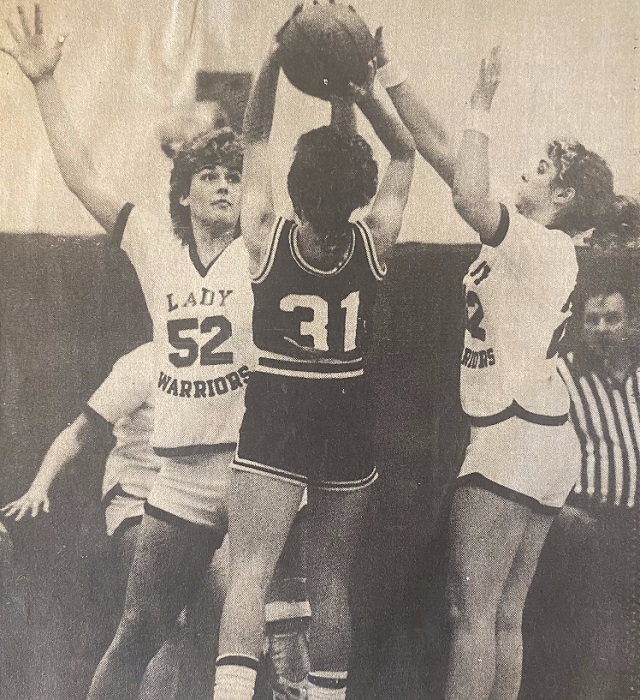 Now, Dianne and Val sit in the stands at Hartland games, cheering their daughters on.

“I enjoy watching her play,” Val said. “We’ve been watching Whitney and Lauren since they were young, and Sarah’s coming along. It’s fun to watch the light bulb come on and everything starts clicking. It’s really great when it all comes together for them.”

“I was on the court my entire life,” Dianne said. “I want to sit in the stands and watch my daughter and son. My husband is in the same boat. We’ve done it. We don’t have to shine.”

Hartland has been one of the top teams in the state this season, and the Eagles are looking toward a long run in the MHSAA Tournament, not unlike last year, when they reached the Division 1 quarterfinals.

To do so, the Eagles (14-1) are combining talent with togetherness, with nine seniors, including Lauren Sollom, looking out for themselves and a big sophomore in Sarah Rekowski who could play a key role down the stretch.

“She’s a very hard worker in practice and always has a smile on her face, even when Palmer is yelling at her,” said Lauren, joining her cousin with more giggles in a postgame interview, another shared moment in a season that already has produced memories for a lifetime and a special bond within a bond.