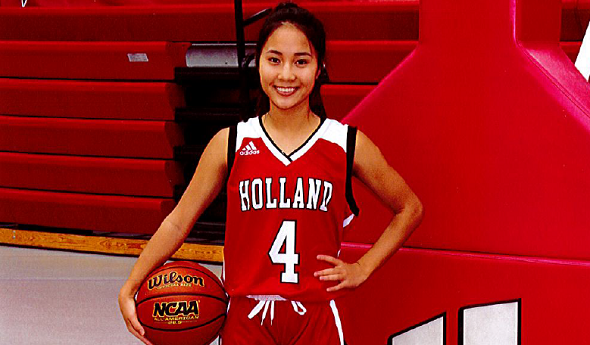 What LayRay Paw has experienced and overcome during her still-young life is likely unimaginable for most she encounters on the basketball court.

The Holland High sophomore and her siblings were forced to navigate a refugee camp in Thailand and the deaths of their parents – who had fled Myanmar before she was born. They then came to the United States and began a new life with a new language, new adoptive family and new customs.

And she has excelled.

Paw was recognized today as one of two winners of the 2020 Jersey Mike’s Naismith High School Basketball Courage Award.

The award recognizes a players who have “consistently gone above and beyond throughout the basketball season and (have) demonstrated courage in their approach to their team, their school, the game and their community.”

Following is an except from Paw’s nomination for the award, as told by adoptive parents Marsha and Bob Gustavson. Visit the Naismith Courage Award website for more including video with Paw, her parents and her Holland basketball and soccer coaches.

LayRay Paw was born in a refugee camp in Thailand called Mae La Oon. This particular refugee camp was for the people who were forced to flee from their home country of Myanmar due to war. They had to leave everything behind. When LayRay Paw was only a year old, her father was beaten to death after he attempted to leave the refugee camp in search of food and supplies for his wife and six children. Unfortunately, when LayRay was three years old, her mother became very ill and passed away. There are very minimal medical services for people living in refugee camps. After LayRay's mother passed away, she and her four older siblings were raised by her oldest sister, who was fourteen at the time. They survived on rationed rice, provided by the Thai government as well as anything else they could gather to eat from the river and forests. Because food was scarce, medical care almost non-existent, and fearing for the safety of her family, LayRay's oldest sister decided to sign up with the United Nations program to seek asylum in a different country.

In 2010, when LayRay was six years old, she and her five siblings were resettled in the United States and were all adopted by us. It was a huge culture shock for LayRay and her siblings upon arriving in the US. They did not speak or understand any English, had never seen or used running water, electricity, or toilets. They also had to learn to eat all new food, although rice continues to be the staple for each meal. Since being in the USA for ten years, LayRay now eats most American food, with the exception of cheese. Not only has LayRay completely caught up to her peers in school, but she excels in the classroom and she participates in many different extracurricular activities. Despite all that she has been through in her short life, she has demonstrated such resilience and is now a teenager who loves life, gives 100% to whatever she is working on and is always encouraging and helpful to others.

On top of basketball LayRay also plays soccer. During basketball season she works with our community to help run our elementary school camps. Girls are drawn to her. She is an amazing positive influence. 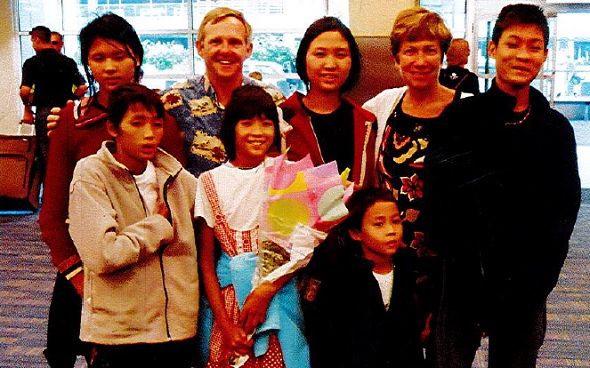 Photos courtesy of the Gustavson family and Holland athletic department.