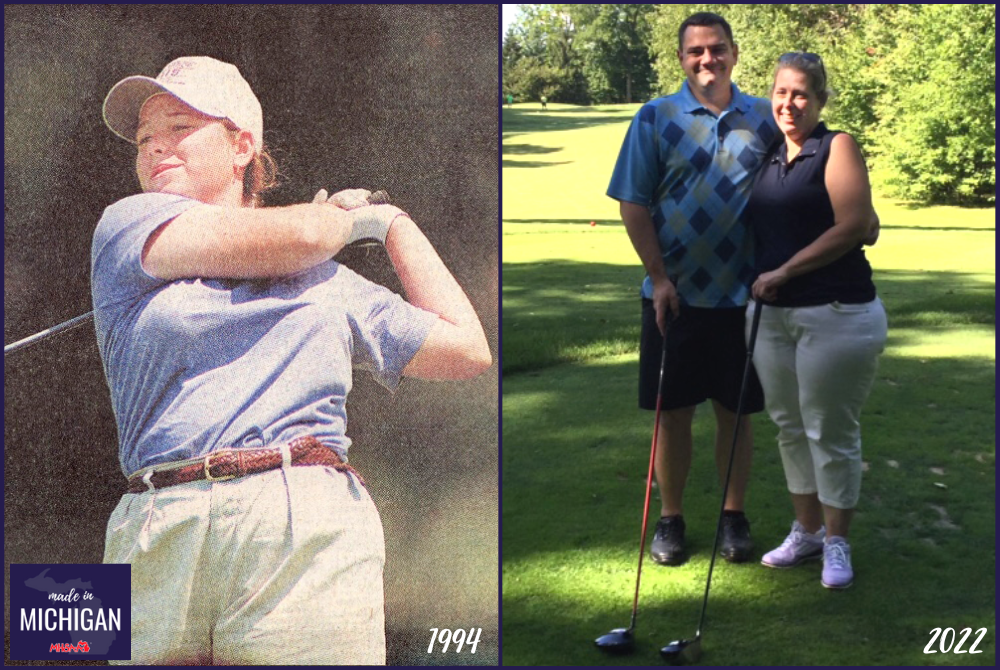 Golf has been a major part of Katy Nightwine’s past – and it could be a big part of her future.

But at the present time, there’s something more important to tend to that’s putting golf on the backburner.

Close to three decades after making history as a golfer at Ann Arbor Pioneer, much of Nightwine’s time and energy these days is as a stay-at-home mom raising her 2-year-old son Henry with her husband Bryan.

But even while doing that, it’s hard to get golf completely out of her mind, as she’s already trying to plant a seed with her son.

“He enjoys putting the ball on the tee,” Nightwine said. “We’re happy with that progress.”

If the little guy starts fully getting into the game, he’ll be hard-pressed to find a better mentor than his mother. 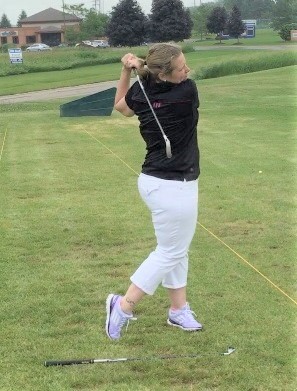 Nearly 30 years ago Nightwine, then Katy Loy, made history by becoming the first to win three straight MHSAA Girls Golf Finals individual titles in the highest classification/division when she claimed three consecutive crowns in Lower Peninsula Class A.

Nightwine said she grew up on a golf course in Dexter (now closed), which is where she learned the game and grew a passion for it.

“I liked going to golf more than I liked going to swim practice,” she said. “It became that thing I did with my dad after work. The weekends would be spent golfing, and that became my favorite place to be.”

Nightwine won the Class A title in 1993 as a sophomore, and then repeated as a junior in 1994.

She remembers going into her senior year with a lot of people talking about whether she could make it three in a row, but it didn’t put any more pressure on her than she’d already put on herself.

“If I didn’t get it then, that was going to be the blemish,” Nightwine said. “It had so much more meaning than it being the third time, but let’s cap it off and really give me something to remember.”

In her words, it “wasn’t looking so good,” for Nightwine on the front nine during the last round of the Final in 1995, but she turned it around on the back nine at Michigan State’s Forest Akers West to claim her third-straight title.

From there, Nightwine went on to the University of Michigan and was named Freshman of the Year in the Big Ten in 1996.

Due to a desire to play in warmer weather and more prestigious tournaments, Nightwine transferred after her freshman year to the University of Kentucky, where she finished out her collegiate career.

Nightwine turned professional after college and played in a futures tour, but a back injury ultimately led her to quit playing professionally. 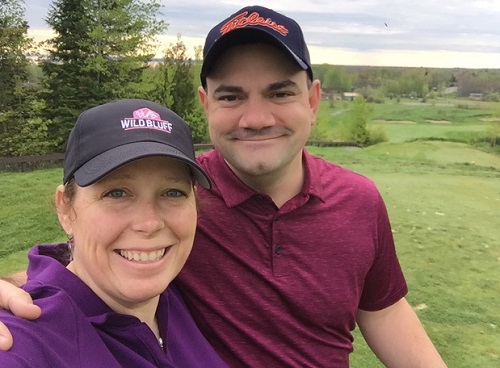 She worked as a golf instructor here and there. But in 2008, Nightwine started focusing on what she said was her other passion: Baking.

She opened up a pastry shop in Ann Arbor and continued in that business for 10 years before her family decided in 2018 to sell the property where the bakery was located to a company that repurposed it.

Now, Nightwine is fully entrenched in the business of being a mom and raising her son, but is hoping for a golfing revival in the future.

When her son gets older, she’s thinking about getting back into golf instruction or doing something else in the industry.

If nothing else, she wants to at least get back to playing consistently again.

“To see where my swing is at and go from there,” she said.

Regardless of what the future holds in the sport, Nightwine will always own a piece of state golf history, something she cherishes to this day.

“I will always be involved with golf, especially if (my son) takes a liking to it,” she said. “I have such fond memories of people I met.” 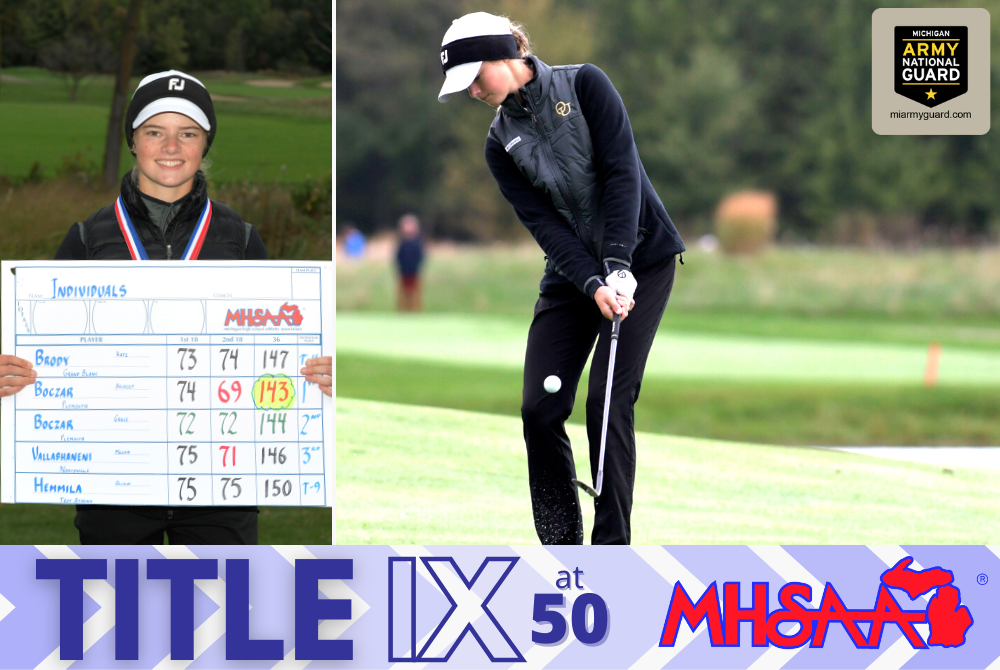 Bridget Boczar, together with her twin sister Grace, faced what eventually would prove a life-altering decision as they entered their first fall at Plymouth High School in 2018. They were coming from a swimming family, but also one that was in the process of producing a college golfer in older brother Jack, who would go on to play at University of Toledo. Both sports at the high school level are played during the fall. They chose golf, and the rest is championship history still being written.

Bridget completed her high school career last fall as the Lower Peninsula Division 1 individual champion, edging Grace by a stroke with a two-round 143 at The Meadows at Grand Valley State University. Bridget’s title run followed an eighth place finish as a freshman and fourth places as both a sophomore and junior. She then was named Miss Golf by the Michigan Interscholastic Golf Coaches Association, and she and Grace both will continue their careers at Oakland University. Bridget will double major in mathematics and computer science with an eye toward a career in the tech industry.

"When I started playing golf, I was constantly told that in women’s golf there were so many scholarships available – because not a lot of girls play golf – and that’s all because of Title IX. Golf was one of those (sports) that universities needed more female athletes. … I was always told that you should definitely play in college, and it’s a great opportunity. And especially with my brother, who played in college, he had a good experience. It was definitely a motivator to keep going – one day, if I keep improving and if I keep getting better, I could play at that next level. And the opportunity was there for me.
I don’t think of myself as an example for other people, but ... I played with one girl a couple of tournaments ago, and she’s a couple years younger than I am, and I later found out that her mom told my mom that she really looks up to my sister and I just because we’ve played at the highest level. I definitely didn’t see myself as that, but looking back, I’m kind’ve honored that she thought of me that way."