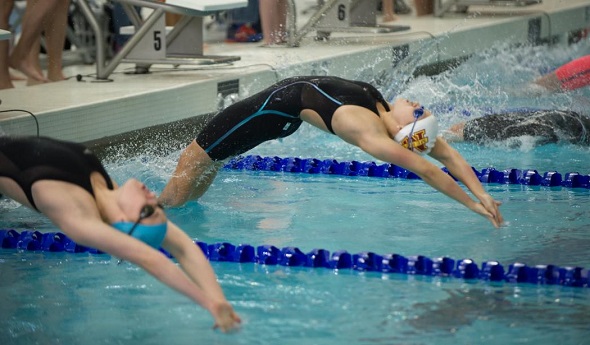 Unbeknownst to Minnich, Venos had known Minnich a decade before she became one of the state’s top swimmers.

Minnich, a junior, is an emerging swimming superstar in a state that has produced such nationally renowned athletes as Olympian Allison Schmidt of Canton and, more recently, Waterford’s Maddie Wright, who now competes for the University of Southern California and was a semifinalist at the 2016 Olympic trials.

Minnich’s main event is the 100-yard backstroke. Her best time is 54.67. She placed first in that event at the Lower Peninsula Division 1 Finals her freshman and sophomore seasons. In addition, she was a part of Mercy’s 200 medley relay teams that also took first place the last two years. Last season the relay team set an LP Division 1 Finals record with a time of 1:44.44.

Enter Venos. The longtime successful swim coach at Birmingham Brother Rice (his Warriors have won the last three LP Division 1 titles) took over the Mercy program this season for Shannon Dunworth and has the Marlins in position for a third MHSAA team title in the past six seasons. Mercy, under Dunworth, won LP Division 1 titles in 2011 and 2013 and was runner-up in 2012 and 2014.

This season’s Division 1 Finals will be held Friday and Saturday at Oakland University.

“Jackie Smith was her babysitter,” Venos said. “Jackie graduated from Mercy (2002) and I knew her through the Village Athletic Club, where she swam.

“And my kids, my youngest two, swam with (Minnich). I have a son who’s a sophomore at Brother Rice and another who’s in the eighth grade at (Birmingham) St. Hugo.

“Swimming is a small community. Everybody smells like chlorine. But it’s a good community.”

Minnich credits her parents for opening the doors for her in the world of athletics. Her father, John Minnich, is a PGA professional and former head club professional at a few country clubs in the area including Indianwood Golf and Country Club in Lake Orion. He’s the current boys golf coach at Bloomfield Hills Cranbrook Kingswood.

“My parents wanted me to be involved, be a part of a team and learn what that means,” Minnich said. “My mom wanted me to take (swimming) lessons. I was 3 then. She thought it would be a life skill.”

At this same time, Minnich also began playing soccer. She had fun playing both and made friends playing each. Two years later she began swimming competitively with the Birmingham Blue Dolphins. At age 7 she began competing year round.

“I’ve always been focused,” she said. “Skipping swim practice was never an option. I set my goals, for all different things. I set goals for times, (making) cuts for different U.S. meets.

That’s the idea. Minnich is continually trying to get better. It’s not something she consciously thinks about. In the pool it’s all about repetition and concentration. Get distracted and the race could be lost. Minnich races against herself, not the swimmer next to her.

“I like to use the phrase, swim in your own lane,” Venos said. “She swims in her own lane. You don’t let anything affect you. You don’t think about the person next to you. The minute you get into trouble is when you’re trying to control those things you can’t control. If you’re in a place where you are in a process, doing the things you need to do, you’re in a good place.”

Venos said swimming is an odd sport. One reason: A swim team practices 16 weeks for one event – the MHSAA Finals. In Michigan there are no Districts or Regionals for which to qualify. Sure, there are invitationals and league meets, but no meets where a qualifying time is required. Venos likes it that way. He said some states use Regionals, much like in track & field, to qualify for the Finals.

Venos also noted the oddity when describing the individual aspect of the sport in relation to that of the team.

“Swimming is unique in that way,” he said. “It’s a stupid sport. You’re out there by yourself but you would not be as successful without being with your team.”

Minnich understands this and said she’s more proud of her relay team’s title in the 200 medley than she is of her backstroke titles. It gets back to why she swims. She has fun.

“What makes a great swimmer is they want to be great,” she said. “And (to reach that level) you have to allow others to help you to reach your goals. That’s why it’s special at Mercy. We’re like sisters.”

Nationally, Minnich, 16, has competed in the U.S. Junior Nationals in Minnesota and this past August she placed seventh in the backstroke at the 18-and-under YMCA Nationals in Greensboro, N.C.

This week all of her concentration is on the MHSAA meet and, hopefully, improving her times.