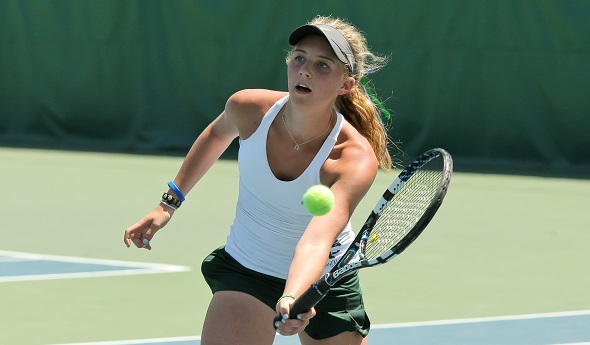 KALAMAZOO — On a hot, sunny Saturday afternoon, coach Jeffrey Etterbeek was unexpectedly doused with an ice-water bath by a group of cheering, laughing, enthusiastic girls on the Stowe Stadium tennis courts at Kalamazoo College.

“Four-peat is pretty extraordinary, pretty special,” Etterbeek said. “Not many athletic teams can do that, so they can boast they did that.

“Other teams and other players are good out here, and you’re going to take some bumps along the way. I think winning is contagious. You get ahold of a little bit of it and you want to do some more. It’s fun to win.”

Cranbrook-Kingswood led by six points after Friday’s action which ended with the quarterfinals, and clinched the title during Saturday’s semifinal rounds. The Cranes totaled 35 points, followed by Detroit Country Day with 24, Grand Rapids Christian with 20, Allegan with 18 and Pontiac Notre Dame Prep with 15.

This is the third time Cranbrook-Kingswood has won four straight MHSAA team titles, and only the 13th time a streak that long has been achieved by a Lower Peninsula girls tennis team.

The title was bittersweet for senior Alex Najarian, who owns three individual MHSAA titles, all at No. 1 singles, and did not lose a match in four years heading into Saturday’s final.

Najarian, the top seed, was upset 6-2, 6-1, by sophomore Sara Daavettila, the second seed from Williamston.

Daavettila, who ran down everything Najarian threw at her, was playing her first season of high school tennis after being home-schooled last year. 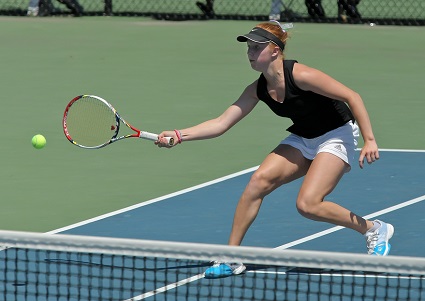 “I knew Alex was playing, and it would be a good year for some good competition to play her before she goes off to (University of) Michigan,” Daavettila said of choosing high school this year. “I thought it would be fun.

“I’ve known her ever since I was little. I grew up playing with her in USTA events. We’re good friends. I just focused on the ball and not who she was, and it worked out. In the first few games, I was on a roll and playing well and hitting well. I was positive and saying I can beat this.”

Najarian said she felt a lot of pressure going into the final.

“I didn’t play my best, but she’s a very good player and I’ve played her before,” she said. “I’ve had a lot of close matches with her before and beat her twice. I knew coming in it was going to be tough, and it made me more nervous.

“There’s a lot of pressure because you’re the senior and you’ve never lost a match.”

Etterbeek said Najarian has been a key to Cranbrook-Kingswood’s success.

“She just ran into a buzz saw today,” the coach said. “The girl played as good as she possibly could have played. Alex should not hang her head. She’s meant everything to this program. She’s brought incredible leadership.

“That’s the only match she’s lost. That one match doesn’t diminish what she did by any means. We’re very proud of her accomplishments at the school.”

Williamston coach Steve Stanley said on a scale of 0-100, “I have helped (Daavettila’s) tennis game ‘zero.’  She’s had great coaches. She’s not only a great tennis player, but she’s very positive and incredibly enthusiastic for the team.

“She hits with her mom (Breita Daavettila), who was a competitive tennis player, and they have a court at their home. It’s mostly her mom and Tom Walker (coach at Court One in Okemos).”

The No. 2 singles final was one of the first on the court and, two and one-half hours later, the last one off.

Anna Short, the top seed from Cranbrook-Kingswood, defeated Country Day’s Haley Mullins, the second seed, 3-6, 6-2, 7-6 (4) for her second consecutive title at No. 2 singles. Both are sophomores.

“It was much more challenging this year,” Short said. “Haley just gets everything back. Plus the weather. It was just so hard. She played great.”

After losing the first set, “I kinda was just excited and hitting way too flat and hard. In the second set, my coach Steve Herdoisa told me to back off the pace and spin high and deep and then come in, and that helped a lot.”

“She got a little bit more aggressive,” Mullins said. “She changed it up a bit and (hit) more lobs inside. She kept the point in play longer.

“It was a great match and she hit some wonderful shots at the end and I think that’s what made the difference, the last couple shots when it really came down to it.”

Many of the players also compete in USTA tournaments, but there’s a big difference, Short said.

“You have so much support being a team,” she said. “There’s the parents, obviously the players and when you’re on a court next to a teammate and they’re cheering you on when you’re down 3-6 in the first set, it’s pretty nice. In the USTA, you’re alone and you’re the only one cheering yourself on.”

Country Day started Saturday with 18 points, tied with Allegan and just one point ahead of Grand Rapids Christian. Although Cranbrook-Kingswood led by just six points after the first day, the Cranes had players in all eight semifinals flights.

“We screwed up a bit (Friday) with a couple of our doubles teams,” Country Day coach Jessica Young said. “We knew we had to be perfect today and (Cranbrook-Kingswood) had to take some early losses, and you can’t rely on someone taking losses. So we put ourselves in that predicament early on.

“We haven’t finished second in a lot of years, and I’m so proud of them. They fought really hard today. We had our 3 doubles (sophomores Sharmila Prabhu and Lydia Wang) make it to the finals, which wasn’t expected. Our 2 singles (Mullins) fought so hard in the heart-breaker. She’s such a fighter, and I’m so proud of her.”

“I know Maddy very well and I know she’s a great player, so I was expecting a tough match, actually,” said Karoub, a Country Day senior who ended her high school career with her third Finals individual title.

“She lives in my area, so we practice together. I just played a good match. We had some really good points; I just finished them out. Of the three titles, this is the most important to me, so I’m happy to pull it out. It’s my last year playing. I’m not playing college tennis, so it’s my last team thing.”

Winarski, who was wearing a knee brace following the match, said she didn’t expect to make it as far as the finals.

“I expected to do well, but not this well,” she said. “I’ve been playing for a while, so I’ve been training for it. USTA helps a lot for the experience, but I wanted the team experience. I’ve never been part of a team.”

“This is the best finish we’ve ever had at a state tournament in school history,” he said. “A fifth place tournament, not bad at all with the range of talent here.

“(Winarski) started the season hurt. She had shin splints. When we did our challenge matches, she was losing. She wasn’t really ready to play until after Easter, and she raised her level up to No. 3 singles and I’m not surprised. She’s a fighter, and the nice thing is she’s a freshman.”

“We played two times before and I lost both times, so this was good.”

Teste said in spite of losing, she was thrilled with the team’s four-peat.

“I didn’t work as hard as I could,” Teste said. “I fell for some of her traps, her slices. This is the first state (tournament) that I have participated in and won. I’m really excited.”

Cranbrook-Kingswood won three of the four doubles flights with juniors Meg Phyle and Amanda Simmons winning at No. 1, senior Holly Meers and sophomore Amanda Twu at No. 2, and senior Lauren Lanzon and freshman Mackenzie Beckett at No. 3.

PHOTOS: (Top) Cranbrook Kingswood's Anna Short prepares to return a shot during a No. 2 singles match Saturday en route to winning her flight. (Middle) Williamston's Sara Daavettila volleys during her run to the No. 1 singles championship. (Click to see more at HighSchoolsSportsScene.com.)