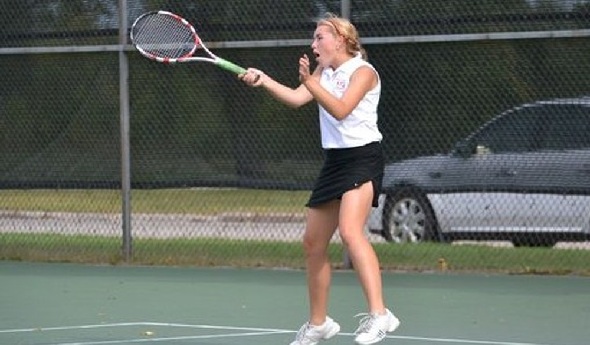 At the end of every fall, Escanaba native Denny Lueneberg heads back to California after another summer in his hometown and fall coaching the Eskymos girls tennis team.

A tennis instructor in Palm Springs who played at Western Michigan University, he’s seen plenty of talented players over the decades. So his final thought to Escanaba senior Codi Jenshak before he departed this month was especially meaningful.

Lueneberg told Jenshak he used to consider her a softball player who also plays tennis – which made sense, since Jenshak pitched the Eskymos to the Division 2 Quarterfinals this spring.

But after this fall, Lueneberg said he now sees Jenshak as a tennis player who plays softball – a seal of lasting approval on a career that included three MHSAA singles championships, including MHSAA Upper Peninsula Division 1 titles at No. 1 the last two seasons.

“I felt like I finally had done what I needed to do, for him to think that,” Jenshak said. “He takes tennis very seriously. He always thinks no one could ever play enough. He has pretty high expectations.

“When he told me that, it was just special.”

Jenshak receives a Second Half High 5 for repeating as the best player in the Upper Peninsula Division 1. And as a sophomore, she won the title at No. 2 singles.

As a freshman, Jenshak played mostly No. 4 doubles. After all, she was just starting to learn the game.

Jenshak had played for fun and attended one of Lueneberg’s beginner clinics when she was young. But nothing serious – until Lueneberg saw her hitting with her dad one summer and encouraged Codi to come out for the high school team.

He knew he could teach her the shots. What caught his eye was how she reacted to and pursued the ball, like a softball infielder making a play.

After a mostly uneventful freshman year, Jenshak lost a close match to start her sophomore season and then beat the same player handily in the MHSAA Final. She split four matches with Kingsford’s Sam Fleming as a junior, but beat her when it counted – in the championship match.

This season she beat Fleming all five times they faced each other, including 6-1, 6-2 in the Final, and finished 18-2 overall. Her losses were to Iron River West Iron County’s Kylee Erickson, the U.P. Division 2 champion – Jenshak finished 1-2 against her this season.

Jenshak did beat Erickson in their first meeting, but then lost to her four days later. Jenshak didn’t speak much with Lueneberg for three days after that – and that hammered home again how seriously she took her “other” sport.

“She processes things. I don’t know where that came from … but you can explain things or maybe try to do things with her in tennis that other players are not capable of doing in terms of strategy and shot selection,” Lueneberg said. “She’s willing to do that. It cost her a couple of matches her junior year, but by the end of the year she was doing those things and becoming a better player. … (And) by no means has she reached her potential.”

Jenshak also plays basketball, and sees crossovers among all of her sports.

She picked up tennis quickly, just as she’s been able to pick up other sports. She has a similar point in both her overhand throwing and serving motions where her arm slows down. The lateral movement she uses as an occasional second basemen is similar to that employed on the tennis court or even defending a basketball opponent.

Her strengths and weaknesses correlate for all three. She uses the same steady work ethic to fix the bad and hone the good.

Girls tennis is played in the spring in the Lower Peninsula, so Jenshak hasn’t gotten a chance to see how she’d compare against top players from downstate. She did get that chance in softball, leading her team before it fell to eventual Division 2 runner-up Saginaw Swan Valley in the Quarter at Central Michigan.

“I’m actually pretty curious. I played a lot of softball in lower Michigan, played a lot in Wisconsin and Illinois and other places, so I can see where my talent stacks up against other people,” Jenshak said. “But in tennis I can’t. We don’t get out as much. … I’d love to see how we would stack up. We just never got the opportunity.”

She might get a better gauge next season if she decides on a small college – she’s received interest at that level for both sports, and is considering playing both. Or she might go to Central Michigan and attempt to walk-on the softball team and play on the school’s club tennis team.

“If she wanted to commit to this sport, she has the skills and the athletic ability. She’ll obviously get better and enjoy the game at a different level,” Lueneberg said of Jenshak's tennis potential.