Duane Haring first took over the Grand Ledge gymnastics program in 2002 because his daughter Allison and her friends kept asking. He left to work as an assistant coach at Michigan State from 2005-06 -- but realized Allison and her teammates were on to something.

This winter's Team Final came down to Grand Ledge's last apparatus, bars, after a below-expectations performance on vault. But just as they have for a decade, Haring's Comets came through when it counted. And although Allison graduated nearly a decade ago, Duane plans to keep the winning streak rolling for years to come.

What was the conversation you had between your third and four apparatus? How would you paraphrase it?

I was sitting with the parents and I told them I was really angry because we can vault. We're a good vaulting team. I think we're the best vaulting team in the state, and we didn't do it. So I told them I just have to go for a walk, because I can't talk to them right now. I started to walk way, and I thought, “Oh yes I can.” I dragged them off the bleachers, and went out in the hallway. Trust me; they were wide awake for bars. They understood, loud and clear.

I know what they can do. All year I've been waiting for them to do bars like that.

Are all these championships different for you, or are they the same?

How do you get them to come back and want to do six?

We lit a fire under them when we first did this. The community loves these guys. Most communities talk about football and basketball, and they still do. But more and more people in Grand Ledge talk about gymnastics. Almost everywhere you go, how about that gymnastics team? They're 75-0 ... that's in the paper, and people pay attention to that. They're into their gymnastics team in Grand Ledge.

Does this make you happy you came back and did this a second time? 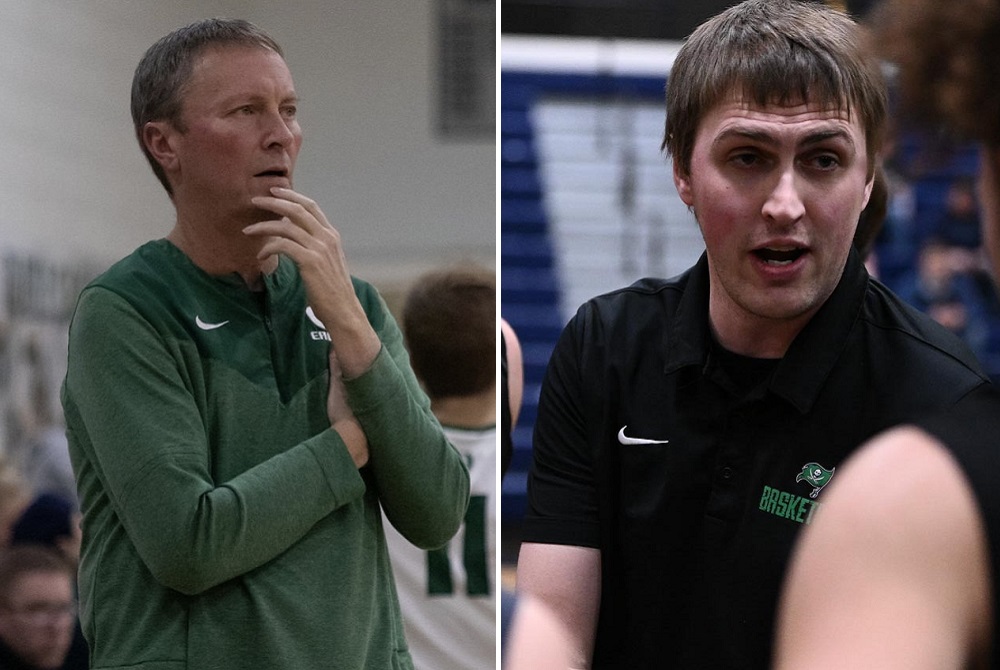 Matt and Derek Seidl have a lot to talk about these days.

The father and son duo both have highly-ranked, undefeated basketball teams going into the first full week of February, something neither of them saw coming.

“We were hoping for a season like this, but you never think about winning this many in a row,” said Matt Seidl, the father and head coach of the 15-0 Olivet Eagles. “When our season ended last year, we knew our top seven players would all be returning.”

About 50 miles south of Olivet, in Jackson County, Derek Seidl has the Napoleon Pirates off to a 14-0 start. They are sitting on top of the Cascades Conference.

“We have a really talented group right now,” Derek said. “We were 19-3 last year and brought six guys back. Having that experience has been very valuable.”

Olivet is ranked No. 2 in MPR in Division 2 while Napoleon is No. 9 in Division 3. Both are top-10 teams in the latest Associated Press polls as well.

Matt Seidl, 60, graduated from Ypsilanti Lincoln High School in 1981 and went to Eastern Michigan University to become a sportswriter. He didn’t begin teaching until he was in his early 30s, but, by then, was already a veteran coach.

“It was getting difficult because I was always leaving my job to go coach,” he said. “I decided to go and get my teaching degree.”

He wound up in the classroom, which enabled him to dive deeper into coaching. He spent several years coaching at the middle school and high school levels, boys and girls, with stops at places like Pinckney, Ypsilanti, Manchester, Willow Run and Romulus. He was the JV boys basketball coach at Dexter when his son, Derek, made the team as a freshman. 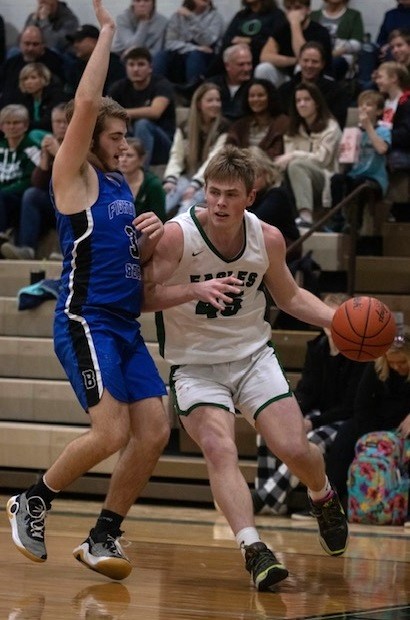 By then, Derek already knew he would be on the bench one day as a coach.

“I played for my dad in youth travel stuff, and he was on staff for one year my freshmen year of high school,” Derek said. “He was a varsity coach all growing up. I was always at games. I loved talking to him about the game, the strategy of it, the Xs and Os. Even when I was younger, I thought about coaching someday. Growing up if you would have asked me what my dream job was, it would have been a teacher and coach.”

Derek, 27, graduated from Dexter in 2014. He played four years of college basketball at Lawrence Tech University. After getting his master’s degree and teaching degree, he got his first coaching job as an assistant coach at Chelsea, under Josh Tropea, who also had coached with Matt.

Derek’s first teaching and head coaching job came at Springport in 2019-20. This is his third year at Napoleon.

“It’s been a really good fit here,” Derek said. “Before I started looking into the job, I barely knew anything about Napoleon. It has worked out well.”

Matt is also the athletic director at Olivet. If he would have had his way, Derek would be coaching at Olivet.

“Derek did a really good job at Springport, and we had an opening and he interviewed and was recommended for the job, but before they offered it to him, Napoleon hired him,” Matt said. “He would have been the perfect choice to teach math and coach basketball.”

With Derek no longer in the running, Matt came out of coaching retirement and was named head coach.

“It was going to be a one-year deal, sort of a band-aid to get us to the next year,” he said.

Instead, Matt’s stayed on and put together quite a successful team. The Eagles have gone 47-6 since the start of the 2020-21 season. This year’s team has taken a big step.

Drew Priddy, a 6-5 senior center, is averaging about eight points and seven rebounds a game, and junior guard Bryce Wine is averaging nine points a game and leads the team in 3-pointers.

“We had quite the youth movement a few years ago,” Matt said. “We go 8-9 deep now and have a lot of experience. Having those young guys play a couple years ago is paying off. 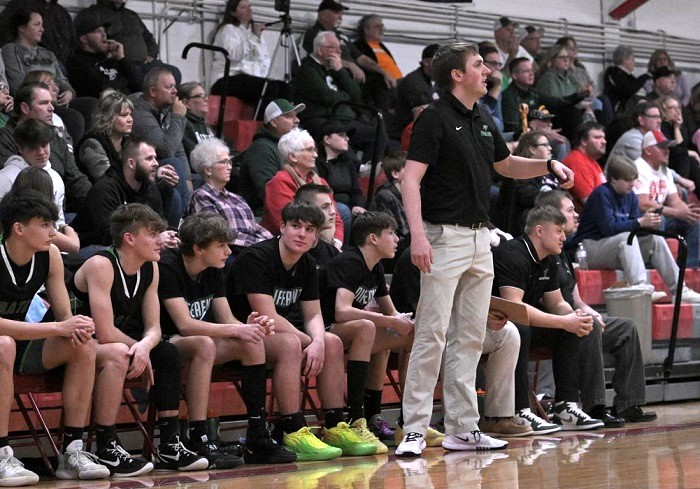 “I definitely keep track of them,” he said. “We talk on the phone on a daily basis – 30 minutes about Napoleon and 30 minutes about Olivet. We bounce things off each other. We run a lot of the same stuff as far as systems. We’re very connected on things.”

Matt and Derek’s teams tried to have a good old-fashioned scrimmage, or exhibition, last year but – with Derek’s team ahead – Matt received two technicals and got kicked out of the game. It’s a fun story for both to tell now.

“That was wild,” Derek said. “It was a cool thing we had going. We were winning so I was enjoying it, but that put a whole different spin on the situation.”

Matt said they probably won’t do that again. Probably.

“My wife said no,” he said. “Derek and I have talked about it, but I don’t know that it would ever happen.”

Derek said one day he’d like to coach with his father.

“I’m very energetic and into it, just like he is,” Derek said. “There are some similarities. I played for him and watched him a lot. I try and pull some of the things he does, being prepared. We get along super well. I don’t know if I could trust him to not get technical fouls.”

Napoleon has a core group of four players with a ton of experience.

Devonta Habern is a 5-11 junior who is on the varsity for the third year and runs the show at point guard. Six-foot-5 senior Trent Jester is one of the best big men in the conference. University of Michigan baseball commit Grant Bradley is a three-year varsity starter and outstanding athlete. Holden Vanpoppel is an all-state track athlete who has turned into a pretty good basketball player.

“Grant is super steady and having a great year,” Derek said. “He looks like he’s been in the weight room since he was 5 years old. He can guard anybody. Vanpoppel is an unbelievable run and jump athlete. All four of these guys are averaging in double figures. They are really good athletes who have invested in the program and put the time in.”

“We’ve got a very talented group,” Derek said. “They are a little looser than I am. I tend to be very calculated, kind of analytical and serious. They like to goof around a little bit. They keep me even-keeled. They know when to get serious. It’s good for me to have a group like that.”

Derek said his squad wants to exceed expectations this year.

“We talk about that after every game – don’t be satisfied just because we are undefeated,” Derek said. “There is plenty more to accomplish. Last year we went 18-2 in the regular season and 19-3 overall, but we didn’t win a league or a District. Our guys have bought into that mindset. That’s helped us get to where we are.”

Matt is keeping a close eye on not only his team, but Derek’s as well.

“I probably get more stressed watching his games,” he said. “I’m really proud of what he has been able to do.”