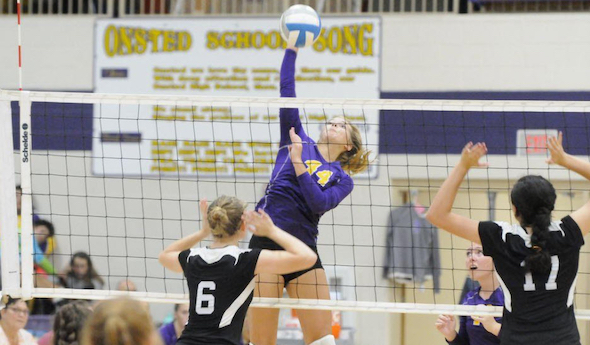 ONSTED – Last season the Onsted volleyball team had about as impressive a season as it could.

The Wildcats started by not losing until early October – a 28-match win streak – and finished with a school-record 50 victories.

What are they doing for an encore?

How about a 24-2 start this fall, a tremendous showing at a big quad in Bronson and they are on the verge of back-to-back Lenawee County Athletic Association titles.

“We’ve played well at times,” Onsted coach Rhonda Hubbard said. “Everyone is making contributions to the team. We’re doing well in some areas. We're attacking the serve and we are doing the things we need to do, and we are winning.”

Hubbard doesn’t want to see such an early exit this time around.

“We can’t just waltz in and let the same thing happen to us this time,” she said. “Yeah, we rolled last year but I know what we are capable of. We have to perform, and we have to be more consistent.”

There was no long win streak to start the season as Onsted lost to Manchester on Sept. 11, the first day they played an official match. Since a loss to Erie Mason at Mason the following day, however, they have won 18 straight.

“We are 21-2, but I don’t think we should have lost to Manchester,” Hubbard said. “We should have had that one.

“We have to start bringing it in practice more often. We aren’t consistent. I can sometimes be unhappy with how we practice. That’s how we are going to improve.”

Mya Hiram and Kayla Ross are the senior co-captains. Hiram was third-team all-state in volleyball last year and followed that up with an all-state season in basketball. She’s bound for a college basketball career – she's committed to Ferris State University – but not before she leaves her mark on Onsted’s volleyball team.

She’s getting close to the career kills record, and she and Ross are Nos. 2-3 on the Wildcats’ career digs list.

The team’s biggest day came at Bronson when the Wildcats beat the host school, Muskegon Western Michigan Christian and Niles. They also beat Homer and Stockbridge earlier in the season and have collected wins over state-ranked Lenawee Christian and traditional LCAA championship contender Ida. Onsted also has a nonleague win over Adrian Madison, who has run its Tri-County Conference winning streak into the 30s. The Wildcats are likely to face the Trojans again in the upcoming county tournament.

Ross and Izzy Kisor both are serving at a 93.8-percent clip, while Hiram has 39 aces, Kate Gorney 21 and Kennedy Ross 20.

In attacking, Hiram has compiled 246 kills, an average of 3.56 per match. Hiram also has 208 digs, which is just ahead of Kayla Ross, who has 200. Kamryn Ross leads the team in assists, at 8.3 per match. Ruby Foster has been “block city,” Hubbard said, and added that Kayla Ross, Kisor, Kennedy Ross and Hiram lead the team in service points.

Hubbard is an Adrian graduate who teaches at Onsted. She’s attended Eastern Michigan University on a track scholarship. She won the 2019 county Coach of the Year award after the team broke the previous school records of wins, 46 from 2012.

Hubbard said the fewer matches this season is affecting the slow development of the team. She did say there is still time remaining for the Wildcats to piece together a stronger ending to the season than last year.

“We are down 33 to 35 sets than last year at this time,” she said. “Teams don’t want to play three out of five. They want to play two of three, which I don’t think a varsity team should be doing, at least on the weekends. Our dates are all full; we just haven’t played as much.”

PHOTO: Onsted’s Mya Hiram unloads over the net for a spike during a past season. (Photo by Dolores Clark-Osborne.)